Two Palestinian men launched an initiative to paint the walls of al-Zaytoun neighborhood to show the world their ability to overcome wars and destruction. 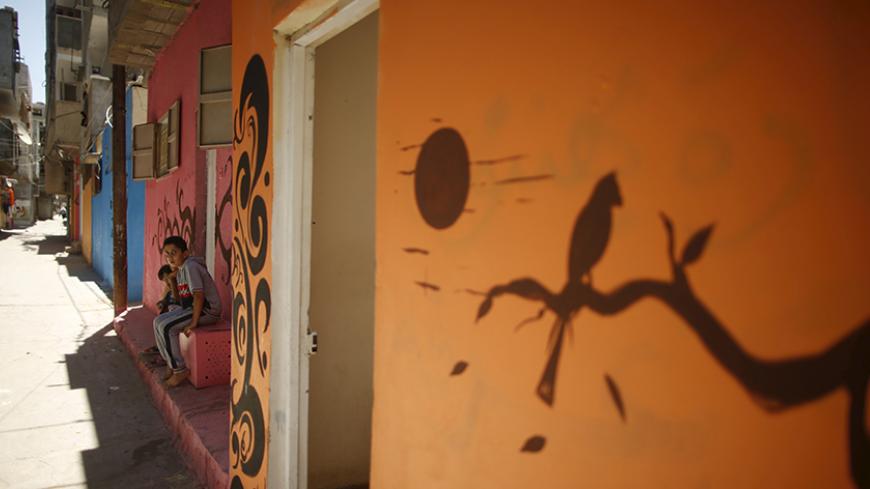 Palestinian children sit outside their house, which was painted by a group of young men as part of a campaign dubbed "Color of Hope," in al-Shati refugee camp in Gaza City, July 7, 2015. - REUTERS/Mohammed Salem 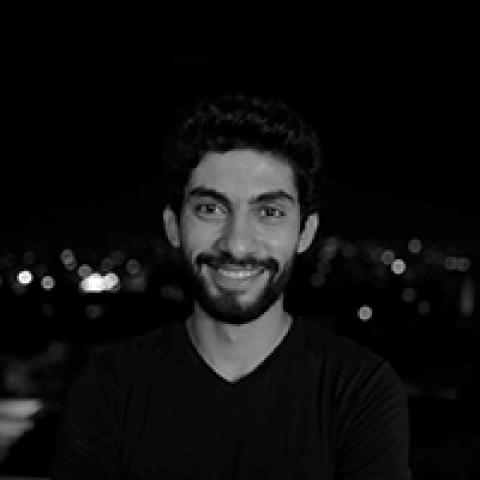 GAZA CITY, Gaza Strip — Inflammatory graffiti that once sprawled across the walls of al-Zaytoun neighborhood has been replaced with bright, inspiring colors, as one form of rebellion has been overcome by another very different form.

Resident Mohammed al-Saidi took the initiative by painting his house to express the ability of humans to overcome the ravages of wars, stand up for themselves and their humanity, and reorganize their lives and societies as they please — and in such a way that generates development. His idea caught on.

In a recent interview with Al-Monitor, Saidi spoke of the artistic initiative that shines from behind the walls of al-Zaytoun, east of Gaza City.

"As you can see, using old paint brushes, simple tools and the initiative's concept, we were able to create scenery through which colors became a revolution. This revolution further expands our awareness and culture, represents anew our openness to life after a year characterized by death, war and destruction," Saidi said.

A painter by trade, Saidi said his idea grew from tragedies he experienced during the latest Gaza war in the summer of 2014. He saw firsthand how sadness prevailed over Gazans amid worsening living conditions, coupled with a lack of any potential reconstruction or peace. As he rebuilt his home some seven months ago, he painted the walls using bright, cohesive, joy-generating colors.

He spoke of the moment when he decided to spread colors to the alleys of his neighborhood.

"Days after I painted the house, my neighbor Imad Nayef asked if I could re-create the idea in his house. This was the trigger that ignited the idea, which quickly moved from one house to another. With the help of neighbors, we painted the walls of the neighborhood. Everyone was helpful. Those who did not have experience in painting helped by moving the paint boxes or offered tea and juice during work. Everyone was indeed positive and wanted to change the surrounding scenery."

Nayef told Al-Monitor, "The most important aspect is that the idea was well-received by the residents. Everyone participated, all joined in the effort and were happy with the social solidarity that was shown, hoping for an intellectual revolution that indeed began to spread to other areas of Gaza — a revolution that founded a system of life with new values and concepts. We saw our children learning new behaviors in a sound way."

"The story about my child Adnan is a clear example," Nayef continued. "During the 2014 war, I spent a lot of time trying to change his behavior, as he was becoming a bit violent toward himself and others. This aspect of his personality somehow toned down once he participated in the painting of the neighborhood. He is keen on using second-hand items and decorating these with innovative handcrafts.”

Saidi relayed his impressions about the effects his idea had when it spread: "The first and second intifadas undoubtedly played a major role in forming the Palestinian culture and the way Palestinians express themselves through writing expressions on the walls of houses calling for confronting the occupation and for national unity. ... We are asked to cope with these negativities, which definitely do not benefit the ambiance we are trying to entrench in our neighborhood to avoid division, rifts and tension tearing down our neighborhood. This is why we decided to clean our neighborhood from the woes of war and the rivalry of parties, by using colors and plants that call for and reinforce the steadfastness of the Palestinians in their land.

Nayef reiterated the importance of the period Palestinians are currently going through. “This period of time is the most suitable to put an end to the misinterpretation of the writing on the walls, which is part of Palestinian culture."

He added, "We decided to paint the walls and decorate them in a decent way for any person or party that wishes to place a poster or paint drawings. This was done to preserve a decent general scene, and the politically oriented residents welcomed this initiative. After seeing the walls well-decorated and painted, none of them would wish to have partisan expressions there again. Humans, by nature, are inclined toward beauty and colors.”

Al-Monitor asked both neighbors about their aspirations and the impediments they face. Nayef explained, "What we did was a quick reaction to what we experienced during the war. Painting the neighborhood was like a psychological therapy to our children and us. What people should express after war and destruction is civility and the ability to recover as human beings who have culture, civilization, values and morals they believe in and want to spread. This is what we aspire to now: to see our idea shining like light in all the neighborhoods of Gaza, and especially the poor ones.

"Colors should shine where the poor live, as the siege aims to abolish this group and render their future more bleak. However, a clean and colorful neighborhood, surrounded with plants and flowers, can make their life more bright.”

Despite a lack of resources, people are pitching in and recycling all types of items as decoration, Nayef said. He pointed out car tires that were about to be recycled and old stones that he had seen many times on his way to the market. Now he cleans the stones and displays them as artifacts.

For his part, Saidi said, “My ambition extended beyond the walls of the neighborhood where I live. So I asked for the help of a local association that supports social projects. This association provided the tools and volunteers to help me paint other parts of the neighborhood. This association also helped spread the initiative to paint neighborhoods in other areas in Gaza. A large part of Gaza’s port was painted, as well as the trailer park set up for those who lost their homes during the latest war in 2014, in Khuza’a village.”