Predictably, though neither Egypt nor Saudi Arabia has been enthusiastic in its response to the Iranian nuclear deal, Egypt has so far been vaguely more welcoming. 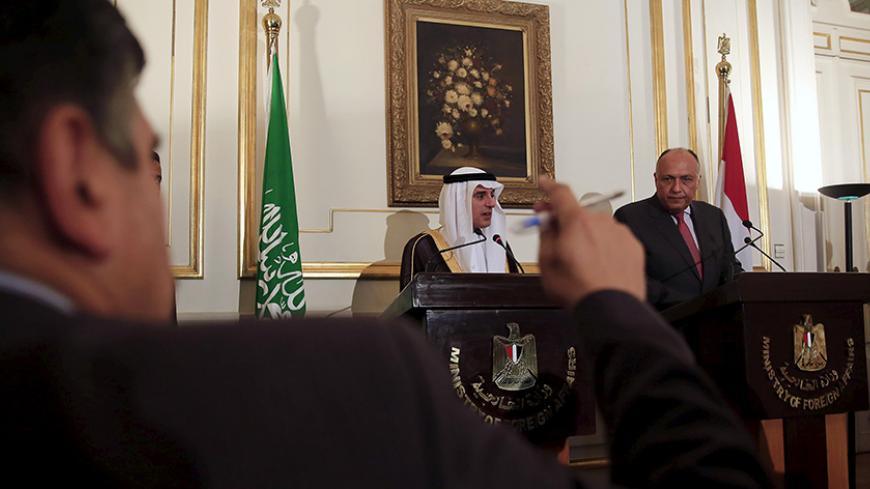 Egypt's Foreign Minister Sameh Shukri (R) and his Saudi Arabian counterpart Adel al-Jubeir listen to a journalist's question during a news conference at the ministry of foreign affairs in Cairo, Egypt, May 31, 2015. - REUTERS/Amr Abdallah Dalsh

CAIRO — Iran and six world powers reached a nuclear deal July 14 after more than 10 years of negotiations, an agreement that could potentially change politics in the Middle East.

The nuclear deal does not only concern Iran and the major powers, but also other states in the Middle East such as Israel, Saudi Arabia and its allies in the Gulf Cooperation Council.

Saudi Arabia did not welcome the deal and publicly announced its doubts about Iran’s intention to abide by it.

Saudi Foreign Minister Adel Al-Jubeir met July 17 with US President Barack Obama at the White House. Jubeir told Obama, “The biggest problem in the Iranian deal is making sure that its provisions are being implemented, in light of the international inspectors’ inability to monitor Iran’s program.”

Jubeir also met with US Secretary of State John Kerry in Washington July 16 and said his country “is ready to firmly confront any inappropriate Iranian behavior in the region.” Jubeir called for continuing “with the sanctions imposed on Tehran because of its support for terrorism.”

Saudi Arabia has been known for accusing Iran of supporting terrorism. Jubeir said in a press conference with his Egyptian counterpart, Sameh Shoukry, in Jeddah on July 24 that “Iran's interference in the regional Arab countries’ affairs and disturbance is a big problem.” He added, “Iran is a source of concern for the neighboring countries, given its support for terrorism.”

One day after the conclusion of the nuclear deal, the Egyptian Foreign Ministry issued a statement describing the deal as an “important development” and expressing Egypt’s hope that the deal will "contribute to the achievement of security and stability in the region.” The ministry stressed that it is still studying the terms of the deal.

However, after the issuance of this statement, the Egyptian Foreign Ministry has not brought up the nuclear deal again.

Ambassador Badr Abdel Ati, the spokesman for the Egyptian Foreign Ministry, told Al-Monitor over the phone that “Egypt contented itself with the statement it issued earlier regarding the Iranian nuclear deal and hoped the agreement would be a step to clear the area of nuclear weapons and stop the arms race.”

Asked whether Cairo has taken a position different from that of its ally Saudi Arabia on this matter, Abdel Ati said, “The relationship between us and Saudi Arabia is based on a convergence of opinions and not on similar opinions.” He explained that there are coordination and consultations between Egypt and Saudi Arabia on the issues of concern to the Middle East.

Mokhtar Ghobashi, deputy head of the Arab Center for Strategic and Political Studies in Cairo, told Al-Monitor that Egypt and Saudi Arabia have divergent opinions. According to him, this divergence is not limited to the Iranian issue but also covers the Syrian issue, since Cairo is seeking an unconditional political solution that preserves the unity of the Syrian land, while Riyadh believes the solution starts with the ousting of President Bashar al-Assad.

Ghobashi added, “There is another point of divergence in the relations between each of Egypt and Saudi Arabia to Turkey, since a major political crisis is flaring up between Cairo and Ankara in light of an undeclared alliance between Saudi Arabia and Turkey.”

Ghobashi believes the Egyptian and Saudi positions toward Iran have been, for decades, wide of the mark. He explained, “These two Arab states have indulged in hostility toward Iran to please the United States, but with the conclusion of the nuclear deal, they found out they lost. They have yet to make up their minds: Will they sit with Iran or maintain their hostility? This explains the difference in opinion on the nuclear deal so far.”

For his part, Fathi al-Maraghi, a professor of Iranian studies at Ain Shams University, said that Egypt and Saudi Arabia do not publicly reject the nuclear deal but have great concerns regarding the post-deal phase.

Maraghi told Al-Monitor, “Iran is the biggest winner of the deal. The economic sanctions against it will be lifted, and it will be able to maintain its policies of interfering in the affairs of Arab countries, which is a matter that was not discussed in the nuclear deal.”

Iranian Supreme Leader Ayatollah Ali Khamenei said in a July 18 speech that Iran will not stop supporting its friends in the region such as Palestine, Yemen, Syria, Iraq, Bahrain and Lebanon. His statement was denounced by Egypt, Saudi Arabia, the Gulf Cooperation Council and the League of Arab States.

Maraghi described Iran's post-deal future as becoming a superpower and said it will keep invading the privacies of regional countries. He confirmed that it is necessary for Egypt and Saudi Arabia to act as a united front to urge the West to negotiate with Iran once again to ensure its non-interference in the affairs of Arab countries.

Perhaps the Cairo Declaration for a joint military force between Egypt and Saudi Arabia, announced July 30, is the first step in coordination between the two countries in their dealings with Iran. This declaration specifies in its preamble that the two parties confirm their keenness to exert all efforts to promote security and stability in the region, work on Arab national security and resist attempts to interfere in the internal affairs of Arab countries.

The former Egyptian ambassador to Iran, Mahmoud Farag, believes the nuclear deal is “an achievement for Iran" and denies Iran could exploit the deal to "threaten the security of Saudi Arabia, because the Western allies of Saudi Arabia won’t allow it.”

Asked about the Egyptian-Saudi divergence, Farag told Al-Monitor, “Riyadh attacks while Egypt remains silent. This is a tactical difference used so as not to close all possibilities of dialogue and pressure Iran.”

The differences in the ways Egypt and Saudi Arabia are approaching the Iranian nuclear deal are nothing new. The two countries deal differently with the Syrian issue, ties with Turkey and the Palestinian Hamas movement. Although these issues are sensitive for both countries, they confirm on every occasion that ties between them are strong.