Morocco is spending upwards of $3 million a year to convince US politicians – including presidential hopeful Hillary Clinton – to back its claims over the disputed Western Sahara. So far, it’s working. 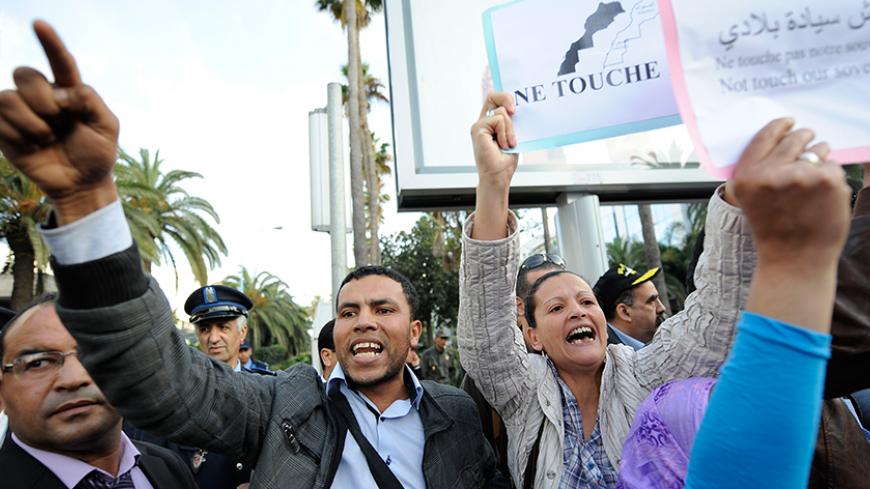 Moroccans hold signs during a protest against US-backed plans to broaden the mandate of UN peacekeepers in the disputed Western Sahara, in Casablanca, April 22, 2013. - REUTERS/Youssef Boudlal

Morocco's massive lobbying blitz is paying hefty dividends as Congress and Barack Obama's administration increasingly side with the US ally in its claims over the disputed Western Sahara.

The North African kingdom spent $3.1 million last year building support for its exploitation of the resource-rich territory it has occupied since 1975 and claims as its own. While officially the United States still supports a long-delayed referendum on independence — it backed another extension of the UN monitoring mission in April — key policymakers are embracing the status quo.

Pending foreign aid bills in the House and Senate both call for US aid to Morocco to be spent in the disputed region. The move amounts to a de facto recognition of Rabat’s sovereignty over the resource-rich territory.

The change in policy was first introduced into last year’s omnibus spending package at the behest of House Appropriations member Mario Diaz-Balart, R-Fla., a longtime Morocco champion, and was repeated in the current bill. The Moroccan-American Center for Policy (MACP), Rabat's main lobby shop, has had no fewer than 25 meetings, calls and email exchanges with Diaz-Balart and his staff in the six months to April 30, lobbying records show.

Democrats' loss of the Senate in the 2014 mid-term elections has also been a boon for Morocco. Last year's Senate foreign aid bill contained a provision — never enacted — prohibiting the administration from procuring "defense articles or services for use in the territory of the Western Sahara," but that language is gone now that subcommittee chairman Patrick Leahy, D-Vt., has surrendered his gavel.

The Obama administration is following suit.

The US Export-Import Bank approved a $92 million long-term guarantee last year for a Moroccan fertilizer giant that exploits the region’s lucrative phosphate mines. And the State Department now says that it is "currently determining" how to move forward, however reluctantly, with economic assistance to the Western Sahara "as required" by the spending law.

Morocco has also sought influence with America's potential next president. The state-owned Office Cherifien des Phosphates paid $1 million for the Clinton Foundation to host its first-ever Middle East and Africa forum in Marrakech.

The move backfired, however, by drawing attention to Morocco's controversial exploitation of the Western Sahara amid ramped up scrutiny of Hillary Clinton in the run-up to the 2016 elections.

The lobbying campaign is spearheaded by the MACP, which was created in 2004 and is part of a trio of associations that promote closer political, business and cultural ties with the United States. The center works with three US lobbying and public relations firms and has also hired several subcontractors to help present its case to policymakers and the public.

The special relationship has reaped many dividends over the years.

Morocco remains the only country in Africa to have signed a Free Trade Agreement with the United States, back in 2004.

The country has also gotten the green light to develop a second Millennium Challenge Corporation grant, despite concerns about its human rights record. This follows an initial $700 million development grant — the largest ever — that helped Morocco develop its fruit tree businesses, fisheries and artisan crafts.

Meanwhile, the Commerce Department has helped organize trade missions with US firms, helping Morocco market itself as a gateway to the African market.

Relations with the United States in the past have been marred by criticism of Morocco's record on religious rights, particularly after the expulsion of 49 American Christians accused of proselytizing in 2010. Since then the furor has largely died down, despite recent reports that non-Muslims continue to suffer discrimination.

The Western Sahara remains the biggest recurring source of friction.

Tensions with the United States came to a head in 2013 after the Obama administration proposed creating a human rights monitoring component to the UN mission that oversees plans for the referendum. The administration quickly backed down after angry objections from Morocco, which canceled participation in its annual "African Lion" war games with the United States over the spat. The joint exercise is now back on track.

Obama made clear his intention to put the issue to rest during his meeting with King Mohammed VI at the White House a few months later. Spokesman Jay Carney at the time reiterated the administration's support for Morocco's proposal plan for an autonomous Western Sahara under Moroccan sovereignty.

"The US has made clear that Morocco's autonomy plan is serious, realistic and credible," Carney said, "and that it represents a potential approach that could satisfy the aspirations of the people in the Western Sahara to run their own affairs in peace and dignity."

Critics say the plan isn't credible at all, because it rules out a referendum on independence. The pro-independence Polisario Front and its ally, Algeria, have launched their own lobbying campaigns to counter Morocco's influence, with dwindling success.