Lebanon’s central bank and its private financial firms are spending big money to prevent US pressure from unraveling one of the only sectors that still functions in the politically gridlocked nation. 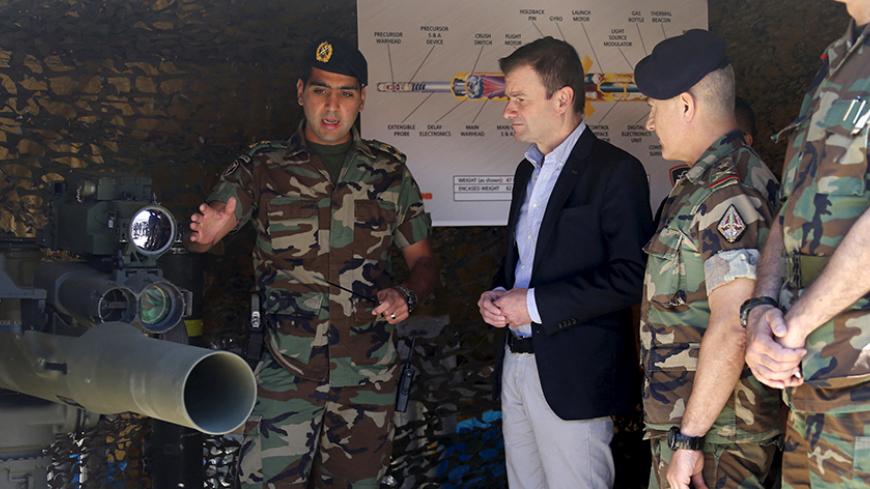 A Lebanese army soldier speaks to US Ambassador to Lebanon David Hale (2nd L) during a demonstration of TOW-II missiles, which were donated by the US government to the Lebanese army, in the Taybeh range in Baalbek, June 10, 2015. - REUTERS/Mohamed Azakir

The Obama administration is determined to prevent the conflict in Syria from taking down its tiny neighbor to the south.

At least 1.2 million refugees have poured in over the past four years, accounting for more than a quarter of Lebanon’s population. The politically fractured country, which has been without a president for more than a year, has been left increasingly unable to cope.

The threat of violence also continues to loom on the horizon as Sunni extremists threaten the Shiite militants of Hezbollah with retaliation for their role in propping up President Bashar al-Assad in Syria. Partly as a result, the State Department in late May renewed its advisory to avoid “all travel” to the country.

“Sudden outbreaks of violence can occur at any time in Lebanon, and armed clashes have occurred in major cities,” the travel warning states. “The potential for violence between Hezbollah and other extremist groups throughout the country remains a strong possibility.”

The United States has responded with massive amounts of humanitarian aid. Since the start of the war in Syria, Lebanon has received $792 million — more than any other country — to help deal with the refugee situation.

The State Department is also seeking to increase bilateral aid by 35%, to $211 million, in its proposed budget for the fiscal year that starts Oct. 1; $80 million of that would be earmarked for support to the Lebanese armed services, seen as a nonsectarian alternative to Hezbollah’s armed brigades.

“The question of how best to marginalize Hezbollah and other anti-US Lebanese actors without provoking civil conflict among divided Lebanese sectarian political forces remains the underlying challenge for US policymakers,” the Congressional Research Service writes in its most recent report on Lebanon. “The ongoing political deadlock and the prospect of executive, legislative and security force leadership vacuums amplify this challenge.”

Underscoring US fears that Lebanon will descend into chaos, John Kerry stopped by Beirut unannounced in June 2014 — the first secretary of state in five years to do so. Kerry pledged US support for the country, calling Lebanon “very important to the security of the region and beyond.”

Earlier this year, the State Department canceled a program that aimed to develop an “independent moderate Shiite voice” as an alternative to Hezbollah. Critics accused the Obama administration of caving to Iran in hopes of reaching a nuclear agreement, while the State Department insists the program was simply ineffective.

Further complicating matters, the United States has no good way to track its programs in Lebanon. The State Department had planned to evaluate its security assistance there, but the effort was formally stopped at the end of November 2014.

“The evaluation in Lebanon was canceled because the security environment … would have prevented adequate data collection,” a State Department official told Al-Monitor. “Given the uncertainty on when the situation would stabilize, the department was required to terminate the contract.”

The Government Accountability Office had recommended the evaluation of programs in Lebanon back in 2013.

“Without such evaluations,” the government watchdog wrote at the time, “State and [the Defense Department] have little objective evidence to show that the programs have been effective or what the proper mix of programs should be.”

While the Lebanese government itself doesn’t lobby for US help, both the country’s central bank and its private institutions have hired lobbyists to protect the country’s crucial financial sector.

The Lebanese Central Bank – aka Banque du Liban – hired US lobbying powerhouse Squire Patton Boggs in 2012 to “assist the foreign principal on the promotion of the image of Lebanese banking before the US Congress and administration.” The contract was terminated in April 2014.

The move followed accusations that one of the country’s banks, MEAB, has supported Hezbollah.

Private banks have also joined the fight to salvage their reputations — and profits.

The Association of Banks in Lebanon (ABL), a trade group, paid DLA Piper $190,000 in the first three months of this year to lobby on “international banking issues.” DLA Piper’s top lobbyist on the account is former Rep. Mike Castle, R-Del., who once sat on the House Financial Services Committee.

And MEAB has hired the BGR Group and Squire Patton Boggs to lobby the State Department and Congress, respectively. Neither firm reported any lobbying on behalf of the bank in the first three months of this year.

The lobbying campaign has succeeded in getting lawmakers to strip potentially harmful references to Lebanon from their Hezbollah sanctions legislation last year. The House easily passed the stripped-down bill in May.