While the news headlines scream of sectarian violence, many everyday Iraqis tell a different story of cohesion and solidarity in cities where the displaced have gathered. 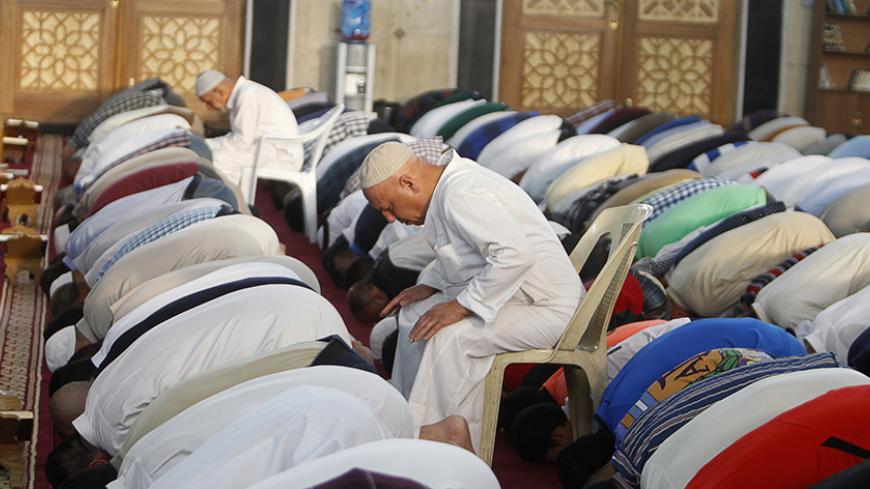 Sunni worshipers attend prayers during Eid al-Fitr as they mark the end of the fasting month of Ramadan, at a Sunni mosque in Baghdad, July 28, 2014. - REUTERS/Ahmed Saad

BABIL, Iraq — For displaced Iraqi citizen Saad al-Jabouri, this year’s Ramadan has been a good one. He left Kirkuk with his family of four on July 20, 2014. They were generously welcomed in the city of Hillah, in the center of Babil province, south of Baghdad, where the residents provided them with a free iftar after a long day of fasting.

Jabouri told Al-Monitor that the food he received was more than he needed, noting, “Many displaced who moved from north and west Iraq to Babil feel the same.”

The UN delegation in Iraq announced June 23 that the number of displaced people in Iraq, largely from northern and western regions, had reached over 3 million people distributed among all provinces, as a result of the Islamic State (IS) invading vast areas in Iraq since June 2014.

Al-Monitor attended free iftars prepared for the poor in mosques in the holy city of Najaf. During one of these ceremonies, Ali al-Khalsi, a displaced Shiite from Diyala province, told Al-Monitor he “asked the local government to grant [him] permanent residency in Najaf because of the great treatment and hospitality expressed by the city’s residents.”

Al-Monitor noticed cooperation between different sects during a visit to the holy mosques in Karbala, south of Baghdad, where food was distributed to both the displaced and the city’s original residents alike. Said Hassan, a displaced Sunni from Salahuddin province, told Al-Monitor that he is considering “officially settling in the city of Karbala,” saying, “I even got a job as a taxi driver, which I was never able to do in my hometown.”

Karbala journalist Alaa Koli, who writes for several Iraqi media outlets, criticized certain media organizations without naming them, telling Al-Monitor that they “report news about political conflict with sectarian dimensions, and never convey the news on cooperation and solidarity between people from different sects.” He added, “During Ramadan, people provide large-scale help for the poor and the less fortunate," noting that talk of war and sectarianism is overshadowing Iraqi attitudes of humanitarianism and coexistence.

Babil cleric Abdul Aziz al-Yasiri invited Al-Monitor to visit the shrine of Imam al-Hamza, where an iftar was held with the support of well-off residents and the religious authority.

“Although the majority of this region’s residents are Shiites, as well as the majority of the displaced, there are around 10 Sunni families who were displaced from Anbar in March 2014. They found the same amount of help and support as the Shiite families,” he noted.

Sayf al-Din al-Obeidi, a Sunni from Fallujah who lives with around 50 Sunni and Shiite families in the vacant al-Yamamah elementary school, told Al-Monitor, “In reality, the situation is very different from what media outlets interested in political spats report.” He added, “You will not find sectarianism here. Sectarianism is found among political elites and armed factions, especially those who came from outside of Iraq, most notably IS.”

Obeidi, who studied sociology at the University of Baghdad and worked as a teacher for two decades, said, “Sectarianism is weak or nonexistent among social classes, but it’s deep-rooted among divided politicians and parties.”

He said, “The month of Ramadan was able to show the cohesion of sects and … their children, while most of the media continue to convey division along sectarian lines.”

Sheikh Majed al-Kelabi of Babil told Al-Monitor, “Social solidarity and helping the poor during the month of Ramadan, in particular, are traditions that have been practiced by the residents of these areas for decades.”

In a similar example of solidarity among different sects, when Ali al-Sharifi finished reading the Quran after the iftar at al-Zahraa mosque in Hillah, he pointed out three of his Sabian friends who are original residents of the city, and called them “a true example of brotherhood among sects.”

One of these Sabians, Adel Daoud, told Al-Monitor he fasts during Ramadan along with Muslims and joins their religious rituals. He said he believes it is a duty imposed by their coexistence in one country, adding, “Iraqis never knew sectarianism and lived for hundreds of years as the children of one nation.”

While wandering around central and southern Iraq, one will notice how all Iraqis fear that the dangers of sectarianism will come knocking on their doors. Perhaps the hospitality expressed by the residents of these cities toward dozens of displaced families from different sects grows out of this concern. It seems that the month of Ramadan has strengthened humanitarian ties among different sects in Iraq and reinforced their ability to cooperate to overcome times of crisis.