Negotiators may ‘stop the clock’ to finish Iran deal

While the July 7 deadline for the Iran nuclear talks may not be met, officials still hope to have a deal by July 9 in order to avoid giving the US Congress a 60-day window to review the deal instead of a 30-day one. 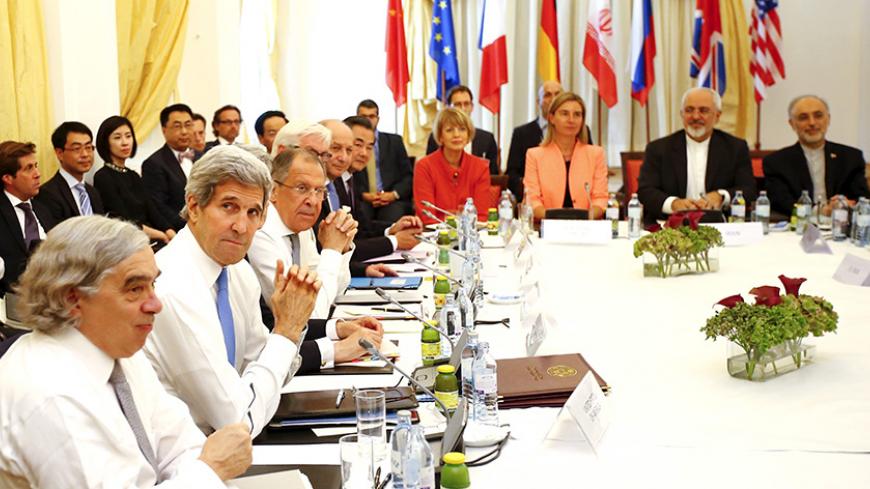 VIENNA — Negotiators from Iran and six world powers may “stop the clock” for a day or two if they run up against a self-imposed July 7 deadline to conclude a final Iran nuclear deal, as diplomats said they had made significant progress here on the text and annexes of the accord, even while they still had important differences to overcome.

“We have made good progress on almost all of the issues,” a senior Iranian negotiator said July 6. “But there are a few issues which … remain to be resolved. Probably those issues need to be resolved at the ministerial level.”

“They are tough issues,” the Iranian official, speaking not for attribution, told foreign journalists in Vienna on July 6. “Hard decisions have to be made at the end of the day,” he added, echoing US Secretary of State John Kerry’s comments on the talks the day before.

But negotiators made clear they hope to conclude the accord the next few days in Vienna versus going home and coming back again, at the risk of losing momentum and having to renegotiate issues they thought were already solved, as has happened in some past negotiating rounds. They also acknowledge that they prefer to finish the deal if at all possible by July 9, which is now considered the drop-dead date by which the US administration would need to have the deal in hand in order to submit it to Congress by a July 10 deadline, after which Congress would get 60 days versus 30 days to review it.

“For the time being, we even do not think about a possible extension,” the Iranian negotiator said. “An extension is in no one’s interest.”

“If we need to stay some more days in Vienna, it much better to spend more time here than go home and come back and start anew,” he added.

Foreign ministers from Russia, China, France, Germany and the UK and the European Union foreign policy chief rejoined Kerry and Iranian Foreign Minister Mohammad Javad Zarif here in the past day, and were meeting late into the night in plenary session in Vienna on July 6.

The arms embargo issue “is one of the important issues we are discussing,” the Iranian official said. “Our position is that the arms embargo should not be part of the JCPOA [the Joint Comprehensive Plan of Action],” the formal name of the prospective final Iran nuclear deal.

Iran was being careful not to box itself in on this issue, and would probably let Russia for now take the lead to try to find a way out of the arms embargo over time, separate from the nuclear deal, an Iranian foreign policy analyst at the talks said.

“At this stage, Iran has no interest in making … a demand that would expose it to the blame game very easily at this sensitive stage,” the Iranian analyst, speaking not for attribution to discuss sensitive negotiating positions, told Al-Monitor on July 6. “Rather, by arguing that the arms embargo is not related to the nuclear negotiations, it seeks to make essentially this issue a matter of contention between Russia and the US, instead of between Iran and the P5+1.”

“How [the issue] will be resolved in terms of issuing a new resolution I imagine is still under discussion and is a point of contention,” the analyst added, noting that Iranian President Hassan Rouhani was scheduled to meet with Russian President Vladimir Putin in Russia on July 8, around the time a final deal was expected to possibly be announced.

Zarif met with Russian Foreign Minister Sergey Lavrov in Vienna on July 6, presumably to discuss this and other issues.

A former Russian diplomat said he did not expect Russia to demand an immediate removal of the arms embargo on Iran, but would instead likely press for a sideline understanding with the US and other powers to revisit the issue on a step-by-step basis over time.

“I still believe in the ‘magic’ Russian step-by-step formula, which played well so many times during the talks,” the former Russian diplomat, speaking not for attribution, told Al-Monitor July 6. “Which means this can be addressed a bit later in light of the changing political-military situation in the region.”

“I would imagine a temporary fix in the form of an understanding on the sidelines that the parties … would continue to address the restrictions, [which are] not directly related to non-proliferation concerns, with the view to gradually removing them in the future while working to improve the overall situation and climate of confidence in the region and (maybe) in the light of progress achieved in the fight against extremist militants,” the former Russian diplomat said.