Hamas officials describe a new Amnesty International report on the group's execution of alleged collaborators with Israel as unprofessional. 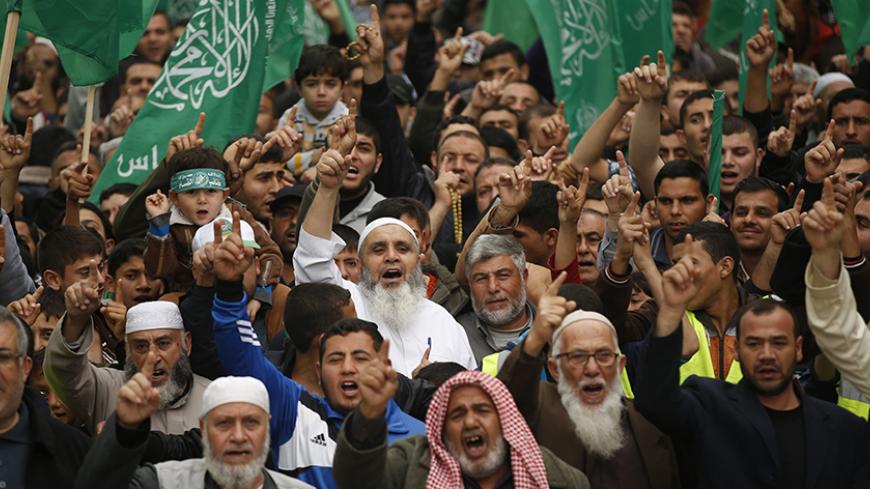 Palestinian Hamas supporters chant slogans as they take part in a rally ahead of the 27th anniversary of the movement's founding, in Jabaliya in the northern Gaza Strip, Dec. 12, 2014. - REUTERS/Mohammed Salem

Since Israel’s summer 2014 war on the Gaza Strip, Hamas has relied on human rights reports to buttress its accusation that the Israeli army committed war crimes against Palestinians. Most important is a report from Breaking the Silence titled, “This Is How We Fought In Gaza.”

But on May 27, Amnesty International published an article on its website stating that “Hamas forces carried out a brutal campaign of abductions, torture and unlawful killings against Palestinians accused of ‘collaborating’ with Israel during Israel’s military offensive against Gaza in July and August 2014.”

Based on Al-Monitor interviews with Hamas leaders who spoke on a condition of anonymity, Hamas was shocked by the Amnesty International report since it seemed to equate Hamas with Israel, which committed war crimes, as Amnesty International wrote in a December 2014 report titled, “'Nothing is immune': Israel’s destruction of landmark buildings in Gaza."

The latest Amnesty report has caused an uproar within Hamas, particularly at the legal and diplomatic levels, given the report's wide dissemination and Amnesty's international credibility. Some believe the report could be a precursor to Hamas' conviction in an international court — at least, this is what Hamas fears, as confirmed in a May 27 interview with Ahmed Youssef, former political adviser to Ismail Haniyeh.

The report states that “Hamas forces” in Gaza killed 23 Palestinians accused of collaborating with Israeli intelligence in its July-August 2014 “Strangling Necks” operation amid the outbreak of Israel's war on Gaza.

Hamas quickly responded to the Amnesty International report. On May 27, the group issued a statement rejecting the report, describing it as politicized, unprofessional and based on false allegations. The statement called the report's professional standards into question and said that Hamas was not responsible for the alleged killings during the 2014 Gaza war.

Omar al-Bursh, undersecretary at the Ministry of Justice in Gaza, demanded that Amnesty International “carry out accurate and objective inquiries and not accuse any party without a legal document." He added, "In the case of any suspicion of irregularities, special committees will be formed to deal with the irregularities, and findings and recommendations will be reached accordingly.”

For Hamas, the Amnesty report is dangerous, as it equates the Palestinians with the Israelis, the executioner with the victim, the killer with the killed. The report considers the Israeli army's war on Gaza just as hideous and harsh as Hamas’ actions afterward against those who collaborated with Israel.

Some Hamas sources did not totally support the executions of collaborators at the time, thus provoking internal debate in Hamas as to how executions should be carried out. The executions were carried out before TV cameras in broad daylight, in front of thousands of Palestinians, and they coincided with the Islamic State's (IS) executions in Syria — a strategy that anonymous Hamas leaders vehemently rejected. This has provided Israel an opportunity to equate Hamas with IS before the world.

Al-Monitor learned in its discussions with Hamas leaders of the concern that Israel will exploit the report and use it as a legal document to bring Hamas to the International Criminal Court (ICC), whereby Hamas leaders could become "war criminals."

Salah Bardawil, a senior Hamas leader and member of parliament, told Al-Monitor, “Hamas does not fear the ICC, even though the Amnesty International report was submitted as a card to convict it in the judicial forums. It is ready for all odds, because it is a resistant movement that defends its people in the various ways and means guaranteed by international law. Its doors are open to any party willing to know the truth behind what happened during the 2014 Gaza war.”

Hamas has attempted to promote an atmosphere of confidence following the publication of the report, though this may contradict what Al-Monitor was told privately. Hamas legal sources told Al-Monitor on condition of anonymity that Hamas “will be reviewing the entire original copy of the Amnesty International report, to be prepared to face its content, because it may be a thorn in the side of the Palestinian position heading to the ICC. This requires that Hamas takes practical steps to avoid the expected damage by the report.”

The sources added that Hamas is leaning toward forming a "professional committee consisting of human rights organizations representatives to discuss and carefully examine what the report noted, to prepare the entire files of those who were executed during the recent Gaza war, especially those suspected of collaboration with the Israeli intelligence, to prepare for a response, and to face the report in international forums.”

Remarkably, the Palestinian Authority (PA) did not issue an official position in response to the report. Al-Monitor tried to communicate with a number of officials in the justice and foreign affairs ministries, but none responded.

The PA condemned the execution of collaborators during the Gaza war, with President Mahmoud Abbas describing such executions as criminal acts.

Hamas is well aware that any international inquiry into the Amnesty report would require a considerable amount of time, meaning that the possibility of issuing indictments against Hamas leaders would not be an easy task. Furthermore, issuing indictments requires confidential documents confirming the direct responsibility for those executions, which are not available in the report.

In Hamas' eyes, the report is dangerous, as it further marginalizes Hamas from the international community. Meanwhile, Hamas has made unremitting efforts to prove that it has no ties to the organizations internationally labeled as terrorists, such as IS, Jabhat al-Nusra and al-Qaeda. This requires Hamas’ legal and political staff to be as active as a beehive to refute the report's allegations and to prove that the group is indeed an armed resistance against the Israeli occupation and does not commit war crimes.