A small surfer community south of Beirut, Lebanon, not only has dreams of seeing Lebanon represented in international competition, but is also interested in preserving the environment. 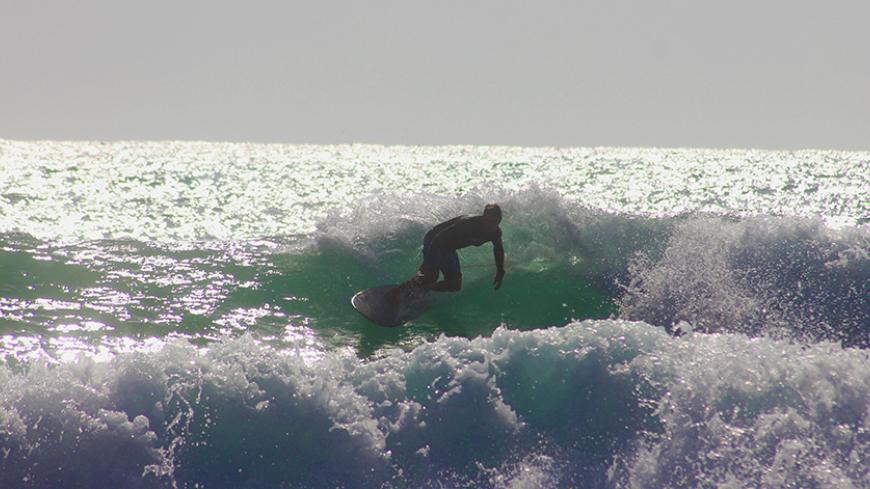 JIYEH, Lebanon — Along the Mediterranean coastline south of Beirut, in the small farming village of Jiyeh, a group of surfers are taking a break from a life that in their country tends to revolve around politics tied to religion and a region at war.

Ali Elamin, 31, founder and owner of the surfing school Surf Lebanon, is a Lebanese-American who mostly grew up in California. In 2011, he returned to the place of his Middle Eastern roots and a year later jump-started the surfing community.

“It was always something I wanted to do,” Elamin told Al-Monitor. “We have a really decent coastline that almost no one takes advantage of, and we get awesome waves.” Elamin was not, however, the first person to surf Lebanon’s beaches.

Mustafa el-Hajj, 30, was riding the waves back in the 1980s. “I started surfing when I was about 16 years old. I was alone, with my cousin. It was hard for us to get stuff for surfing, like boards and fins. We’d stop people and say, ‘Hey, stop. Come surf with us.’ There would be five or 10 people, but the sport wasn't improving,” said Hajj. It wasn’t until around September 2012, when Elamin came along to open his surfing school, that it grew locally in popularity. Enthusiasts and novices were then better able to learn the sport and improve their skills.

Hajj said, “We started working together to promote the sport.” As a result, according to Hajj, the community has grown to about 100, some 40 of whom Elamin calls “hardcore.” They are at the shore whenever the waves come in.

It has not been easy convincing the community that surfing is a sport to be enjoyed year-round. Elamin said, “It’s a new sport. It’s not part of the culture to go to the beach here in the winter. People think of it as a summer sport.” Once he and Hajj were able to get people into the water, however, they caught it “like a bug,” Elamin said. They were hooked.

Elamin is Lebanon's representative to the International Surfing Association. Although he admits he is not yet ready to send anyone from his school to compete internationally, Elamin hopes that the young Lebanese surfers will someday represent the country. “I don’t want to send someone who can barely make it past round one. It’s the next generation, in the next 10 years,” he said.

Surfing in Lebanon is more than a matter of skill and sport. Surfing offers a place to belong and a place to forget. “In the water, there is no religion. Everyone [here] knows that,” Elamin said. “We’re a family. In the water, if someone gets hurt, we all back them up. We cheer if someone snags a good [wave].”

Hajj agreed, saying, “People talk about what’s happening in Syria, that maybe there’ll be war in Lebanon, but when you come here, you forget all these things. You forget everything.”

The surfers foster a sense of unity and equality when they are together. Tarek Halabi, 19, comes from a Sunni Muslim background, while Husain el-Hajj, 18, hails from a Shiite Muslim family. When together, they are interested in connecting over how to ride the waves, their differences not an issue.

Halabi told Al-Monitor, “I mean he’s religious, and I’m not. But it’s not like that draws a line. It’s all right.” Hajj chimed in, saying, “They don’t care. None of us care.” Gesturing toward the beach, he explained, “Everyone, people right now in the water, we’re all friends here.”

In addition to surfing, the Surf Lebanon community also tries to promote small conservation efforts along the coast. Environmental programs in Lebanon are few and far between, but Elamin encourages his surfers to care for the space they use. “Lebanon struggles in this respect,” he said. “I have the guys here, if they drop a piece of trash, I tell them to pick it up. This is our home. Why not keep it clean?”

Most of Firas Assi's family is from Senegal, but he grew up in the Ivory Coast. Now living in Lebanon, he has become part of a community he is passionate about while also promoting a clean environment. “As a surfer, I have to pass this sand, and when you see trash, how, as a surfer, can you accept this? You need to help your community. We are all surfing here. We should keep it clean,” said Assi.

He believes that keeping the sand and ocean clean is about respect. Assi used to get upset with people leaving trash on the ground and even question them about it, but he then decided it was best to set an example by simply picking it up. He noted, “In Lebanon, there is no education, and no follow up on how to better the environment.” Like Elamin, Assi hopes he can make a small difference by taking care of the beach he comes to every day.

These surfers are more than just enthusiasts of the sport. They are a close-knit group getting along in a region that might typically tear them apart because of their differences. They do not give in to outside political pressures, however, preferring instead to push each other to appreciate and take advantage of their natural surroundings.

The little stone shack containing Surf Lebanon’s boards and equipment is a humble spot on the beach. It sits past the marina and off the main road in the center of Jiyeh, after a mosque and a dirt path on a private farm. The shack is spray-painted with Mustafa el-Hajj’s name and a greeting: “Welcome to Mustafa’s surf spot. Fasten your seatbelts and enjoy the ride.”

Hajj is proud of the community he has helped found and always welcomes newcomers. “Here in Lebanon, you know if people are Sunni, Shiite or Christian by their family name, you understand? But here, enough. ‘Are you a surfer?’ This is the first question we ask him,” he said.

Elamin does not know if he is necessarily promoting peace, but he does believe that when people come to the beach, that is what they’re looking for. He remarked, “I think everyone who comes here doesn’t need promotion. They all want peace. They’re all escaping. I’m just giving them a different view.”

Elamin thinks that perhaps with one step at a time, they can change the world, bringing people together to make waves their religion instead of divisive politics.