The statue of Portugal's Our Lady Fatima will visit several regions in Lebanon in a convoy of Christian leaders, many of whom believe that the tour will help Lebanon elect a president. 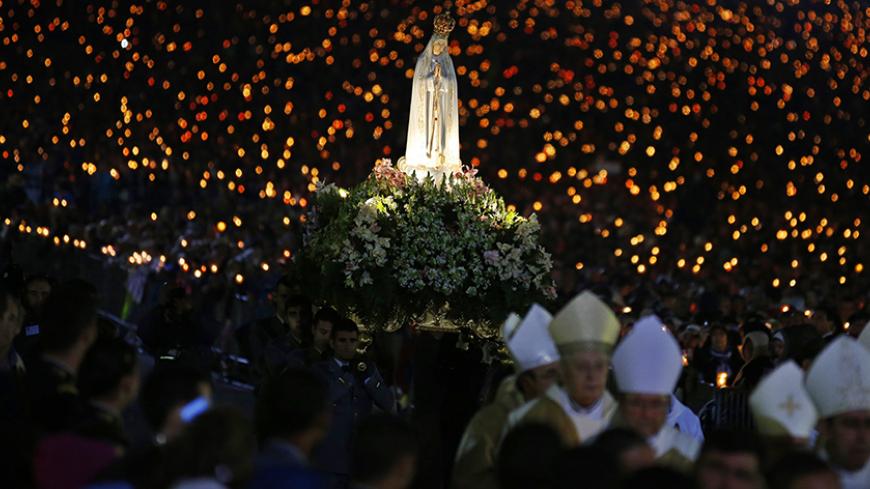 A statue of the Virgin Mary of Fatima is carried during a candlelight vigil at the Fatima shrine in central Portugal, May 12, 2014. - REUTERS/Rafael Marchante

FATIMA, Portugal — Christians in Lebanon seem to have lost hope in politics and politicians and decided to resort to religion for solace, as the Catholic churches in Lebanon have taken steps to consecrate their country to the "immaculate heart of Our Lady Fatima."

The statue will be brought all the way from Portugal to roam the regions of Lebanon and visit four Catholic patriarchates amid various political and religious expectations.

Al-Monitor accompanied the church convoy, which traveled from Beirut to Lisbon, the capital of Portugal, on June 10 to receive the statue and take it to Beirut for a five-day tour in the country, June 12-16. The convoy consisted of Syriac Catholic Bishop Antoine Beylouni as head and the secretary-general of the Council of Catholic Patriarchs and Bishops in the East, Father Khalil Alwan, as well as other clerics and officials.

The convoy members asserted to Al-Monitor the national character of this step, noting that the Lebanese government decided in February 2010 to declare the Annunciation an official holiday for Christians and Muslims alike, as an entire surah and several verses of the Quran are dedicated to the Virgin Mary.

Although most of the convoy members do not consider the visit a move of desperation, forsaking politics and resorting to religion for salvation from the current crisis, Beylouni and Alwan, among other participating clerics, wouldn’t stop talking about the significance of seeking help from "Our Lady Fatima" specifically, rather than other famous Virgin Mary shrines across the world. They explained in detail the historical meaning of this shrine.

They said that the first appearance of the Virgin Mary in Fatima happened in 1917 during World War I, and they described how she had predicted to three children the situation in communist Russia at the time and how the consecration of Russia for the Virgin Mary would re-ingrain Christianity in the country.

The political dimensions and significance of the statue's purported capacities do not end there. The leaders of the Lebanese church convoy shared their belief that Portugal’s 1938 consecration of "Lady Fatima" protected the country from the tragedies of World War II, and how Lady Fatima saved late Pope John Paul II from death when Mehmet Ali Agca attempted to assassinate him on her commemoration day on May 13, 1981. John Paul II himself reiterated this belief several times.

The convoy also narrated how the pope decided to devote Russia and the world to Lady Fatima in March 1984. According to them, this is what paved the way for the fall of communism in Moscow a few years later.

A Syrian delegation member who declined to reveal his identity told Al-Monitor, “Less than two years ago, when the nuclear weapon crisis broke out in Syria and the world thought that we were on the verge of a third world war, it was Pope Francis’ step that prevented slipping into that abyss.” According to the church official, Pope Francis publicly asked for a day of prayer to be dedicated to the Virgin Mary to end the war and violence in Syria.

Alwan told Al-Monitor that the request to move the statue to Lebanon was submitted by four Catholic patriarchates in Lebanon: Maronites, Roman Catholics, Syriac Catholics and Armenian Catholics.

Father Salim Readi and Brother Emmanuel, members of the convoy who actively participated in organizing the event, revealed to Al-Monitor the national concerns that prompted the visit. They believe that the presence of the statue in Lebanon and the consecration of the country to her will soon resolve the stalemate in Lebanon.

It might even lead to the election of a president. The convoy members said that the scheduled tour was initially prepared for this purpose. Even the organizers tried to include a stop for the statue at the empty presidential palace, but the government officials would not allow it. The organizers shifted their vision to another presidential objective and decided to place the statue in front of the Lebanese parliament on June 14 to bless it, so that the parliamentarians would elect a new president quickly.

Another member of the convoy said more realistically, “In the end, Christians in Lebanon and the region have undergone tough times and might face scarier and more dangerous phases. In such cases, faith is helpful. Our Lady of Fatima might not have miraculous solutions, but it is enough for Christians and the Lebanese people to feel that she protects them. This will grant them the ability to be stronger in facing the crises or at least in bearing them, until better circumstances or more efficient solutions arise.”