The ultra-Orthodox sector is rallying thousands of consumers in its battle against businesses that operate on Saturdays. 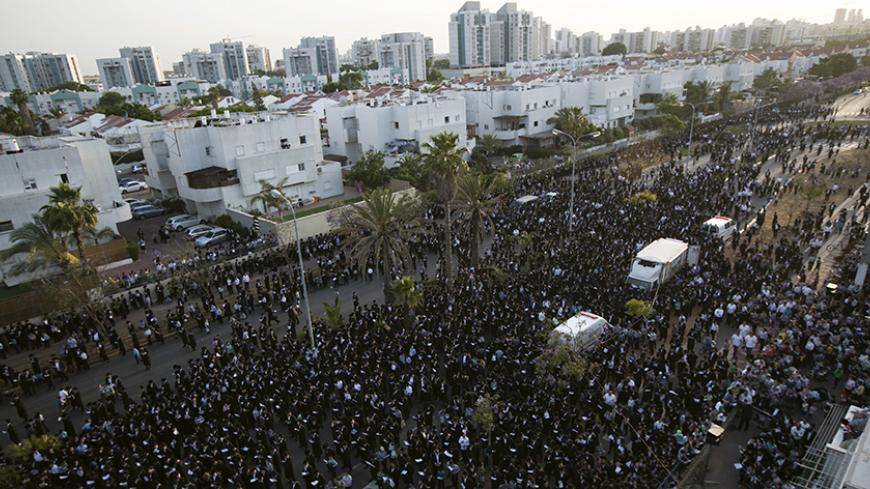 Ultra-Orthodox Jews take part in a demonstration that attracted about 10,000 protesters against a shopping center that opens on Saturdays, in the southern city of Ashdod, May 18, 2015. - REUTERS/Amir Cohen

Soon enough, Weissman was sustaining huge losses, and branches of the Shefa Shuk supermarket chain started closing one after the other. He then reopened the chain under a new name — Zol BeShefa — but the ultra-Orthodox community steered clear of these stores, too. Thus, after years of major losses, while insisting on keeping the chain and refusing to cave to ultra-Orthodox pressure, Weissman gave up and sold the chain.

This story is indicative of the potential of the targeted and efficient use of consumer purchasing power — in this case, the purchasing power of ultra-Orthodox consumers. At the same time, it illustrates the tenacious struggle waged by the ultra-Orthodox community for several decades now over the image of the Jewish state, as the community perceives it — a struggle over the operation of public transportation and shopping centers on the Sabbath.

Today, a similar struggle is taking place over the Big shopping center in the southern Israeli city of Ashdod. In a rally at the end of April and in another demonstration May 18, the local rabbinical committee threatened to boycott the entire chain of Big shopping centers and to impose "economic sanctions" on it by exerting pressure on insurance companies and equity funds to withdraw their investments from the Big group, in Israel and worldwide.

"The ultra-Orthodox have shown that they have patience and discipline — more than the investors, who are interested in increasing their profits and do not care about ideology. When it comes to money versus ideology, ideology always trumps money," Haim Fishman, an ultra-Orthodox shop owner from Ashdod who identifies with the struggle, told Al-Monitor. "We are not threatening to physically harm any stores that open on the Sabbath, but we have the right not to buy from those who hurt our feelings. What we have been doing in recent years reflects the transfer of power from the businessmen to the public at large. If anyone wants to learn how to do it right, well, he should watch us."

Attorney Avi Edri, who represents the rabbinal committee campaigning against the Big chain, sent a warning letter a few days ago to 40 companies and to some of the largest equity funds in Israel that have invested in the group. However, Edri said that the fight has not yet started. "At this point, the rabbis are in dialogue with the chain owners. If and when the talks reach a dead end, the rabbis will gather to examine future options," he said.

For legal reasons, the activists campaigning against the Big group focus on publicizing the names of bodies and companies that are partners in the group, assuming that the ultra-Orthodox public will know what to do with this information. "For the time being, there is no organized boycott, and we will ban any illegal actions," Edri said. "Still, in conformity with freedom of information regulations, we are acting to make known the names of companies that invest in the Big group and take part in the desecration of the Sabbath. The [ultra-Orthodox] public will then turn to its rabbis for guidance on its relations with those companies."

Be that as it may, some in the Big shopping center in Ashdod are not ready to give in. Irena Rezobayev, a local shoe store manager, told Al-Monitor that the ultra-Orthodox boycott does not frighten her. "Anyway, they are rarely seen around here. Only a few ultra-Orthodox shoppers used to drop in on Saturday night [after the end of the Sabbath at sunset], and those regulars keep coming. I don't see a decrease in the number of customers."

Rezobayev is deeply worried about the possibility that she will have to close the store on the Sabbath, however. "Saturday is the most profitable day of sales in the week. If I'm forced to close up, I'll have no choice but to lay off some of the sales staff whose salaries are based on Saturday revenues. On Saturday, we employ students as well," she said. "I cannot understand why it should bother the ultra-Orthodox. Let each and every one of us follow his faith. The way I see it, undermining the livelihood of others is the most un-Jewish thing you could think of."

Rima Kertsman, who works in Rezobayev's store, looked very upset. "This shopping center is not located in an ultra-Orthodox neighborhood; in fact, it is way out of town," she said. "I myself keep the Jewish tradition, and even people who keep the tradition and work hard all week would like to go out on Saturday and do some shopping. With all due respect — and I do have respect — religious people who would rather stay at home on Saturday can do so, but they should not impose their way of life on anyone else."

The Big group does not consider these boycott threats to be serious. It claims that it would have supported the closure of the shopping center chain on Saturdays, provided that all businesses in the region would have done the same. If this closure is ''applied across the board, there won't be any sense of double standards,” the Big group CEO's spokesman told Al-Monitor, hinting that people within the rabbinical committee — ''the organizers'' of the campaign, as the group refers to them — discriminate against the shopping center. The spokesman added, "It is surprising that other commercial centers freely operate on Saturdays, and that for years, no one has protested against this.'' He said that as long as the organizers try to impose selective closures, their outcry will see no results.

Based on past precedents, the activists campaigning to close the shopping center in Ashdod on the Sabbath are confident in their success. In the past few decades, the ultra-Orthodox have forced a large number of stores to close their doors on the Sabbath. At the same time, the Karta parking lot near the Old City of Jerusalem, against which the ultra-Orthodox persistently demonstrated, has withstood the pressure and continues to operate on Saturdays.

The struggle over the Sabbath, in addition to its religious and social implications, is also over the demarcation of the boundaries of ultra-Orthodox turf. For years, the ultra-Orthodox turned a blind eye, as it were, to the shopping centers located on the outskirts of mixed religious-secular cities. Now it seems that the ultra-Orthodox seek to reformulate the status quo. The ultra-Orthodox community, whose numbers are steadily rising, seeks to take advantage of its size and increasingly influence the public domain.

But in the case of the Big shopping center in Ashdod, the impression is that it is not only the ultra-Orthodox who show determination. The owners who open their stores on Saturdays seem no less resolute.