Iraq’s commitment to provide security services to religious visitors is regarded by some as resources that ought to be used to fight terrorism instead. 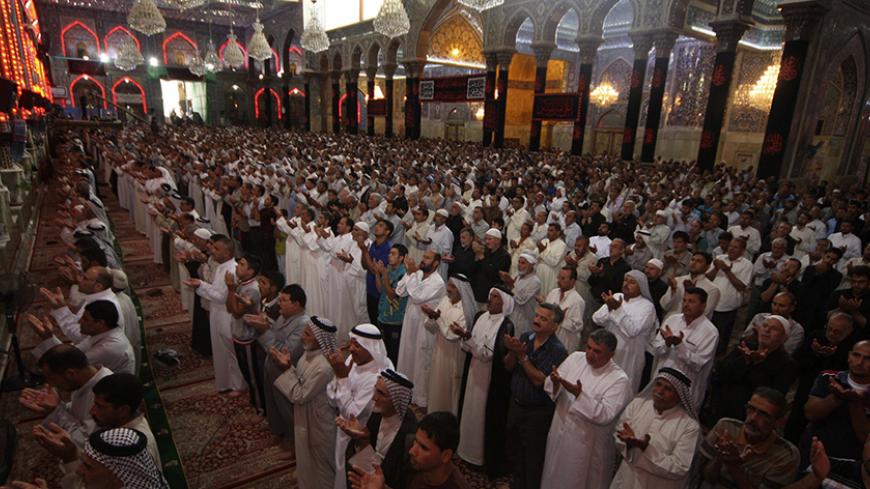 BAGHDAD — Over the last 10 years, traveling merchant Hussein Alwan and his seven-member family never missed celebrating any Shiite religious occasion. They visited Najaf, Karbala and Samarra several times, and on May 12 they made a daylong hike where they crossed the city of Baghdad from the south to the north to visit the shrine of Imam Musa bin Jaafar al-Kadhim, the seventh imam in Twelver Shiism.

In a telephone interview with Al-Monitor, Alwan said that these rituals have become part of him, and he feels proud to take part in them despite the security risks. His family’s convoy was targeted by an explosives-laden car May 12 in Saadoun Street, but this did not stop them from completing their journey to visit Imam Kadhim's tomb. Alwan said proudly, “We dare all extremists and Islamic State [IS] members to prevent us from taking part in these rituals.”

Millions of Shiites feel that they should accept any challenge or risk to practice their religious rituals and to prove their cultural and religious identity. The number of participants in these rituals has increased year after year in conjunction with the escalation of sectarian conflict in the country. The Shiite masses are prime targets for terrorist groups, and extraordinary security efforts are being constantly exerted by the Iraqi government to protect them.

Shiites celebrate the birthday and death of the 12 imams, as well as a number of other occasions. Some of these celebrations extend over more than 40 days, such as the commemoration of the death of the third imam, Hussein ibn Ali, as flocks of visitors pour into the city of Karbala from inside and outside Iraq. Visitors are mostly Iraqi, but Shiites from Iran, Bahrain, Lebanon and Pakistan, among others, visit Karbala, too.

Shiites of all ages travel hundreds of miles by foot to visit the tombs, as they believe that walking long distances is a show of respect to the high status of the imams.

Massive security efforts on the part of the state are required to protect these processions. With every religious occasion, the security services in the country's central and southern provinces are on alert. Tens of thousands of security agents secure roads and entrances and exits, military vehicles are deployed at intersections and operating rooms conduct continuous intelligence activities. Sometimes the air force takes part in monitoring the streets, while some provinces also receive military support from other provinces. For instance, in December, Maysan province sent two combat units to Karbala to protect visitors and Nasiriyah province sent two police units and an emergency team to Karbala for the same purpose.

The chief of the Baghdad Operations Command, Abdul-Amir al-Shammari, said in a press conference in Baghdad on May 9 that 75,000 security members were deployed to ensure the protection of visitors during their recent visit of Imam Kadhim's shrine.

Operations Chief of Rafidain, Lt. Gen. Mezher Shaher, discussed at a news conference held at the Wasit police headquarters on Nov. 26, 2014, the types of plans and preparations of the state security apparatus to protect the participants in any of these religious events.

These procedures included, according to Shaher, the deployment of tens of thousands of security personnel on the roads leading to the city of Karbala. Shaher said the procedures were the result of common efforts from the various types of police, military, national security and intelligence services. “There are operation rooms managing the movement of security forces on the ground. These rooms are linked to the High Security Commission in each province, which in turn coordinates with the Iraq Operations Command that coordinates the work among neighboring commands to ensure the protection of visitors,” he said.

The poor security situation and high costs necessitated by the protection of large crowds stirred in some circles concerns regarding the re-evaluation of this issue.

Ibrahim al-Hassani, an officer who participated in operations for the protection of visitors in the city of Baghdad before he retired in early 2015, told Al-Monitor over the phone that if the security and intelligence efforts allocated for the protection of these rituals focused instead on fighting IS in the provinces occupied by it, the outcome of the war on terrorism would have actually been positive. He said that the crowds participating in these rituals are easy targets for terrorist attacks.

Alwan has a different opinion. He told Al-Monitor that it is the government's duty to protect the crowds taking part in religious rituals. “Participating in these rituals is a [religious] duty and people must not give it up, no matter the circumstances,” he said.

Some of these events provide evidence to the significant paradoxes between the risk of the security situation and the obligation to protect the crowds. On July 11, 2014, one day after IS’ takeover of Mosul and Tikrit, the commander of the Baghdad Operations Command announced in a press conference the allocation of 22,000 security personnel to participate in the protection of one of these rituals known as the night of mid-Shaaban.

Hassani told Al-Monitor, “It is a major paradox. The country is under occupation while the state is mobilizing its troops in another direction.”

Hassani, a Shiite, does not object to the principle of practicing religious rituals. He said that he has been taking part in them since he was young, but he believes downsizing these religious ceremonies and easing the security burden on the state — allowing it to mobilize its efforts to fight terrorist organizations expanding inside the Iraqi territory — would be in the country's interest.

This debate has now become a matter of public opinion, but it does not seem that the Iraqi government is able to downsize religious celebrations by itself. This is not a political decision, but rather requires an understanding by the key religious institutions in the country, such as the Najaf authority, to persuade their followers to postpone the exercise of some of these rituals for a period of time, so as to allow the government to mobilize all of its security means toward the liberation of the Iraqi territories occupied by terrorist groups.