It has been four years since the Amazigh language was officially recognized by the Moroccan Constitution, but there is still no law in place to guarantee the cultural minority’s rights. 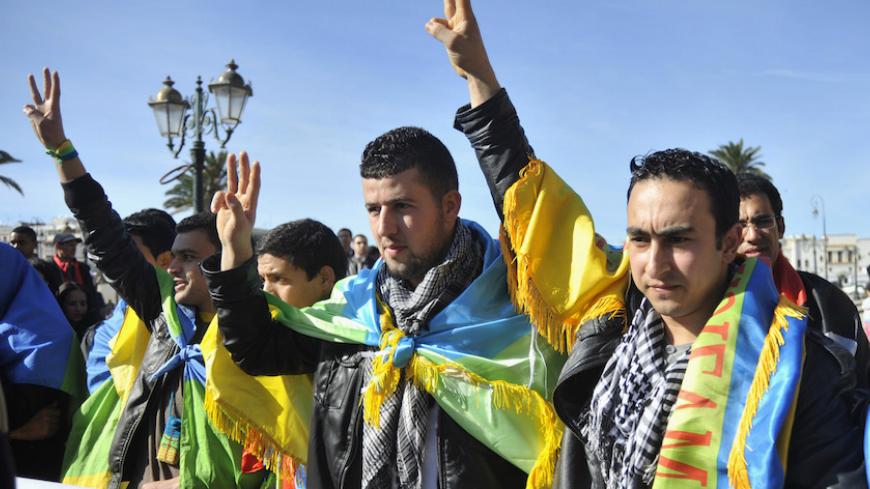 Moroccan Amazigh Berbers march during a protest calling for the release of political prisoners and demanding more rights, in Rabat, Feb. 3, 2013. - REUTERS

RABAT, Morocco — Almost four years have passed since the recognition of Amazigh as an official language in Morocco, making it a constitutional language alongside Arabic, in a first since the country’s independence in 1956.

The presence of the Amazigh is not limited to one region in Morocco, and people of Amazigh descent do not all necessarily speak the Amazigh language; some of them are Arabic speakers. There are regions populated with Amazighs entirely, though, or that have a high concentration of Amazigh speakers, such as Souss in southern Agadir, much of Morocco's countryside and the Middle Atlas mountain range.

It is noteworthy that Amazigh people consider themselves the original inhabitants of North Africa. They are believed to have been the first people to live in Morocco before Islam arrived to the country.

The Amazigh experience in Morocco has often been marked by disappointment. The Amazighs were marginalized after Morocco’s independence. In 1991, the Amazigh movement announced a charter of demands calling for the respect of Amazigh cultural and language rights. Today, their situation still leaves a lot to be desired.

There are no official statistics about the number of Moroccan Amazighs or speakers of this language, especially since the 2014 census did not give details about this issue. Some unofficial figures, however, claim that Amazighs constitute 60% of the Moroccan population.

The advocates of Amazigh cultural and linguistic rights in Morocco do not seem satisfied with the path taken to activate the constitutional measures that were voted on in July 2011 within the framework of a large-scale amendment following the February 20 movement protests in 2011 — the Moroccan contingent of protests in the Middle East and North Africa region. One of the demands people had back then was the recognition of Amazigh as a constitutional language.

Although the constitutional recognition marked the most significant historic victory for the Amazigh movement since the early 1970s, the slow implementation of promises and the ongoing marginalization of some Amazigh people in Morocco have stirred concerns among Amazigh rights activists.

Rachid Raha, president of the Congres Mondial Amazigh, a nongovernmental organization founded in 2012 to safeguard Amazigh rights, seems almost certain that some parties are deliberately slacking in activating the official nature of the Amazigh language.

Raha blames the government for this, as it holds the authorized constitutional powers. He told Al-Monitor, “What happened in the past four years was against the constitutional methodology that states that the regulatory law for the Amazigh language should be a top priority among the laws to be drafted. The stalling also contradicted the king’s speeches in parliament, which called for expediting the official activation of the Amazigh language.”

Raha also believes that the Islamic Justice and Development Party, which leads the current government, has not proven that it has changed its previous racist stance vis-a-vis the Amazigh language. The party even opposed the adoption of Amazigh as an official language during the deliberations that accompanied the constitutional amendments between March and July of 2011.

Raha does not seem optimistic regarding the current situation of Amazigh, which he did not consider reassuring.

Justice and Development Party sources who spoke to Al-Monitor on condition of anonymity said the regulatory law drafted in 2011 under the supervision of the Ministry of Culture to establish a languages council was finally completed in April and has been presented to the royal court for approval. The same sources denied any underlying intention on the part of the government to delay or obstruct the adoption of Amazigh as a constitutional language.

The failure to pass laws is not the only thing worrying Amazigh citizens. Mohand, a young Amazigh man living in Rabat who preferred to withhold his last name, said that he believes the steps that have been taken merely aimed at appeasing the crowds. He thinks the true change needed to grant the Amazigh language its well-deserved worth must start with television, public administration and history books.

“We notice, for instance, that TV channels still broadcast news in Amazigh at the same rate as news in French. This gives the impression that Amazigh is a foreign language, just like French, Spanish and others. The media is trying to limit the Amazigh language to all that is folkloric, as though the Amazigh culture is just restricted to songs and dances. Private media gives no importance whatsoever to Amazigh listeners or spectators,” Mohand added.

When it comes to public administration, people who speak Amazigh are still marginalized, as all services are offered in Arabic and French. Mohand told Al-Monitor that Amazigh citizens who do not speak anything but their language can only hope to find people who understand and can serve them in courts, hospitals or municipal councils. Mohand also believes it is important to conduct a comprehensive review of Morocco’s official history.

“Moroccans should know that Morocco wouldn’t have achieved independence if it weren’t for sacrifices of men and women who died for their country rather than the educated elite under French auspices. They should also know the role that these elites played in fighting Amazighs and considering them enemies, while the latter fought for their country persistently,” he said.

IRCAM was established in 2002 as a national organization that aims to promote the Amazigh language and to contribute to the enactment of public policies that act to its benefit. In 2002, the Tifinagh alphabet — the alphabet used to write Berber languages and which was used by North African Amazighs long ago to write the different Amazigh languages — was approved for Amazigh writing by Mohammed following lobbying on the part of IRCAM’s administrative council.

In 2003, Morocco started teaching Amazigh at the primary education level, but the experience has not been generalized yet and still faces many difficulties, mainly the lack of qualified teachers who specialize in the Amazigh language.

A report issued by the Supreme Council for Education, Training and Scientific Research a few days ago called for a comprehensive assessment for teaching the Amazigh language in schools and at the higher education level.