While Iran's religious and nationalist groups have been at odds over various issues since the 1979 revolution, increasing tensions with Saudi Arabia and wide adoration for Quds Force Cmdr. Qasem Soleimani have largely united the two camps. 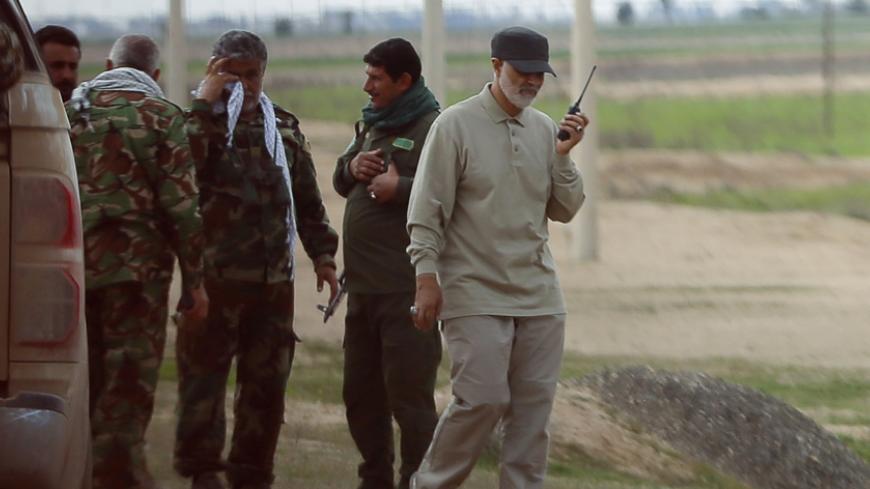 During the past few weeks, after the start of Saudi Arabia’s Operation Decisive Storm against the Houthi rebels in Yemen, a tense verbal battle broke out between the Iranian diplomats and generals and their Saudi counterparts. Each side accused the other of stirring unrest in the Middle East. This ongoing tension between Tehran and Riyadh has had undeniable effects on Iranian society, especially its middle class and more secular populace.

Now there are reports that two Iranian teenage boys on a pilgrimage tour to Saudi Arabia were assaulted by Saudi security guards. If previously only the very religious Iranians were hostile toward the Wahhabi rulers of Saudi Arabia, after this incident, the more secular and nationalist Iranians have also joined the anti-Saudi chorus in Iran, expressing their anger against the country.

This group of Iranians are expressing their anti-Saudi views over the social networks. In a rare event, a spontaneous and independent gathering — which was not organized in any form or shape by the government — formed in front of the Saudi Consulate in Mashhad and later the Saudi Embassy in Tehran. Protesting Iranians also tried to use the anti-Saudi mood call on their more religious countrymen to boycott the pilgrimage to Mecca, in both its mandatory and its optional forms, and instead use the money saved for the pilgrimage to improve less developed regions of their own country. This group also started a campaign called: “Supporting the Iranian Passport.”

The two groups carried different placards and chanted different slogans during their respective anti-Saudi gatherings. For instance, religious Iranians and Basij members chanted slogans in support of the Houthis of Yemen and carried the flag of Hezbollah. The secular protesters carried no flags and their slogans did not support the Iran-backed Shiite groups. In spite of these differences, the Iranians' mass anger toward Saudi Arabia has been one of the few cases where secular and religious Iranians agree with each other.

Saddar Mohaghegh, a journalist who lives in Tehran, told Al-Monitor, “A lot of secular Iranians who are not interested in religion are not happy about the strong presence of the Islamic culture in Iran. They used this opportunity and took part in this gathering because under normal circumstances, there are no opportunities for them to express themselves. In fact, they could have been accused of being anti-Islam, had they taken such actions under normal circumstances.”

Mojtaba Fathi, another journalist based in Tehran, spoke to Al-Monitor about the history of tension between Iran and Arab countries, saying, “Before the revolution, Iran, supported by the United States and other Western powers, had managed to become the dominant power of the region. This reality was hard to digest for the Arab countries in the region. After the 1979 revolution, Iran’s relations with the West became strained. In the meantime, Saudi Arabia managed to take over Iran’s position as the regional power by getting close to the United States and even Israel. Naturally, the Islamic Republic was not happy with this new development. Saudi Arabia’s support of Iran’s enemies, especially during the Iran-Iraq war, has helped intensify the hostility directed against Saudi Arabia. The Iranian officials have, from time to time, publicly protested the actions of the Saudi government and they have always been accompanied by those Iranians with anti-Arab tendencies.”

With the fall of the shah in 1979, the new Islamic government tried to promote Shiite/Islamic culture and sideline the pre-Islamic Iranian culture promoted by the Pahlavi dynasty. For instance, the Islamic Republic eliminated the veneration of Cyrus, the famous Iranian king, although he had lived more than 1,000 years before the advent of Islam. The actions of the new government and the tensions it created with the West resulted in a lot of urban Iranians thinking of the new government as alien and anti-Iranian and attempting to resist its actions.

During the first few years of Mohammad Khatami’s presidency, there was a temporary closeness between the more secular and modern layers of society and the religious government. Although Khatami was a cleric himself, a lot of his supporters believed that he could end the hostility between a large portion of society and the government. However, near the end of Khatami’s second term, disappointment had replaced hope, and the feeling was strengthened with President Mahmoud Ahmadinejad’s election.

Ahmadinejad’s policies isolated Iran even further and the regime’s brutal crackdown on protesters in 2009 fueled even more disappointment and divergence. Many Iranians were upset that their country had lost the status and the respect it once had in the international community, a clear sign of which was the decline in the status of the Iranian passport. By the time Ahmadinejad’s second term ended, Iran was under tough sanctions and very much isolated from the rest of the world. Iranians' dissatisfaction with their country's place in the world was one of the reasons President Hassan Rouhani’s campaign promise of reviving the credibility of the Iranian passport was so successful.

Secular Iranians want to see their country resume its role as a regional power and come out of its isolation. This is why, during the past few months, Quds Force leader Qasem Soleimani's popularity has soared and even the Iranian opposition media outlets that operate outside of Iran have included him in their Man of the Year candidate lists. Millions of young Iranian Facebook users find ways to bypass the nationwide filter to attack French Foreign Minister Laurent Fabius, who they believed was responsible for the collapse of the early stages of the negotiations, on his Facebook page.

Secular and nationalist Iranians have been active during the past few decades. But over the past year, because of the social networks, the emergence of a more legitimate administration and the regional conflicts involving Iran, the two groups have managed to become much more active.

The important issue to remember regarding these nationalist and secular Iranians is that just as their attacking Fabius’ Facebook page is not a sign of hostility toward the West, their gathering in front of the Saudi Embassy also does not indicate their hostility toward Arabs. They attacked Fabius because they so desperately want Iran to come out of its international isolation, and they gather in front of the embassy because they want to see their county regain its previous status in the region and the world. This is why as soon as the Jeddah incident happened, a popular movement took off and rapidly gained followers all over Iran, in small and big cities alike. And it is this nationalist attitude and the desire to grow in status in the region and the world that is making Soleimani so popular.