Human rights activist and lawyer Khalid Ali tells Al-Monitor that Egyptian President Abdel Fattah al-Sisi’s regime is bowing to the conditions of global financial institutions to shore up his own position. 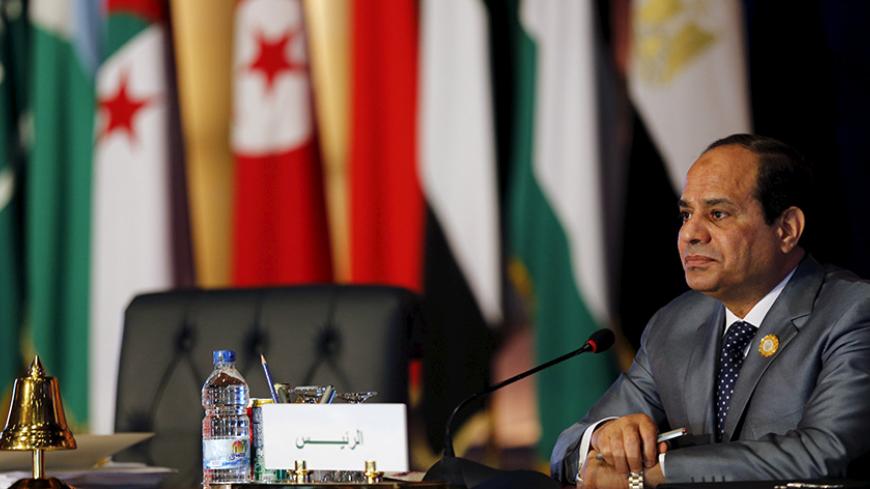 At 40, Khalid Ali was the youngest candidate for the 2012 Egyptian presidential elections. An Egyptian lawyer and human rights activist, he gained fame by defending protesters in court. Among them were Alaa Abdel Fattah and Ahmad Abdul Rahman and 23 others, all of them January 25 activists arrested on charges of violating the anti-protest law in the Shura Council case.

In 1999, he co-founded and served as the executive director of the Hisham Mubarak Law Center, which provides free legal aid for human rights issues. He now heads the new Life and Freedom Party. The main goals of the party are protecting the January 25 Revolution’s achievements, rejecting violence and terrorism and avoiding civil oppression and religious radicalism. It also struggles for a civil democratic state and seeks to protect the people’s interests.

In his interview with Al-Monitor, he said that in terms of economic policy, President Abdel Fattah al-Sisi’s regime is more “more savage” than President Hosni Mubarak’s, and that the Egyptian police forces do not differentiate between peaceful protesters and others. He added that Egypt will be further inflamed if Mubarak’s old tactics are used in the upcoming parliamentary elections.

Al-Monitor:  Do you think Sisi’s regime is following in the footsteps of Mubarak’s regime in economic policy?

Ali:  First, I want to say that Mubarak’s person fell, but his regime did not fall. We are now facing a new guard for the old regime. Sisi paved the way to follow Mubarak’s path, starting in the era of Adly Mansour, by immunizing administrative contracts from court appeals by the citizens and by amending the bids and tender law in a way that gave public bodies the opportunity to buy and sell without a bid or a tender. When Sisi became president, he followed in Mubarak’s footsteps regarding the austerity policy. He imposed more taxes, reduced subsidies and proposed privatizing state companies. So I see that Sisi’s economic policies are in fact even more savage.

Al-Monitor:  Why is Sisi following the same economic policies that led to Mubarak’s overthrow?

Ali:  Sisi is doing this to economically appease foreign powers because he wants to achieve a reconciliation with major financial institutions and the states that sponsor neoliberalism (the G-8 nations) by abiding by their economic conditions, to force these nations to deal with him and to enter into a partnership that promotes his position internally and externally. On the other hand, he also wants to appease the upper class, which controls the Egyptian economy, to boost his support among powerful allies in that class, which controls almost everything in Egypt.

Al-Monitor:  How will that impact the next stage?

Ali:  This will lead to growth rates that have no significant sustainable development in Egypt. The growth rates should be reflected on the Egyptian people by fairly distributing the proceeds of the projects. In Mubarak’s days, there was development, but the wealth was concentrated in the hands of a handful of businessmen and the ruling elite, while the majority didn’t have the simplest livelihood rights. So I ask you to come down and ask the simple citizen about his living conditions. You will feel tightness in the chest.

Al-Monitor:  Some personalities are unwelcome on Egyptian satellite channels. Do you see this as a new form of violating freedom of expression?

Ali:  The media that we have in Egypt is divided into two types: a state media, which has lists of guests that only talk about the positives. Those lists are determined by government figures that reject the appearance of opposition figures. The other type is the private media, which is owned by the economic elite, which agree with all of Sisi’s policies because they are in their interest. So I have stayed away from the media for the last two years because the polarization has become acute and shouting has become a feature of this phase. Even if I appear on TV, my voice will not reach anyone.

Ali:  The human rights situation in Egypt is extremely bad due to many factors, including the regional situation in Syria, Iraq, Libya and Yemen — I fear that this scenario will happen in Egypt — and also because of the bombings that happen from time to time. But what’s strange in the bombings is that some of them are not claimed by anyone, while we have gotten used to takfiri currents claiming responsibility for their bombings. So there is suspicion on who is behind the operations that are giving the government a pretext to talk all the time about security, protecting the pillars of the state and providing stability even at the expense of human rights. But the state cannot provide stability in this way. Restricting rights and freedoms means that there are new ones being violated. Those whose rights were violated may not participate in terrorist operations. But because of the injustice they have suffered, they will implicitly sympathize with what is happening. Perhaps the death of Shaimaa al-Sabbagh proved that the police force doesn’t differentiate between peaceful and non-peaceful protesters.

Al-Monitor:  Is the National Council for Human Rights performing the role assigned to it?

Ali:  The National Council for Human Rights is a state-affiliated council, not an independent one. Its members are chosen by the president of the republic, and the council’s budget comes from the state budget. So how can it play its role?

Al-Monitor:  Do you believe that June 30 was an extension of January 25?

Ali:  June 30 was one of the waves of January 25 despite the fact that many have used the massive crowds to their own ends and pushed for it. The main reason [for the June 30 demonstration] was the rage against the Muslim Brotherhood, which did not seize the historic opportunity to present a different model from Mubarak’s state. We were surprised to see [the Brotherhood] restoring Mubarak’s state. So millions of people descended [to the streets] and I was one of them. What happened [on June 30] is very different from what happened on July 3, when everybody saw that Sisi had the intention and the desire to take the reins of power in Egypt.

Al-Monitor:  Will the upcoming Egyptian parliamentary elections bring Egypt into safe harbor or will they further inflame the situation?

Ali:  If they happen properly, then Egypt will reach safe harbor. But if they happen under the same style of the old Mubarak school — whereby the state internally controls the results of the parliamentary elections but gives the outward appearance of democratic elections — then this will complicate the political scene. I think that the state doesn’t even have a vision of the election law. The current political vacuum is intentional by the Sisi-led Egyptian state. This is apparent from the continuous attacks on the political parties and the accusations that they are failing, instead of supporting them to establish a sound partisan life and provide the largest number of seats in parliament to the lists, so that citizens are encouraged to join the parties. I wonder what kind of parliamentary elections will take place in an environment where political life is devoid of young people and where they are suppressing student mobility inside the universities, something even the Brotherhood didn't do.

Ali:  I don’t think so. Millions of Egyptians have been pushed by circumstance to travel and work abroad. They obtained the citizenship of the countries where they reside. This does not mean that they are unpatriotic. There are ministers and governors that have dual citizenship, and they work in sensitive state positions. So why the double standard?

Al-Monitor:  To what extent will the conflicting positions of the Ministry of Education about not politicizing the curriculum affect the children’s feeling of belonging to the homeland?

Ali:  Reforming education means securing a better future for the country. This reform depends on the Ministry of Education being independent in developing the curriculum and protecting it from the existing polarization in society. Unfortunately, this has become the scourge of Egyptian education. Every ruler comes and distorts his predecessors’ record and promotes his own achievements and glories. Meanwhile, the state is dissolving student groups at universities such as the “al-Maydan family,” some of whose members belong to the liberal Constitution Party. Under the pretext of not politicizing education, we see the state imposing its political viewpoint on schoolchildren.

Al-Monitor:  Does the current stage require the continuation of the revolutionary course, or should it be stopped for fear of dividing the country and of the growing terrorism phenomenon?