Wireless networks from Turkey are spreading in opposition-controlled neighborhoods in Aleppo, with cheap prices compared with local Internet services that are regularly disrupted. 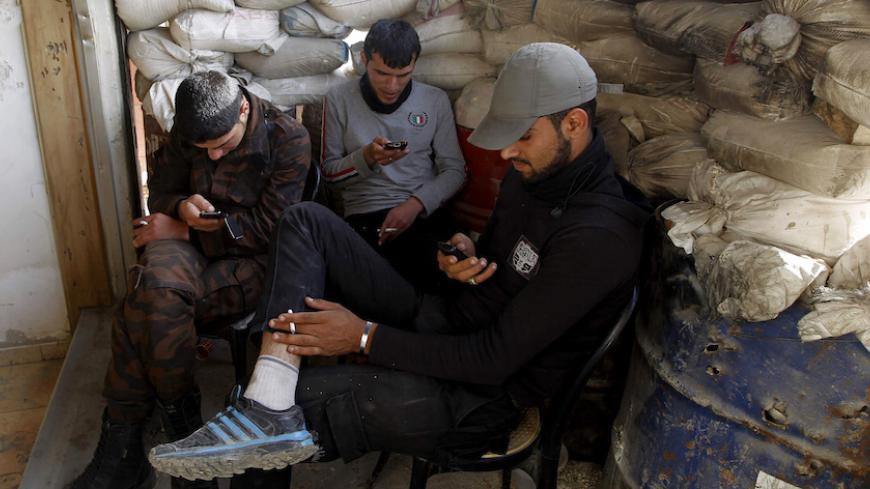 Free Syrian Army fighters use their smartphones behind sandbags in the al-Maysar neighborhood of Aleppo, May 3, 2014. - REUTERS/Jalal Al-Mamo

ALEPPO, Syria — In front of his shop window, damaged by airstrikes, Ahmed sat on a wooden chair, so taken with having access to the Internet on his phone that he did not notice Al-Monitor’s correspondent walk into the store. He cast a shy smile and said, “We have become so addicted to the Internet that we can no longer let go of it.”

In the neighborhood of al-Mashhad, as in most of Aleppo’s rebel-controlled areas, wireless networks are widespread. In different parts of the city, a phone will detect dozens of available networks.

Ahmed follows the field developments and news in Syria through social networks. He also receives WhatsApp messages from his friends and relatives. He said, “We now need the Internet more than ever because otherwise, we cannot know what is going on around us. The Internet has become necessary to communicate with family and friends who are being displaced to distant lands. The Internet is the best and fastest way to stay in touch with them.”

For most of the population, the wireless networks’ monthly fees are affordable ($3 per gigabyte), and this has contributed to their spread. Mohamed Badawi, a wireless service provider in the neighborhood of al-Maysar, told Al-Monitor, “We receive daily requests to cover new places with wireless network towers. People here subscribe to wireless networks, the subscription fees being affordable for most of the people and cheaper than other means, which see frequent interruptions. For example, 1 gigabyte on 3G SYRIATEL lines costs 1,500 [Syrian] pounds, which is the equivalent of $5.50 [on the black market].”

These networks seem to be the most stable means of Internet access in rebel-controlled areas in Aleppo, where Turkish services reach northern Syria.

International satellite services (such as Tooway and Astra Connect, among others) are slow, and they experience severe disruptions in northern Syria due to traffic. Also, the regime cut off DSL lines from rebel-controlled areas in Aleppo after the entry of the Free Syrian Army in late July 2012. The only two private mobile networks available in the country (MTN and SYRIATEL) offer service only in neighborhoods located near regime-controlled areas.

The biggest beneficiaries of wireless networks are opposition institutions such as the local councils, and relief agencies, media offices and independent journalists. Safwan Halabi, a journalist working for the Sawt Raya radio station, told Al-Monitor, “The Internet was our means to convey what is truly happening in Syria, and we had to resort to VPNs [virtual private networks] to avoid the control of the regime security services. However, now we no longer need VPNs, and we are freely using the Internet thanks to the Turkish wireless networks, which are a good alternative to costly satellite Internet devices."

The Hawa Net project, started in October 2014 under the auspices of the Syrian interim government, was the first wireless Internet project in the rebel-controlled areas. It was followed by several private projects that rely on wireless signals from Turkey to Syria and connect neighborhoods and towns.

“The idea was to introduce an alternative to the Internet service provided by the regime, as it monitors such service and controls its interruption,” said Mahmoud Raouf, a communications engineer in the Hawa Net project in Aleppo. Raouf also told Al-Monitor, “There are now dozens of similar projects, which will create a kind of competition in terms of speed and subscription fees.”

The wartime circumstances have made Internet provision more difficult in Aleppo. Raouf explained, “The network towers have been subject to shelling several times, which led us to additional costs and sometimes caused disconnection. Moreover, the high hills and mountains, which are necessary for wireless communications towers, are mostly in either regions witnessing clashes or under the regime's control. When high hills and mountains are available, they allow us to cover a wide area.”

The proliferation of Internet access in the rebel-controlled areas seems unusual in light of the war raging in the country, but it works to keep the population in touch with the world in the almost complete absence of other means of communication.