Safak Pavey, who lost a leg and an arm in a train accident, spent years working on humanitarian missions in conflict zones and is now fast rising in politics as an active female member of Turkey’s parliament. 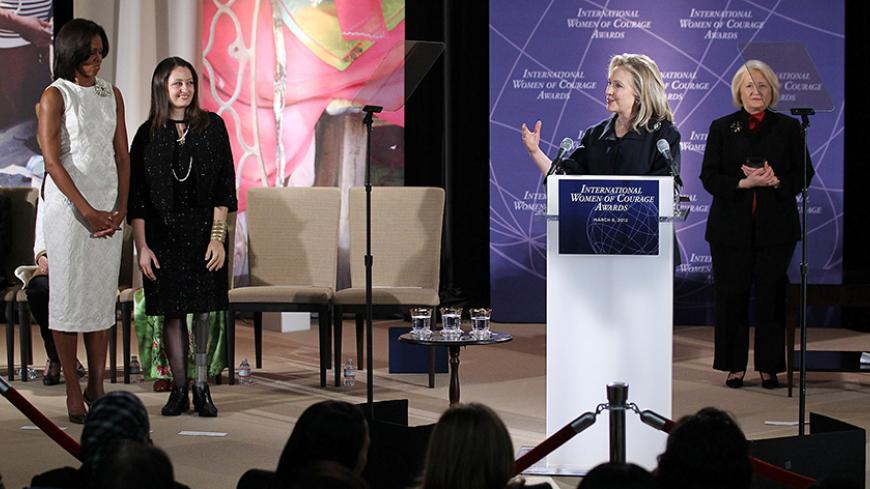 Safak Pavey (2nd L), a member of Turkey's parliament, is introduced by US Secretary of State Hillary Clinton (2nd R) during a presentation ceremony of the International Women of Courage Awards as first lady Michelle Obama (L) looks on at the State Department in Washington, March 8, 2012. - Getty Images/Alex Wong

How does one turn pain and injustice into hope while facing all the beauty and ugliness of the world? How does a beautiful woman emerge as an active world citizen and teach lessons of humanity after losing a third of her body? It takes inherent humane tenderness, benevolence, willpower, courage and, most of all, zest for life.

Turkish parliament member Safak Pavey was a 19-year-old student of arts and cinema in Switzerland when she lost a leg and an arm in a train accident while seeing off a friend diagnosed with a brain tumor.

“I was getting Mira into the train when I felt the train begin to move with the doors still open. One of us was going to fall; there was no escape. I remember pushing her in and … me falling,” Pavey told Al-Monitor. “In the movies, people fall under trains and then rise up and go on with their lives as if nothing has happened. It didn’t work like this for me. My life was completely transformed.”

After the May 24, 1996, accident in Zurich, Pavey underwent a long process of treatment and recovery. The extraordinary willpower she displayed during that time made her the subject of an academic thesis at University Hospital of Zurich. It was later published as a book.

Pavey’s husband could not bear the trauma and chose to part ways. She remains dignified and straightforward when recalling those days. “Of course, I suffered. But compared with what I suffered throughout my life, it was not that much,” she said. “When someone acknowledges his weakness and tells you he can’t take it, I respect that.”

The suffering made Pavey stronger. Instead of giving up on life, she chose to cling tighter to it. She studied international relations at Britain’s Westminster University and then earned a postgraduate degree from the London School of Economics. Her research on non-Muslim communities’ property rights in Muslim countries was well received.

Pavey soon engaged in international activities. She worked with Shirin Ebadi, the Iranian lawyer who won the Nobel Peace Prize in 2003, assisting her with publications on refugee rights in Iran.

She then served at the United Nations High Commissioner for Refugees (UNHCR). Her disability did not stop her from doing work that many non-disabled people could hardly cope with. From 2003 to 2010, she worked as a UNHCR humanitarian officer in Algeria, Egypt, Yemen, Lebanon, Syria and Iraq, and as a spokesperson in Iran and Afghanistan. In Baghdad, she volunteered for a position that required her to wear a 30-kilogram (66-pound) steel vest and a helmet, on top of the already heavy prostheses her body carried.

Recalling her days in conflict regions, Pavey shared the following memories with Al-Monitor: “While working on a mine-clearance mission in Lebanon, I saw how people would run into the cleared land and embrace their trees. I’ll never forget the elderly man who tightly embraced a tree, weeping, ‘I missed you.’

“In Afghanistan, during a trip to a border region, I forgot to take the charger for my leg prosthesis. The boys used ‘tin technology’ and a radio to make a charger for me, which was truly an extraordinary experience. We made fun both of ourselves and our genius and laughed a lot. It is a unique memory for me.”

In 2011, Pavey was named one of the Ten Outstanding Young Persons of the World by Junior Chamber International. 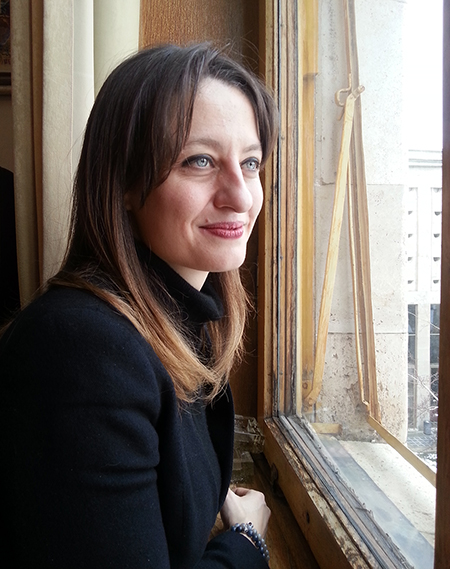 Safak Pavey looks out the window of her parliamentary chambers. (Photo by Tulay Cetingulec)

No longer just a train accident victim, she was becoming an active, internationally recognized world citizen. Her work drew attention in Turkey as well. In 2011, while she held a senior position at the UNHCR, Turkey’s main opposition Republican People’s Party (CHP) offered for her to come on board and run in the general elections. At age 36, she became a parliament member and soon rose to the position of CHP deputy chair.

Back home, she focused on rights abuses affecting various groups — disabled people, minorities, children, female victims of violence, refugees and torture victims — and sought to raise awareness of their plights.

At the outset of her political career in Turkey, Pavey became the target of vicious attacks. “She is both disabled and a CHP member,” one columnist said after a speech she made about dress restrictions in parliament. Parliamentary rules at the time barred women from wearing pants in the general assembly, which made Pavey’s leg prosthesis a subject of discussion.

A year and a half later, female lawmakers saw the pants ban in parliament lifted, along with the ban on headscarves. Pavey, who up until then wore a skirt, closed the subject, saying, “I find it strange that my skirt and leg [prosthesis] should generate that much talk. The only places where I cover my leg are the war zones where people cannot get prostheses.”

Pavey won international recognition for the duties she boldly volunteered for despite her disability. On March 8, 2012, International Women’s Day, she received the US Secretary of State's International Women of Courage Award for her work with persons with disabilities, vulnerable populations, women, children and minorities around the world.

I asked Pavey how she felt at the ceremony as she received the prize from Secretary of State Hillary Clinton and First Lady Michelle Obama. “I felt very embarrassed, as if taking something that didn’t belong to me. In my family tradition, we are not used to being in the spotlight and getting awards for [good] deeds,” she said. “Yet, you feel strangely proud when you suddenly realize that the small things you have done throughout your life have accumulated and others have noticed your efforts.”

Safak Pavey speaks to the author during an interview in her parliamentary chambers. (Photo by Tulay Cetingulec)

Speaking at the ceremony, Clinton praised Pavey as “an effective local and global champion for the rights of women, refugees, persons with disabilities and so many others.” She stressed that Pavey was the first woman with a disability to sit in Turkey’s parliament and highlighted her international work on behalf of the UN Convention on the Rights of Persons with Disabilities.

A major factor in Pavey’s perseverance was what she describes as the ability of her mother, prominent Turkish journalist Ayse Onal, and her brother Mehmet to “turn a tragedy into a comedy.”

She recounts the following scene in the hospital room in Zurich when her family arrived after the accident: “As they entered the room, I noticed my mom was wearing my favorite red shoes. We have the same size and I never managed to keep her away from my shoes. I thought she did it on purpose this time, as if to say that nothing extraordinary had happened. Her first words baffled the doctors but not me. Pointing at my prominent ear, she said, ‘While having all those surgeries, why didn’t you get your ear fixed for free?’ When I responded with a smile, my brother chimed in, ‘Thanks to your accident the teacher is now treating me great.’ I guess white lies are the best painkiller. I was in limbo, between hitting the bottom and floating to the surface. [My family’s] opportunism over the accident wiped away my potential feelings of helplessness.”

Hitting the bottom and then rising up to the top — this is perhaps the best summary of how Pavey was reborn and became a hope for people in desperation and need. Coming back from the verge of death, she embraced life with greater zeal to become an inspiration for many. Is this perhaps a sign that she was born with a mission?

“I’ve always believed that what makes people different is the way they have learned to perceive human values. I was raised in a family where respect for the building porter came before respect for the boss. I was taught it was a disgrace to create PR and publicity over efforts one makes for people in need,” Pavey says. “If that’s a mission, I’d say I have the mission to demand freedom and equality for those who demand it the least and those who are not yet aware that those are indispensable values.”

In Turkey, laws change too often. The country is on a course to a more repressive regime rather than to a stronger democracy. Commenting on the protection of acquired rights, Pavey says, “To win back one’s rights is so hard after one loses them. Social rights are acquired with century-long struggles that exact heavy tolls. And traditions are so resilient that those rights take root only step by step. Take, for instance, women’s rights, disabled people’s rights or racial rights. And when you eradicate those rights, society morphs at an incredible speed back to the old shape that is being imposed on it. I’ve seen this in countries like Afghanistan and Iran, which had had modern periods in their past, even if brief ones. They behave as if they never went through such periods, as if that legacy has left no mark in the streets and the homes. An Iranian friend of mine, for instance, reacted with unbelievable confusion one day when the wind fluttered her hair [out of the headscarf]. To have her hair unveiled, fluttering in the wind, was a terrible violation for her. She couldn’t accept seeing this as a natural situation.”

And what is Pavey’s biggest dream? “To overhaul our education system with proven positive models so that we have new generations who are professional and spirited young people.”