The Ministry of Health is withholding information about the situation of Syria's AIDS patients, many of whom are trapped in war-torn areas without access to services. 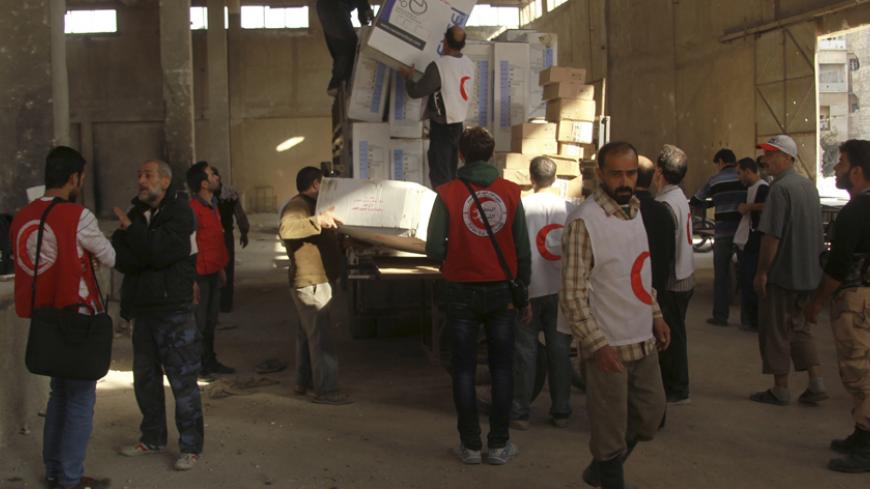 DAMASCUS, Syria — In an atmosphere of official secrecy in which data is limited on patients with acquired immune deficiency syndrome (AIDS) and their ability to get treatment, Al-Monitor was able to get some information through health industry sources, one of whom works at the infectious disease control center and another at the Ministry of Health.

Jamal Khamis, the director of the National Program for Combating AIDS at the infectious disease control center, which works in cooperation with the Syrian Health Ministry, revealed in his latest statement to the Baath newspaper in February that by the end of 2014, 833 AIDS cases were recorded in Syria, mainly in Damascus and its countryside. He also noted that only 154 Syrian AIDS patients receive treatment for free, while the price of each medication refill is more than many of the rest can pay.

The Syrian regime can only offer services in the areas under its control, and many people are stuck elsewhere with no access to medication and testing. Official statements from the Health Ministry and the center give only the number of patients, giving the impression that the war has not affected the patients at all. The statements do not indicate the type of treatment and the amount of medicine available, nor do they supply the contact information of specialists and health clinics in the cities and villages. All the information provided by the official media assures the public that everything is fine and that the patients have no problems at all.

With the help of an employee at the infectious disease control center in the area of Zablatani — adjacent to the Jobar neighborhood of Damascus, where battles between the regime and the opposition are ongoing — Al-Monitor was able to communicate with "Alaa al-Zein," a patient who has been receiving treatment for two years now and also works at the center. He told Al-Monitor over the phone, “There is no special medical care for AIDS. I come here every two months to take my medicine, not knowing if I will be hit by a mortar bomb from Ghouta or shot down by snipers. Sometimes I have to pay $100 [half of a government employee’s salary] to get necessary tests such as the viral load level.”

Zein noted that Syria lacks AIDS specialists, unlike neighboring countries. He added, “I am mostly afraid that the medicine will run out of the center again, as happened in early 2013. I had to travel to Lebanon several times for refills, which cost me around $3,000 in five months. No ordinary patient can afford this, and the General Security in Lebanon no longer allows Syrians to enter.”

Zein spoke of his fear of running into his friends who go to medical school and practice at Al-Assad University Hospital, where he does his regular tests. It is the only hospital authorized to do them. Being seen by his friends worries him more than the efficacy of the medication. During the last months of 2014, the medication he received had been expired for a month. In 2015, the center was able to provide him with fresh medication again.

An employee at the Ministry of Health told Al-Monitor on condition of anonymity, “Medication stopped coming in for five months in 2013. Most of the patients whose financial situation does not allow them to travel and get refills elsewhere were unable to receive their treatment. Everyone knows that if a patient stops receiving treatment, the disease spreads and the medication’s efficacy weakens.”

He added, “We stopped hearing from patients who live in the countryside and the rest of the provinces due to the military operations and because all roads were cut off. No one knows what is going to happen to them, and the ministry refuses to issue a statement on the matter. The number of patients who receive treatment in Damascus has decreased since 2010 [though there are no official figures]. Some of them officially informed the center that they moved to neighboring countries as refugees to get tested and receive treatment through the UN High Commissioner for Refugees.”

The ministry worker explained that he became friends with one of the patients who used to come to the ministry in 2011, but hasn’t heard from him for two years now. He was a resident of Ain Mnain in northwestern Rif Dimashq, which has been besieged since mid-2012. The source does not know if his friend is still alive, and the same goes for a number of other patients whose fate remains unknown as the ministry refuses to reveal the number of deaths.

With the help of the Ministry of Health worker, Al-Monitor was able to communicate with "Abu Marwan," another AIDS patient. He told Al-Monitor over the phone, “I am afraid I will need surgery in the future. Private hospitals refuse to take in AIDS patients out of fear for their reputation, while specialists refuse to see us. This is why I have to see one specific doctor with the help of the AIDS center, which makes me feel stigmatized.”

He continued, “Undergoing surgery in the governmental hospital of Al-Mouwasat is like committing suicide, since this hospital has a bad reputation. They mistreat us [AIDS patients] and the medical staff’s capability is weak. They make me feel as if I’m dead anyway, so why worry about the standards of health care?”

Abu Marwan believes that AIDS patients in Syria are denied the simplest of rights. They cannot complain through the media for fear of being marginalized, and they know that no one will answer their demands.

Al-Monitor also met with "Wael," who recently received an exemption from military service for being an AIDS patient, following unprotected sexual relations with a young man in 2011. “I am often harassed at checkpoints. The security forces ask about my military service papers to make sure I am not wanted for service and when they see that I was exempt due to AIDS, they often scream derogatory words for the entire bus to hear. This extremely embarrasses me, which negatively reflects on my psychological state. I am afraid news will reach my father someday and he will find out about me,” he said.

The issue of AIDS patients in Syria remains a significant problem that calls for many local and international efforts. For the fourth year in a row, the disease has been at the mercy of a country divided by war, a lack of medicine and poor health care. The media continues to ignore the real problems suffered by AIDS patients, and accurate information regarding their situation remains a secret between the Ministry of Health and the infectious disease control center in Damascus.