Ruth Colian managed to gather the needed resources to establish an ultra-Orthodox women's party that ran for a seat in the Knesset on March 17, but the ultra-Orthodox establishment keeps setting up obstacles. 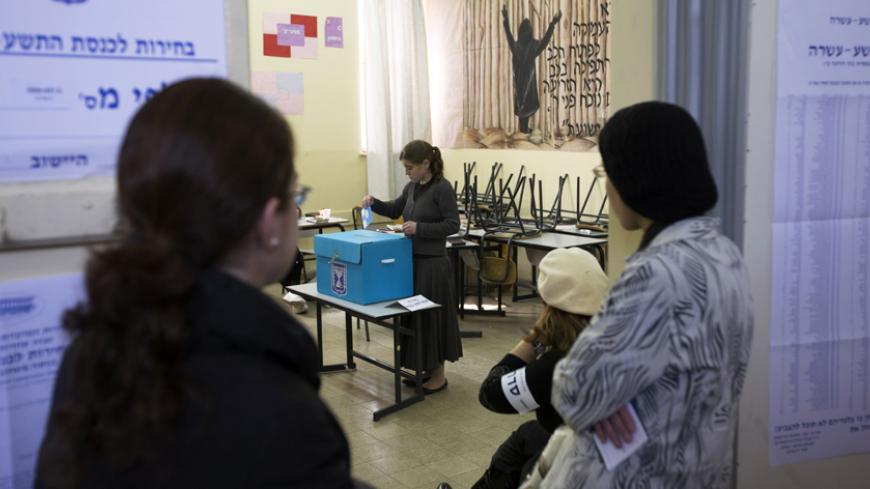 Ultra-Orthodox Jewish women watch as another woman casts her ballot for the parliamentary election at a polling station in Jerusalem, Jan. 22, 2013. - REUTERS/Ronen Zvulun

The name of the most courageous woman in Israel is Ruth Colian. This petite mother of four, age 34, is conducting a courageous but doomed battle from within the ultra-Orthodox community in which she lives against the Orthodox rabbinical establishment. I have been following her with wonder and admiration for several years. Colian has sworn to bring to light the plight of hundreds of thousands of Orthodox Jewish women, and to free them from lives of enslavement, abuse and anonymity.

She has created a political party of ultra-Orthodox women — the first in the history of the State of Israel — that ran for a seat in the Knesset on March 17. For many years, she has exhausted the legal system and other institutions with petitions, demonstrations and locally organized rebellions: for instance, in the municipal elections in the town of Petah Tikva, in the elections for the student council of a college and in struggles against various religious institutions. She does it all virtually alone, with her own two hands, fighting tooth and nail. She encounters defeat after defeat, gets up, dusts herself off and moves on. She knows that her victory will be measured by the clock of history. At some point, maybe in a year, or 10 or 50, an ultra-kosher Orthodox woman will get her very own seat in Israel’s Knesset, the legislative body of the State of Israel. When that happens, that woman will know that her path to the Knesset was prepared by Colian.

Intensive coverage has been accorded by Western media to women living under radical Islamic rule: Saudi women not allowed to drive a car, women disenfranchised of the right to vote, to express and realize themselves and women devoid of personal freedoms. The media devotes very little space to the condition of Jewish women in the ultra-Orthodox world. There are several large ultra-Orthodox communities in the United States, and in Israel a huge ultra-Orthodox community flourishes, with about 1 million members, about half of them women.

Ultra-Orthodox women are generally forced to bear on their own the burden of providing for the family (the men often devote their lives to holy studies). They raise a large number of children (an estimated average of six to seven per family), slave away around the clock to maintain jobs and the home, bear and raise children, clean, cook and so on, while hidden by their community inside their homes. These women are virtually not seen in public. They vote in Knesset elections but as far as their community is concerned they are not allowed to run in them (none of Israel’s three ultra-Orthodox parties — Shas, Yahadut HaTorah and the new party of Eli Yishai, Beyachad — have female lawmakers). They are not involved in political activity and do not take part in festivals and joyous occasions, unless they are discreetly hidden. Even at the Western Wall, Judaism’s holiest site, they are discriminated against: Their access to the area is from a narrow side entrance. They are banned from mixing with men in public. They are forced to cover their hair, sometimes their face, and wear modest clothing; the more radical among them force the women to shave their heads and to wear a scarf or a wig instead.

Colian is one of the first to dare come out against these phenomena in public, trying to breach the walls of the women’s ghetto. She tried to run in the elections for the student council at the college where she studied law and in the municipal elections in the town where she lives, Petah Tikva. She conducts bitter struggles in all sorts of areas and each time finds herself facing the entire ultra-Orthodox rabbinical establishment. They try to kick her young children out of the ultra-Orthodox institutions where they go to school, curb her activities, designate her a rebel, a heathen, a traitor. She was supposed to have broken down and given up a long time ago, but she hasn't.

When the Knesset elections moved up to March 17, she decided to turn the tables on the establishment and established a movement called “Bizchutan, ultra-Orthodox women foster change.” She somehow managed to raise the required funds and put together a list of Knesset candidates. Together with three other ultra-Orthodox women she worked on getting through to ultra-Orthodox women and convincing them to pick her party as their representative when they find themselves behind the curtain at their polling station. Elections in Israel are conducted by secret ballot, and in principle, this could have been possible. But Colian, without funding or rich backers, had been unable to even film campaign commercials for television and social media (which all other parties produced). When she tried to place advertisements in the ultra-Orthodox press, she was turned down on the spot.

Two weeks before the elections, Colian had been holding discreet negotiations with Yesh Atid, the centrist party of Yair Lapid, one of the strongest liberal voices in Israel. The idea had been to sign a surplus vote-sharing agreement between the two parties. Such a move would position Colian at the top of the media agenda and provide her with the needed publicity. Lapid, who had yet to sign a surplus vote-sharing agreement with any party, gave the idea serious consideration. There is no electoral value of such an agreement with a party that will not reach the electoral threshold, but signing it would generate great ethical and moral value for Lapid, one of whose flagship issues has been the fight against the ultra-Orthodox establishment and the effort to impose a military draft on ultra-Orthodox men and to encourage them to go out into the workplace, instead of studying all day.

In the end, Lapid opted for investing his energies in an attempt to reach a surplus vote-sharing agreement with Isaac Herzog’s Zionist Camp. Simple politics trumped morality. Colian, in despair, considered a street demonstration with her party’s other candidates in the town of Beit Shemesh, with its particularly radical ultra-Orthodox community. “We want to stand on the sidewalk on which women are not permitted to walk, across from the synagogue, and see what happens,” she told Al-Monitor the week before the elections. “I know this could result in a big melee, but someone has to do this at some point.”

Beit Shemesh has often made the headlines in recent years after ultra-Orthodox radicals attacked women — cursing them, spitting at them and insulting them after they walked on sidewalks that had been designated off-limits. These are exactly the kinds of phenomena that Colian is fighting.

Following the elections, she sounded defiant. “I'm not naive. I know that the minute the elections are over, Yair Lapid and all the other politicians won’t give us the time of day, us ultra-Orthodox women. They will need the ultra-Orthodox parties in the government coalition and will forget our existence. But we are here. We are hundreds of thousands of women fed up with being a disciplined pool of voters. Women who want to realize dreams, who are sick of looking on from the sidelines, discarded in corners and used for the sake of procreation, cooking and cleaning. Every such woman is a whole universe. Among us are very talented women, who could be effective in public office. It’s about time that someone represent this large group in the legislature. Someone closely familiar with our distress. One day it will happen,” she said.

In the run-up to the elections, Colian's party scored its first isolated victory when the Lod District Court complied with the party's demand to require the ultra-Orthodox newspaper Yated Ne’eman to print a fully paid election advertisement in its name. The newspaper quickly appealed to the Supreme Court, which decided to overturn the decision until more exhaustive deliberations on the issue could be held. The women did not give up. Meanwhile, they received the unexpected support of reserve Maj. Gen. Giora Eiland, former head of the National Security Council, who publicly declared his support for the party. Eiland even donated money toward their improvised election campaign.

But on the day of the election, they were less successful. The Bizchutan list (Hebrew for “in their merit") garnered 1,977 votes. To meet the electoral threshold and earn four seats in the Knesset, more than 120,000 votes are required. But Colian and her friends are far from despair and will continue on the path they have set for themselves. The number of votes they received coincidentally represents an important historic year (1977) in the annals of Israel — it was the year of the first “great political turnabout” of the state. That was when the Likud Party rose to power and replaced the Labor Party, which had ruled Israel for the first 30 years of its existence. Someday, the turnabout of ultra-Orthodox women will also take place. The first baby step in that direction has already been taken. Now the journey begins.