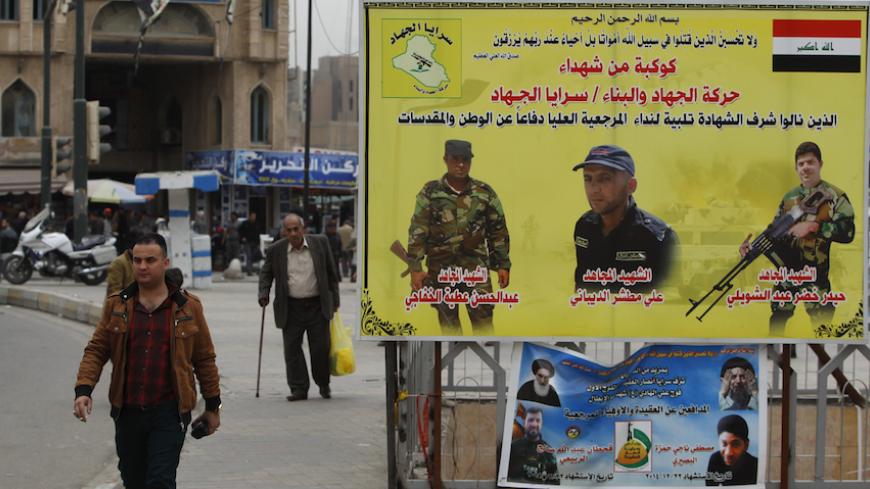 A man walks past a poster in Baghdad commemorating Shiite fighters who were killed in battles with Islamic State militants, Feb. 7, 2015. - REUTERS/Ahmed Saad

NAJAF, Iraq — At a conference for dialogue between religions and sects in Baghdad on Jan. 31, Iraqi Prime Minister Haider al-Abadi said that defending Shiites and Sunnis cannot be achieved by saying “O Shiites” or “O Sunnis,” but through cohesion and dialogue between the various components of the people in the face of terrorism.

“No person is entitled to take the law into his own hands,” he said, denouncing reprisals happening in the name of the law.

Abadi’s words came in response to vengeful human rights violations occurring in areas liberated from the Islamic State (IS), saying: “The killings, the attacks on holy sites, burning people’s homes and attacking life and property in the liberated areas is no less serious than terrorism.”

In his speech, Abadi talked about how justice in Iraqi society is typically understood. This understanding is incompatible with modern developments in resolving human conflicts. Iraqis generally see justice in the contexts of revenge and reprisals. This is reflected not only in Iraqi public opinion, but also in the country’s legal and judicial systems. In contrast, revenge is no longer part of justice in modern political philosophy nor in a modern country’s legal and judicial practices.

In the past, justice was understood as “eye for an eye” and was achieved by taking revenge against the offender. Justice was focused on harming the criminal like the latter had harmed the victim. Justice was not compensating the victim for his damages.

This understanding of justice has become established in the long years under dictatorial regimes. But the problem was exacerbated by expanding the punishment to include individuals not involved in the crime. After any objection against the government, the former regime would punish whole families, entire clans, and sometimes whole cities. The families of a condemned person would pay for the bullet used to executed him. A fugitive’s wife, mother or sister would be detained to force him to surrender, or to at least harm his morale.

Collective punishment was prevalent during this era. After a failed assassination attempt against his person in 1982, Saddam Hussein executed 143 people, including children, arrested 1,500 others and destroyed nearly 1,000 square kilometers (386 square miles) of agricultural land. After being accused of forming an illegal organization, more than 40 Iraqi army officers were executed in 1995. Most of them were from the city of Ramadi in Anbar province in western Iraq. Many in that city peacefully protested the executions. The regime retaliated by killing dozens and arresting hundreds.

Although Iraq was liberated from Hussein's dictatorial regime after 2003, the former understanding of justice is still alive and active in the laws, regulations and government practices. The current violations by government agencies in Iraq are the result of this mindset. For example, Hadi al-Amiri, the head of the Badr Organization — which is part of the popular mobilization forces fighting IS in Diyala — said in December 2014: “The day of reckoning is drawing near and we warn all families in the area to leave, because we will strike a devastating blow.”

There are dozens of reports and videos showing unjustified revenge acts by government forces and other military forces against civilians or detainees that are supposed to be treated in accordance with international laws. These acts are not officially ordered, and they became a trend to the point that Ali al-Sistani made statements denouncing them.

What Iraq needs is restorative justice, not revenge justice. Iraq needs restorative justice on the basis of compensating the losses incurred by victims and society in general in the context of a civil compromise, regardless of how the offender is punished for the purpose of revenge. Even the offender should be involved in the process to do his duty to compensate for the damages and also to help himself return to the community’s embrace. This matter is important because there are many situations where, after completing his sentence, the criminal becomes a worse offender, causing greater harm to society, like Abu Bakr al-Baghdadi himself. He was a low-ranking member of al-Qaeda in Camp Bucca. But after he was released he got promoted and gradually became the highest leader of IS. Many other members of IS are also former prisoners.

Modern governments in the world, such as in Britain, Australia and the United States, achieve restorative justice through a range of measures, which include: creating public structures to achieve justice for all, and diagnosing the damages resulting from the crime.

The only serious concern about this matter is seen in Sistani’s guidelines that he expressed in his statement. In the latest one issued Feb. 12, he urged everybody in the Iraqi army and the Iraqi popular mobilization to abide by the moral rules and ethics of war, and forbade harming any suspect who hasn’t been proven guilty of involvement with terrorists. He also strictly forbade the forces from punishing IS militants who were arrested, as punishment should only happen through legal proceedings and according to judicial verdicts. He also banned bloodshed, insulting people, attacking children and women and harming those who hand themselves in.

Sistani also prohibited the desecration of bodies and called on the militants in the popular mobilization forces to have the highest human ethics in their battle against terrorists. He strictly forbade retaliatory acts and behavior and despicable tensions. He called for absolution, forgiveness and reconciliation as a general rule for the militants.

Hussein al-Sadr, the other Shiite authority, followed in Sistani’s steps and issued similar instructions Feb. 16, stating: “By God, have mercy on the regions that you liberate and pass through. The people there are expecting your virtue and bravery, and they are testing your patience and faith. Sow seeds of love in your hearts and give them reassurance. They are your brothers in religion and faith and in the country and humanity.”

Although religious instructions have a strong positive impact on Iraqi society, they are not enough to achieve restorative justice.

The transition from the revenge mindset to the restorative justice mindset requires an integrated project that includes laws, education and public culture. Iraq will not recover from its diseases that accumulated over its long history without dismantling the prevailing mindset resulting from actions and practices of former regimes.