IS eager to confront US ground forces in Iraq 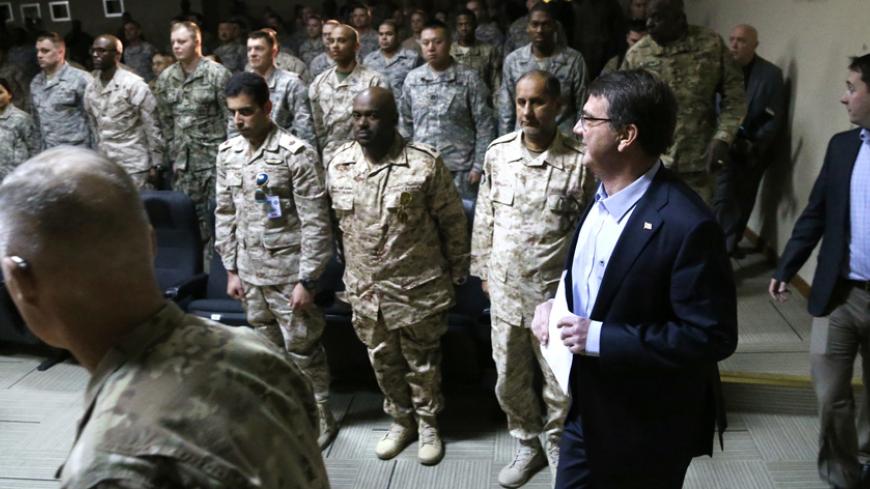 Since first seizing Iraqi territory in June 2014, the Islamic State (IS) has carefully selected targets based on a strategic vision of the regional conflict and global repercussions, often broadcasting its intentions in videos released online. Chief among the messages related to its vision and battlefield goals is a call for direct confrontation with the United States on the territory of Muslim countries, directly challenging President Barack Obama and emphasizing points that draw attention to the American presence in Iraq.

In one of its first media productions after taking control of Mosul, IS announced its goal of creating a new Middle East by wiping away the recognized borders of the current nation-states. It did so by proclaiming the annulment of the Sykes-Picot agreement and eliminating the boundary between Iraq and Syria. It also declared the establishment of an Islamic caliphate to which all Muslims supposedly belonged.

Subsequently, the IS member who was videotaped beheading captured foreigners addressed Obama directly in the recorded killings, even before the United States assembled an international coalition to conduct military operations against the group, launching its first strikes Sept. 19, 2014. Before killing a Kurdish captive in late January this year, the executioner announced that IS would slaughter Obama in the White House and turn the United States into a “Muslim province.”

IS has insisted on framing the current conflict as a struggle between Islam and the West, invoking the word “crusaders” to refer to Westerners. In a video posted Feb. 15 showing the mass beheadings of kidnapped Egyptian Copts, the narrator links the killing of the Christians to the death of Osama bin Laden at the hands of US commandos and vows to mix their blood with the sea in which they disposed of bin Laden's body.

On Feb. 12, IS fighters had attacked Ain al-Asad, a base west of Ramadi in Anbar province. It is Iraq’s largest military base and the site at which more than 300 US Marines are training Iraqi military and security forces for the fight against IS. The attack was the first IS offensive after a lull of two months. The offensive began after Obama's request to Congress the preceding day to authorize an expansion of the fight against IS by sending “limited” ground troops to Iraq. Perhaps the attack was in part aimed at inflaming US public opinion and prompting Congress to vote in favor of the proposal, thus opening the door to possible direct confrontation with broader US participation in the fighting.

Although Iraqi forces protecting the base repelled the attack, IS troops remained nearby, in the city of al-Baghdadi, some five kilometers (3 miles) away. Fighting continued in al-Baghdadi, with IS in control of most of the city and besieging the rest. IS' capture of the the city exposes Ain al-Asad to continuous threat.

IS appears to be planning, or hoping, to challenge the United States in a ground fight in the vast areas of Iraq and Syria. IS believes that no matter how strong and numerous US regular forces are, they will not be able to win against its trained irregular fighters who have been confronting Iraqi forces in northwestern Iraq. The organization wants a repeat of the battle of Fallujah in 2004, when the United States failed to overwhelm the militia fighters in the city and lost a number of Marines before retreating. With the quantitative and qualitative progress it has made, IS envisions causing even greater losses among US troops.

Direct participation by US forces in a war against IS would be used to provide legitimacy to IS propaganda portraying the fighting as evidence of the ongoing Western crusade against Islam. This could help the group mobilize more supporters in majority Muslim countries and among Muslim communities in the West. It could also help expand the combat zone by activating IS cells to carry out attacks in the West and eventually lead Western states to withdraw from the region, enabling IS to impose its will.

Additional US troops might also result in confrontations with pro-Iranian Shiite militias, as Iraqis allied with Iran oppose the presence of US ground forces in the country. Some Iraqi parties have been spreading conspiracy theories about US planes airdropping food aid and gear to IS forces based on one incident of a delivery of supplies to Kurdish peshmerga inadvertently ending up in IS hands. The Hezbollah Brigades, a Shiite militia, even went so far as to announce “its intention to target US helicopters providing IS elements with weapons, gear and food by using advanced anti-helicopter missiles across the military fronts facing IS.”

No quick or definitive solution to the problem of IS appears to be on the horizon. The eventual resolution of the crisis must, however, involve some sort of agreement among regional powers and the US-led international coalition. Meanwhile, the United States sending ground troops to Iraq unilaterally will likely only contribute to deepening and expanding the chaos.