Is the Shiite revival here?

Iran's support of religiously motivated forces in the Middle East has been viewed by many as a success while Saudi Arabia has struggled to find find reliable proxies. 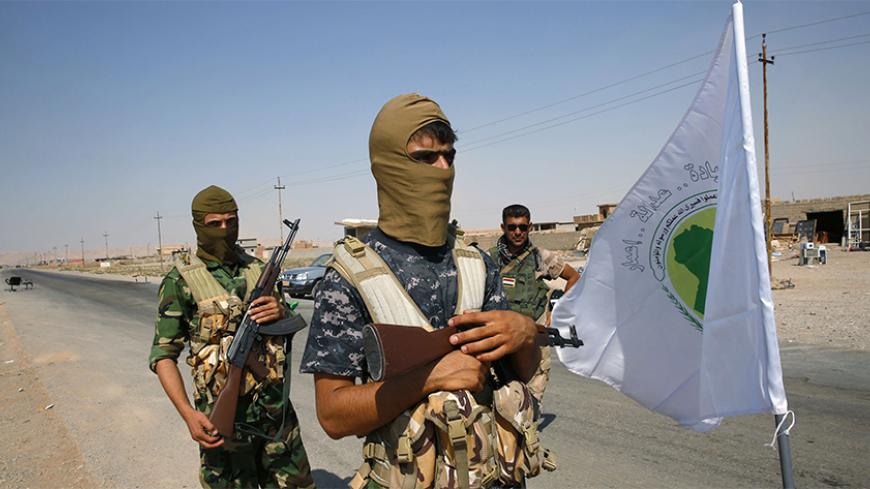 Fighters from the Shiite Badr Brigade militia stand near their flag as they guard a checkpoint along a highway in Iraq taken from militants of the Islamic State, outside the town of Sulaiman Pek, Sept. 5, 2014. - REUTERS/Ahmed Jadallah

In the book "The Shia Revival: How Conflicts within Islam Will Shape the Future," Vali Nasr, an Iranian-American researcher on the crises in the Middle East, came to the conclusion in 2006 that the religious struggle resulting from the rise of the Shiite identity in the region would reshape the Middle East. Developments in recent years have proved that this view seems accurate.

Today, Shiite forces are strongly present in Lebanon, Syria, Iraq and Yemen. They are united and firmly associated with the Iranian axis. This new situation did not happen by chance or overnight. Rather, it was preceded by many arrangements that Iran has been making for decades.

The sectarian rivalry in the region began with the Iranian Revolution in 1979, when Saudi Arabia and Iran raced to find and endorse revolutionary groups that fought different governments based on Islamic ideology and inspired by the Quranic terms of jihad in the Middle East. These groups include al-Qaeda for the Sunnis and Hezbollah and the Houthi movement for the Shiites. While Saudi Arabia has invested in jihadist organizations in Afghanistan — such as the Afghan Arabs, or the Arab mujahedeen, during the Soviet occupation of Afghanistan — Iran has invested in the Shiite opposition forces in the Arab countries, such as Hezbollah in Lebanon, Hezbollah al-Hejaz in Bahrain and the Badr Brigade in Iraq.

The Saudi investment has lost, as it has turned against Saudi Arabia. It has evolved into al-Qaeda, the Islamic State (IS) and other Salafist organizations that have placed Saudi Arabia at the top of their enemy list. The Iranian investment has, however, greatly succeeded and was gradually expanded toward non-Shiite majority areas such as Syria and Yemen. Today, 30% of Yemen’s population is Shiite, and the most influential group there is the Houthi movement, which is close to Iran. In Syria, Iran has succeeded in protecting the Bashar al-Assad regime, which is under the control of the Alawite minority close to the Shiites.

The year 2003 was decisive in reshaping the Middle East, as Iran opened the door wide to Iraq, economically, politically and religiously — Iran opened an embassy in Iraq before any Arab country did, and many still haven't — and made many agreements in various domains. Nevertheless, Saudi Arabia has refused to accept the change and dealt with the new Shiite reality in Iraq with suspicion and mistrust. Following the IS threat, Iran was one of the first that volunteered and supported all Iraqi parties, including the Kurdistan Regional Government (KRG), the central government and the Sunni factions fighting against IS alongside government forces. In the absence of a prominent presence of the regional Sunni power represented by Saudi Arabia and Turkey, it goes without saying that this path would lead to a greater Iranian influence in Iraq in the post-IS era.

In Syria, the Arab-Iranian opposition was scattered between the Salafist opposition and the Syrian government. Time has shown that the project supporting the Salafist opposition failed and that the project supporting the Syrian government has succeeded brilliantly. Since the Syrian conflict broke out, everyone expected Assad’s regime to fall, like in Libya, Egypt and other Arab Spring countries. But Assad still remains in office to this day — his government being the only one that has not fallen following the Arab Spring. Moreover, international pressure on Assad has significantly decreased, and Western leaders have even started talking about opening the door for negotiations with Assad, as US Secretary of State John Kerry recently admitted.

In Yemen, things are similar to the situations described here, particularly that of Iraq. Saudi Arabia has repeated the same mistake of showing defiance and not dealing with the new reality, while Iran has opened up to change and provided unlimited support for the increasingly emerging Shiite force in Yemen. Saudi Arabia included on March 7, 2014, the Shiite Houthis on its terrorist list, and has refrained from dealing and talking with them. This is despite the common Saudi Arabian and Houthi interest in fighting al-Qaeda and the Muslim Brotherhood in Yemen.

Meanwhile, on March 1, Iran Air operated its first direct flight between Tehran and Sanaa, the first in 25 years. Iran has also hosted a Houthi delegation, which resulted in the March 13 signing of agreements between the two countries to help Yemen get Iranian oil and Iran's support in the construction of power plants and modernization of some strategic ports in western Yemen.

There is certainly a clear change in the balance of power in favor of Shiite Iran against the leaders of the Sunni project. Yet, this does not require a further rivalry devastating the region. Rather, it should be dealt with through negotiations that recognize the new reality, and by determining joint action mechanisms between the Sunni and Shiite forces to achieve stable peace in the region.

It seems that a part of the Sunni camp got this message, and has already begun to alter its approach toward Iran. Jordan’s Minister of Foreign Affairs Nasser Judeh made an unprecedented visit to Tehran on March 7, during which he suggested holding an inclusive Arab-Iranian dialogue. There was also news that Qasem Soleimani, commander of the Quds Force of the Iranian Revolutionary Guard Corps, visited Amman a few days before Judeh’s visit to Tehran, to discuss security issues on IS activities in Jordan’s neighboring countries.

This step turns out to be important, once we recall that Jordan’s king in 2004 had warned against the rise of Shiites in the region, which he referred to as the Shiite Crescent. He had also accused Iran of meddling in Iraq and changing the balance of power in the region.

The Iranian-US rapprochement — which is translated by meetings between Iranian and US officials for the first time in the history of the Islamic Republic of Iran — has affected the new situation, as it prompted US allies in the region, such as Jordan, to further take Iran into account and to reconsider the option of isolating themselves from it.

In Iraq in particular, there is talk today on the future of the Sunni areas in the post-IS era. The expulsion of IS from Iraq once and for all has been taken more seriously since the recent victories of the Iraqi forces in Salahuddin province — a battle that started in early March. Iraqi Prime Minister Haider al-Abadi announced Feb. 16 that the liberation of Mosul will start in the coming months, and before the end of 2015. After Abadi’s announcement, Sunni parties in Iraq and abroad expressed their concern that Sunni forces in these areas are not yet ready to take them over. The KRG has called to the table the issue until the Sunni forces are able to take control over them.

Yet, what is certain is that the Shiite fighters will not give up the territories they have gained to Sunni groups they do not trust, to avoid the establishment of a Sunni region and the Sunnis' use as a base against the Shiites.

Under such circumstances, it is to the advantage of the Sunni forces to arrange their internal situation first, and to engage in negotiations with the Shiites in Baghdad and Tehran, in order to conclude major deals that would help them restore conclusive peace and stability in the region. The same applies to the ongoing conflicts in Syria and Yemen.

The Iranian enemy — as described by the Sunni forces opposing Iran — is acting according to a comprehensive scheme in the region. Yet, the wise way to deal with the enemy does not always reside in the expansion of war fronts. Rather, it often happens in negotiations, which lead to major historical deals.