Iranians have challenged the media ban on a former president, which received unusually high attention because of his sister's death. 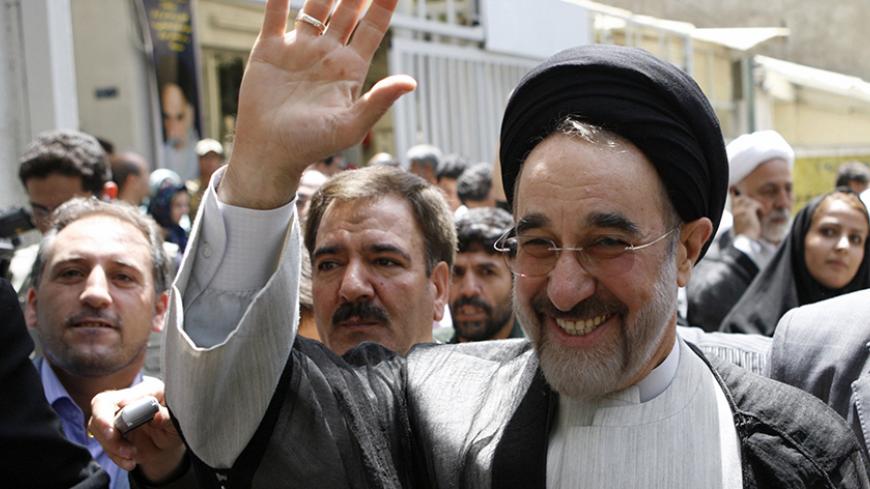 Marking the first time the judiciary candidly mentioned the prohibition, Iranian judiciary spokesman Gholamhossein Mohseni-Ejei told reporters on Feb. 16 that Iranian media remain banned from covering statements and pictures of former Reformist President Mohammad Khatami. But Iranians, who have turned to social media to voice their opposition or support for something, have defied the ban.

Several pages were made on social media sites like Facebook and Twitter (both blocked in Iran) among others to protest the ban. Multiple hashtags were used with the most popular ones being “we will be Khatami’s media” and “Mr. Special” among others.

On Instagram, a page that reportedly belongs to the former president called on Khatami supporters to share their pictures with it. Ever since, dozens of pictures have been shared on the page that now has nearly 87,500 followers.

Another picture shows another Khatami supporter standing next to the former president during his tenure in office. The picture reads: "Khatami is charged with stealing the hearts and minds of millions of Iranians," an apparent reference to the unprecedented level of corruption under former President Mahmoud Ahmadinejad.

But just five days after the official announcement of the ban, Khatami’s sister, Fatemeh, died of cancer. Her death soon became a challenge to the ban as a large number of people turned out for her funeral on Feb. 22. Several prominent leaders, including Iranian President Hassan Rouhani and Expediency Council head Ayatollah Hashemi Rafsanjani, sent condolences to the former president, resulting in some newspapers covering their messages.

Ayatollah Ali Khamenei, Iran’s supreme leader, also extended condolences to Khatami's mother over her daughter’s death. His message was not only covered by newspapers and news agencies, but also was aired on the state TV channels — a routine procedure.

On Feb. 25, a memorial ceremony was held for Khatami’s sister in Tehran. Hours before the official ceremony, a large number of supporters of the Reformist president had gathered outside the mosque in which the ceremony was held. Upon his arrival, many chanted slogans in support of the former president.

Several high-ranking officials, including some of Rouhani’s deputies and Cabinet ministers, along with some members of parliament also attended the ceremony.

But defiance of the ban was not only limited to online campaigns. Several images have been published online showing posters of Khatami on statement boards of several universities including the Semnan and Tehran universities.

However, that was not the end of weeklong events as Khatami conducted the prayer at the body of Seyed Sadeq Tabatabaei last week. Tabatabaei was the spokesman of the revolutionary government formed in the wake of victory of the Islamic Revolution in 1979.

Having to adhere to the judicial ban on mentioning the name or a picture of the former president, many news agencies and websites covered Tabatabaei’s funeral ceremony by leaving Khatami out of pictures and referring to him as “the former president” or “the leader of the Reformist government.”

But the state official IRNA news agency along with several other websites which mainly belonged to the Reformist or moderate camps defied the ban and mentioned Khatami by his name in their reports.

Khatami, a moderate Reformist, served as Iran’s president in two consecutive terms, from 1997 to 2005, when he was succeeded by Ahmadinejad. During his terms in office, Khatami was criticized by some conservatives for his overtures toward the West and for pushing for more social freedoms in Iran.

Following the disputed 2009 elections, Khatami along with three other leading Reformists were accused of being involved for what was described as “sedition.” Former Prime Minister Mir-Hossein Mousavi, Mousavi’s wife Zahra Rahnavard and former parliament speaker Mehdi Karoubi have been under house arrest since then, while Khatami has been banned from leaving the country.

Khatami, who analysts say still enjoys strong support among millions of Iranians across the country, backed Rouhani in the 2013 elections. With less than a year to the announced parliamentary elections in Iran scheduled for February 2016, many say the timing of the announcement was crucial given the fact that the ban could limit the influence Khatami could play on voters.

In his Feb. 16 news conference, the spokesman of Iran’s judiciary had also warned that any violation of the ban on covering news and photos of the ex-president by any media outlet will be dealt with as an offense.

On Feb. 27, Fars News Agency reported that two news websites, Jamarannews (which mainly covers the news about the grandson of ex-leader Seyed Hassan Khamenei) and Baharnews, were blocked at the order of Iran’s judiciary since Feb. 26. Both websites had extensively covered news and photos of the former president last week. Jamarannews was unblocked a day later but the Reformist website remains inaccessible to users.