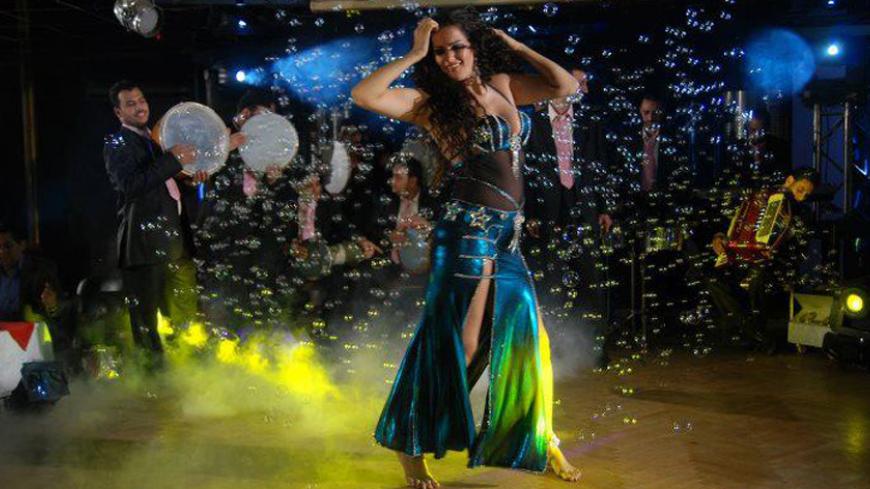 The candidacy of belly dancer Sama El Masry for the upcoming parliamentary elections has stirred controversy in Egypt. Some deem her entry into the race as the natural right of all Egyptian citizens, while others reject the candidacy of a belly dancer known for her “immoral” video clips. Masry has previously made some shocking statements, saying in July 2013 that some viewers use her videos as a substitute for pornographic movies.

Masry (real name: Samia Ahmed Atiyah Abd al-Rahman) holds a bachelor's degree in English literature from Zagazig University. Her father is a history teacher and she started her career as the host of a music show called "Clips" on al-Mehwar satellite channel, she moved on to dancing when the show was unsuccessful.

Masry garnered wide popularity with her opposition videos about the Muslim Brotherhood regime, former President Mohammed Morsi and US President Barack Obama. Her channel, called “Al-Foloul” ("The Remnants," widely used during the revolution to refer to figures from the former regime) mocks the Islamic movement with its suggestive scenes.

Masry declared her intention to run in January while she was in the Netherlands, where she was honored by the Dutch Coptic Association for what the association described as a national role during the rule of the Muslim Brotherhood and courageous positions against US intervention in Egyptian affairs.

Masry’s announcement of her intention to run for the 2015 parliamentary elections came as a surprise for millions of Egyptians. She made the announcement via a video recorded in the Netherlands and said that she intended to compete for the Azbakeya district of Cairo upon her return to Egypt.

She also announced the establishment of a new party, promising to defend freedoms based on their “Western meanings,” especially those of women and children, and the freedom of religion against government constraints. Masry gave the example of the Baha'is, whose religion does not figure on the Egyptian national ID card because the government refuses to recognize it.

Masry added that her candidacy bid came in response to her hometown of Azbakeya's residents, whom she claims asked her to run. She said that she has a strong program that guarantees Egyptian women a lot of freedom. Masry added that she will ensure women win their full rights based on gender equality. She noted that women played a role that was more important than that played by men in the June 30 demonstrations.

Before the Egyptian people had time to absorb Masry’s announcement, the belly dancer started her campaign with a video clip filmed in the streets of Amsterdam, "Sama in Parliament." The video not only raised the ire of Egyptians, known for being conservative, but also angered the Egyptian community in the Netherlands. Some 20,000 Egyptians live there, mainly concentrated in Amsterdam, Rotterdam, The Hague and Utrecht.

The acceptance of Masry’s candidacy by the Supreme Committee for Elections was full of excitement and drama. Masry went to court on Feb. 19 to submit her candidacy papers, but it turned out that her file lacked the required medical paperwork, spawning rumors that Masry had been disqualified. Other sources said that her candidacy had been excluded because her medical report showed alcohol abuse. One hour before the court's doors closed, Masry managed to return with the medical report, which she submitted for the committee's approval to run.

Masry’s electoral symbol is the tank, a bid to show support for the Egyptian military. Her choice was criticized by the Mustakbal Watan Party, whose image is also the tank. The party said that Masry’s adoption of the image is a serious insult to the nation.

Notably, the Egyptian media outlets and musicians union to which Masry belongs were not concerned with her use of profanity and sexual suggestiveness during Morsi’s rule. However, after his 2014 ouster, the union expelled the belly dancer over her "pornographic" videos.

Masry is not the only Egyptian artist to have declared her intention to run for the 2015 elections. Film director Khaled Youssef submitted his candidacy for the Kafr Shukr constituency, while actor Hind Akef submitted hers for Mokattam, singer Mustafa Kamel for Old Cairo and actor Hamdi Waziri for al-Manakh district in Port Said. Actress Tayseer Fahmi and actor Ahmad Daher joined the list of the Independence Movement. All this activity prompted former parliament member Ragab Hilal Hamida, who's running against Masry in Azbakeya, to bemoan the advent of the “belly dancing parliament.”

Most Egyptians oppose the candidacy of Masry for the parliamentary elections, not because she is a dancer, but because her art is strange and immoral to their taste.