Abdel Moneim Aboul Fotouh, head of the Strong Egypt Party and former member of the Muslim Brotherhood, shared with Al-Monitor his views about Egypt's current regime. 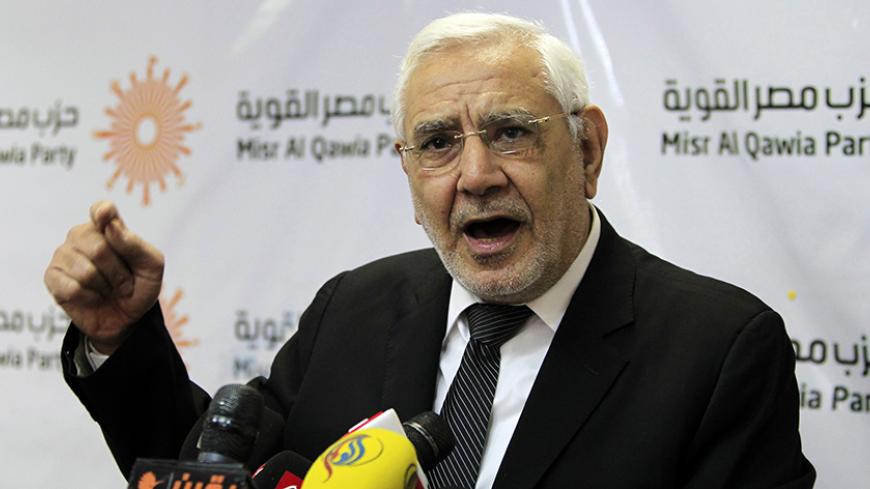 Abdel Moneim Aboul Fotouh is one of the most prominent Egyptian politicians and head of the Misr al-Kawiya Party (the Strong Egypt Party, an opposition party with an Islamic background), which was established following the January 25 Revolution in 2011. He was one of the candidates in the first postrevolution presidential election in 2012. He has had significant experience in political work ever since he was president of the student union, in 1975, during the presidency of the late Anwar Sadat. He was a prominent Muslim Brotherhood leader before he was expelled in 2011 after he decided to run for president.

Al-Monitor asked Aboul Fotouh about the current political situation in Egypt and his opinion on the reasons behind the spread of extremist movements in the Arab world, as well as his take on the war on terrorism.

Al-Monitor:  Is the emergence of extremist groups such as the Islamic State (IS) — which many youths joined — a result of the oppression and tyranny suffered by the citizens of the Arab countries?

Aboul Fotouh:  First, I want to clarify that not all terrorist organizations are related to Islam. They exist around the world and some take Islam as a reference, while others have a Christian background. Thus, they are not limited to the Islamic world. As for IS, it adopts the takfiri ideology and the youth are joining it as a result of the false interpretation of religious texts, which they learn from extremist sheikhs who only take from religion what serves their ideology. Of course, oppression and injustice suffered by the Arab peoples create a suitable environment for this ideology to feed on. Thus, joining armed groups becomes the only option for the youths who suffer tyranny and whose freedom is suppressed. Even Muslim youths living in Western countries have joined IS, despite living under democratic regimes in free countries. Despite democracy, they feel like victims who are being prosecuted for being Muslims and are not treated fairly because when extremist Muslims kill a non-Muslim, the entire world condemns the incident; but when Muslims get killed, no one lifts a finger.

Al-Monitor:  To what extent can Egypt participate in the war against IS?

Aboul Fotouh:  So far, IS is only limited to Sinai in Egypt and this group was previously known as Ansar Bayt al-Maqdis before it pledged allegiance to IS leader Abu Bakr al-Baghdadi. The Egyptian security apparatus, represented by the army and police, is still fighting the group there, but I believe it has failed to confront and eliminate it. Since July 3, 2013, when President Mohammed Morsi was overthrown, military officials have been stating that they are attacking the group’s sites and arresting its members. However, the terrorist group is still capable of launching attacks on the army and police in Sinai.

Al-Monitor:  How do you explain your stance as a person who opposes the military regime in Egypt and at the same time refuses to compare the Egyptian army to the Syrian and Iraqi armies that kill their opponents?

Aboul Fotouh:  My objection to the military regime is a rejection of the policy pursued by the army command in the management of the country; since the military institution is the actual ruler of Egypt now, the security mentality that does not tolerate others is in control of the Egyptian regime. The army’s only key role is to protect the country from any external aggression, not to engage in the political process. At the same time, I assure you that the Egyptian army is patriotic and not built on a sectarian basis. On the contrary, [former Prime Minister] Nouri al-Maliki's forces in Iraq consisted of Shiite soldiers — I usually reject labeling, but that’s the truth — who killed Sunni Muslims, while the Syrian army is confined to the Alawite sect. The Egyptian army resents whomever brandishes a weapon against the nation’s people, and even though the political leadership [presidency] pushed soldiers to kill demonstrators, we cannot generalize and consider that this is what the army’s ideology is about.

Al-Monitor:  Do you expect the situation to worsen and for Egypt to have the same fate as Syria and Iraq?

Aboul Fotouh:  What is currently happening in Syria or Iraq is a civil war, resulting from the marginalization of certain people. The events in Iraq are the result of the injustice and oppression suffered by Sunni Muslims. I believe that Egypt will not reach a civil war, despite the existing conflict between different parties, such as the Brotherhood and civil parties, or even between Muslims and Christians. In the end, they are all Egyptians and they have the same reference and history. The ones who are promoting the term "civil war" in Egypt want to believe that the current Egyptian conflict is between the people themselves. However, the truth is that the conflict was and still is between the people and the authority that is robbing the citizens’ right to live with dignity and freedom.

Al-Monitor:  Do you think President Abdel Fattah al-Sisi does not believe in democracy and freedom, or does he think the current situation in Egypt does not allow their adoption?

Aboul Fotouh:  The tyrannical regime considers democracy and freedom of expression as a luxury. It believes that there are more important priorities, such as security and the economic situation. In fact, the achievement of security and stability are the excuses for repressive regimes to practice greater control over the people. I actually believe the current regime in Egypt is helping spread terrorism. Here we are in Egypt, living in a state that has been eliminating its opponents from all movements since July 3, 2013. It started with the members of the Brotherhood, and then by silencing any liberal or left-wing voice. I was not allowed to appear in both government and private media because I do not agree with the president. Despite all the restrictions, security did not prevail and the economic conditions of the country and citizens did not improve. The regime does not understand that democracy is the only way to achieve stability.

Al-Monitor:  How do you envision the next Egyptian parliament?

Aboul Fotouh:  I believe the authority in Egypt did not want to form a parliament in the first place. This explains the rush to issue laws and legislation after July 3, 2013, some of which revealed constitutional deficiencies. In December 2014, Sisi ratified the electoral district law against the will of Egyptian parties, including pro-regime parties. This law, deemed unconstitutional, led to the postponement of the parliamentary elections due to be held on March 21 and 22 [2015]. In the event that the law is amended, the next parliament will be similar to the 2010 parliament under Hosni Mubarak’s reign. I used to call it "the businessmen parliament" since all the deputies were affiliated with the authority. The elections [back then] took place while the opposition was repressed and intimidated. Therefore, as soon as the date of the 2015 parliamentary elections was announced, the Strong Egypt Party declared that it will boycott them.

Al-Monitor:  What scenarios do you expect to unfold in Egypt in the upcoming phase?

Aboul Fotouh:  We are only facing two options. First, the current regime must get back to its senses, reconsider its policies and treat Egyptians like human beings, entitled to live in freedom and dignity. This will be achieved through pressure placed by the people, movements, political parties and the nation’s honorable men. However, in the event that the authority continues to practice dictatorship, the second option will be a great revolution carried out by the Egyptians to recover their violated rights.

Energy crisis feared by Europe long a reality in Iraq 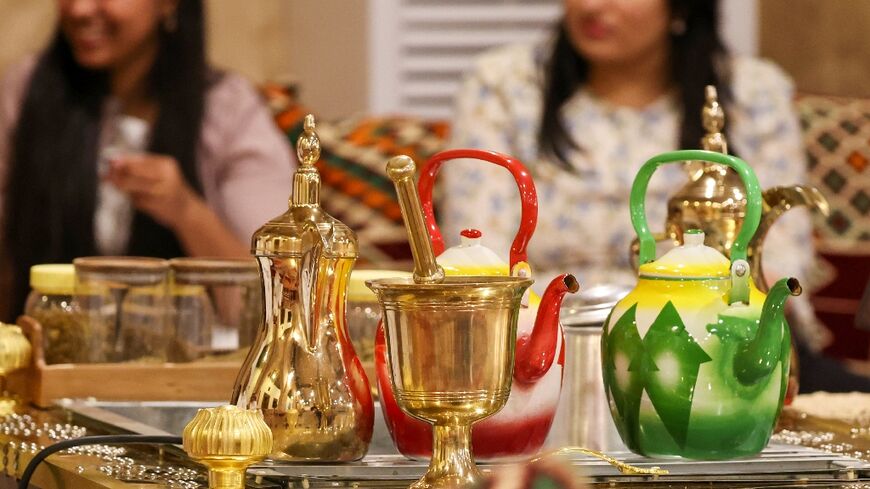