Turkey’s broadcasting review board has become a key tool in the government's efforts to police morality. 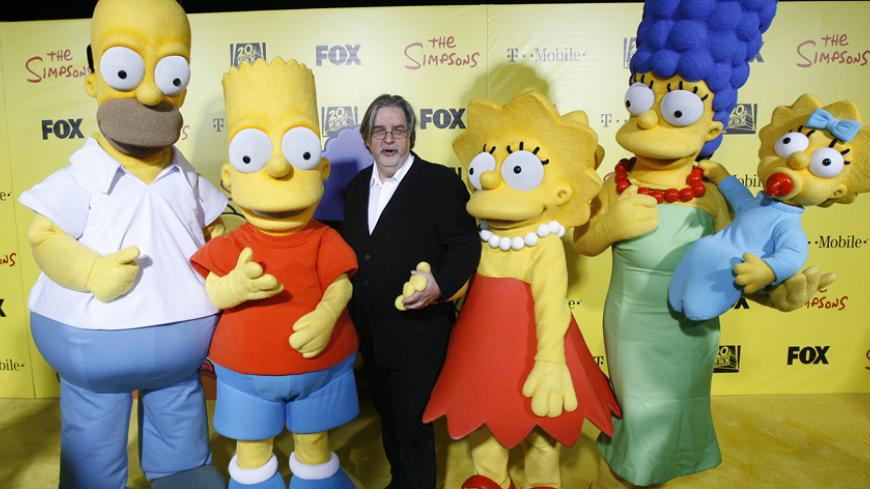 Matt Groening (C), creator of "The Simpsons," poses with characters from the show (L-R) Homer, Bart, Lisa, Marge and Maggie at the 20th anniversary party for the television series in Santa Monica, Oct. 18, 2009. - REUTERS/Mario Anzuoni

The penalties imposed by Turkey’s government-controlled broadcasting watchdog have grown increasingly overblown and bizarre in recent months, reflecting an intensified effort to impose the government’s conservative worldview on the entire nation. Targeting a wide range of media — from video clips of Rihanna and Shakira to Simpsons cartoons and kissing scenes in local soap operas — the policies of the High Board of Radio and Television (RTUK) has become a major tool in the efforts of the Justice and Development Party (AKP) to shape Turkish society.

RTUK wields two kinds of leverage: the government — the main source of the board’s power — and the sector of the Turkish viewing audience that backs its policies. The nine board members are elected by the parliament, with the AKP holding a five-seat contingent. Thanks to this composition, conservative members prevail over the decision-making. Viewers from the pious and conservative masses, which make up a majority in Turkey, are empowered to lodge complaints about shows they deem inappropriate. In 2014, some 31,000 people lodged complaints with the board, up from 15,000 in 2013. Most of those complaints pertained to “immoral” programs, and most of the RTUK sanctions penalized “immorality.”

Take, for instance, the video clip of Rihanna and Shakira’s hit “Can’t Remember to Forget You.” RTUK decided that it “featured content of a potentially harmful nature for the moral development of children and young people” because it showed the two singers half-naked in bed. Three TV stations that aired the video were fined. Another was penalized for airing DJ Calvin Harris’ clip “Summer” because it featured a female dancer who “jiggles her hips rhythmically in a way that may arouse sexual urges.” To further illustrate how the board has transformed Turkish television, private stations used to air erotic soap operas and foreign striptease shows when they made their debut in Turkey in the 1990s.

All sorts of programs have taken their share of conservative pressure, including one of Turkey’s most popular game shows, “My Spouse Knows Better,” in which married couples compete. The station airing the show was fined over an episode in which husbands danced with women not their wives, behavior that RTUK deemed contrary to “general morality.”

As all those examples illustrate, RTUK has no concrete criteria. Television stations are often arbitrarily penalized on vague grounds of breaching "morality" and "Turkish family values." In one of the most controversial cases, the board penalized an episode of "The Simpsons" for showing cigarette packs, which, it said, encouraged children and young people to smoke. But had the board really watched the episode, it would have known the penalized scene actually highlighted the harms of passive smoking. In another episode caught in RTUK's crosshairs, characters said that God does not exist. The station this time was fined for insulting religious feelings.

The Turkish audience’s attitude toward television strengthens the board’s hand in imposing penalties. Viewers take it personally when they come across a program that annoys them instead of just clicking to another station. In other memorable cases, the movie “Steam: The Turkish Bath,” which tells the story of an affair between two men, drew an angry reaction from the Association of Turkish Bath Keepers, and nurses were up in arms over a video clip that featured dancing nurses. A few years ago when he was still prime minister, President Recep Tayyip Erdogan himself slammed a soap opera about romantic intrigues in the palace of Suleiman the Magnificent, grumbling in a public speech that “we had no such ancestors” and calling on RTUK to take action.

Erdogan’s explicit appeal was not an isolated case. Each decision RTUK makes carries the mark of the conservative worldview of the AKP. The "Ask-i Memnu" (Forbidden Love) series — a big hit in Turkey and the Middle East — has not been spared. The soap opera, an adaptation of the classic Turkish novel of the same name, earned its station a “warning” for “contravening general morality” as RTUK found a kissing scene of five and a half minutes entirely too long and too passionate. A more recent kissing scene, in the “Dirty Money Love” series, also stirred the board into action. A preliminary report submitted to the board described how “two lovers kissed using the ‘lip-o-suction’ method, sucking one another’s lower and upper lips respectively” and asserted that this form of affection was immoral. RTUK has yet to give its verdict.

As a result of such restrictions, Turkish TV screens are now full of couples who don’t make love or alcoholics whose drinks are blurred out. Another character that makes frequent appearances on the screens is the scheming macho type who insults and cheats on women and even physically abuses them. It seems, however, that no complaints are filed over those characters. RTUK rulings to protect women are made rarely, if ever. And what about LGBT individuals? Forget any move in their favor; the board recently penalized a station for broadcasting “obscene” material after it aired the movie “Illegal in Blue,” which features a lesbian relationship.

RTUK member Ali Oztunc, who was elected from the main opposition’s contingent and routinely objects to the board's decisions, told Al-Monitor, “The government’s conservative mindset has taken RTUK to a point where even a Rihanna video is being penalized. They want fully conservative programming. Turkish broadcasting is taken back, while the world moves forward.”

The repercussions of RTUK's policies extend beyond their impact on the cultural fabric of Turkish society. Under this pressure, the furor over TV series have come to resemble primary school drama. Failing to attract an audience, many shows are often terminated after a few episodes. This, in turn, leaves scores of directors, scriptwriters, actors and workers jobless, threatening to finish off a large but already weakened industry. A comprehensive overhaul of RTUK is needed to save Turkish show business and rescue Turkish television from the shackles of restrictive, conservative mindsets. Board members should be selected not from party cadres but academics specializing in media, the voting procedures in decision-making should be amended to make them fairer and explicit criteria should be outlined for penalties. Yet, before anything else, the government should take its hands off the board and give up its efforts in social engineering.