Turkey's political scene is already extremely polarized; as an abundance of individual incidents of violence indicate, it is fast becoming a political powder keg. 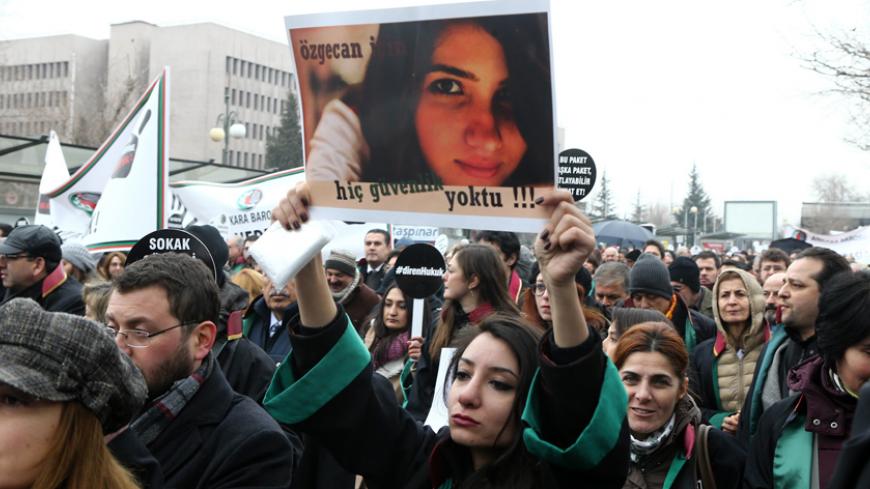 A member of Turkey's Bar Association holds a poster depicting slain Ozgecan Aslan, in Ankara, Feb. 16, 2015, during a march to protest against a law that strengthens the police's power. - ADEM ALTAN/AFP/Getty Images

About two weeks ago, a middle-aged man, hands full of bags, addressing me by name and politely asked my permission to sit beside me in the Istanbul metro. He appeared to belong to a lower-middle class segment of society. He asked me whether we could have a conversation until the next stop and without waiting my response, he began with a question: "Where are we heading to?"

"We," used in our daily Turkish conversation with political content, means Turkey, our country. Turks have a sense of collective identity in employing the word “we” as a synonym of the name of our country.

He told me that he is a retired low-level official living in one of the suburbs of Istanbul known to be a strong constituency of the ruling Justice and Development Party (AKP), where it is almost impossible to have a political conversation or being critical of the government unless one is ready to risk being subjected to physical abuse. He was careful to speak quietly.

Being an individual in Turkey in a tense public climate is getting more difficult these days. Much more difficult is being a woman, with growing trends of women subjected to sexual abuse in a society where gender discrimination is rampant. Since August 2014, 139 women have been killed.

Outrage has been simmering for some time. Following the heinous murder of freshman Ozgecan Altun, 19, of Mersin, a provincial center in the Mediterranean region south of Turkey, the whole country erupted in indignation. She was raped by a married minibus driver who picked her up when she was on the way home from her classes. Because she resisted the sexual assault, she was stabbed and killed. He burned her body and threw it in the woods, away from the highway.

Turkey is still shaking with the tremors of the event and Ozgecan’s pretty and innocent face has become an icon in millions of Turkish homes.

The initial reactions to the murder of Ozgecan from the authorities were stupefying. The minister of economy, Nihat Zeybekci, called for reinstating capital punishment, which Turkey abolished over a decade ago to comply with the EU's prerequisites for membership. The minister in charge of EU relations, a former ambassador, Volkan Bozkir, said that if his daughter had been subjected a similar assault, he would grab his revolver and punish the assailant himself. A former minister in charge of family affairs, Fatma Sahin, came up with the ingenious suggestion that the culprits of sexual crimes should be castrated.

It is unlikely that all these could be sufficient deterrents. Only a week after the savagery in Mersin, a bag was found in a garbage bin on the Asian side of Istanbul with a mutilated body of a woman. A 42-year-old woman had been cut into 17 pieces by her husband, a year older, who is allegedly schizophrenic. The incident made the headlines.

The Turkish media has no shortage of headlines on murders resulting from irrational violence. On the night of Feb. 17, Istanbul was covered with snow. In the main square on the Asian side there was a demonstration protesting the draft bill on domestic security, presented to the parliament by the government with measures giving police increased powers. Following the demonstration, a group of demonstrators on the way home were having a playful snowball fight among themselves. A snowball hit the window of a grocery shop nearby. The angry shopkeeper took a knife and attacked the group and managed to stab one of them. He was Nuh Koklu, a 46-year-old reporter who had worked for years in today’s pro-government daily Sabah. While he was carried out to the ambulance, his last words were, “My God, I hope this is only a dream.”

It was not. Rather, it turned out to be a nightmare and Nuh died. His coffin was sent to Ankara for burial.

His tragic end brought to mind one of the recent statements of President Recep Tayyip Erdogan, addressing a meeting of the association of the shopkeepers, alluding to the social unrest that may adversely affect the shopkeepers. He called on them “to be their own security forces, to be their own judges.”

The climate of violence does not solely deal with certain irresponsible statements of office-holders. The Turkish parliament itself has become a forum for violent encounters. The night the above-mentioned shopkeeper, under the excuse that his shop window had been hit by a snowball, killed a reporter in Istanbul, the Turkish parliament had a session to discuss the controversial legislation on domestic security. All of a sudden a brawl broke out when opposition deputies were protesting the conduct of the chair and they were attacked by a group of ruling party deputies.

The gavel of the chair and the bell, as well as the chairs on the rostrum, were used as weapons. Three parliament members from the main opposition party are hospitalized, one with a broken rib, and a member of parliament from the pro-Kurdish People's Democratic Party was wounded in his head. His bleeding head was on the cover pages of many Turkish dailies the next day. He came to the parliament building wearing a protective helmet.

If lawmakers fight among themselves so ferociously, it perhaps is no surprise that widespread violence is manifesting itself in different forms and for different reasons all around the country.

What is going on? Has Turkey become a sick country? A sick society?

After all, it is in a violent neighborhood. To the north in Ukraine, there is blood and fighting with Russia; to its south, violence primarily with the Islamic State and a ruthless regime in Damascus where all sorts of vicious atrocities are but routine, not to mention the continuing bloodshed in Iraq. The violence might be contagious.

Turkey is already very polarized and as an abundance of individual incidents of violence indicate, is a powder keg itself. Will the country implode further than it, effectively, already has?

This is the big question mark. And, as long as Erdogan is at the helm, the relevance of such a question will wither away.