Israeli Prime Minister Benjamin Netanyahu's acceptance of US House Speaker's invitation to speak is viewed by some as a direct affront to President Barack Obama's international domestic interests. 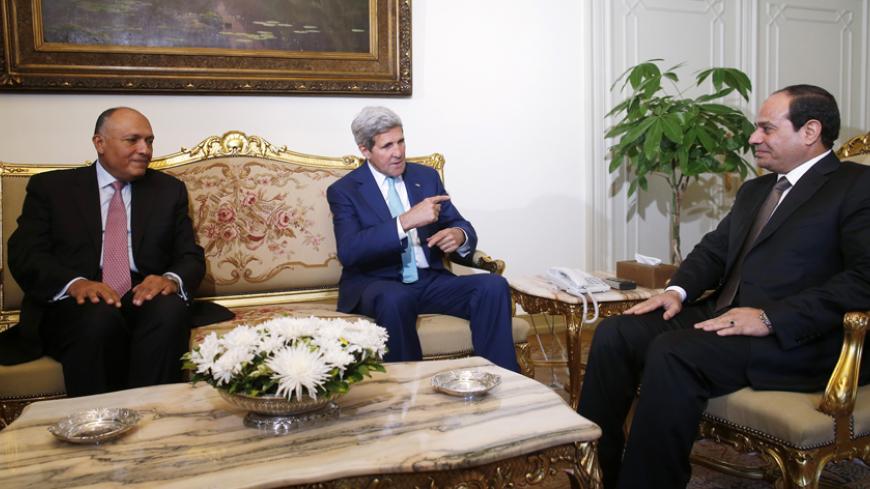 It seems that Prime Minister Benjamin Netanyahu's decision to accept the invitation of Republican Speaker of the House John Boehner to address Congress was the straw that broke the camel's back in the current Washington-Jerusalem relationship. Speaking to Al-Monitor on condition of anonymity, a senior State Department official expressed the deep dismay at all levels of the administration over Netanyahu's move, saying, "This is a direct affront to the president's international and domestic interests."

She claimed that there is no precedent in the State Department's collective memory of an Israeli prime minister siding with the president's opposition on such a central strategic issue. The source emphasized that this speech-to-be seemingly brings the Oval Office's level of mistrust of the Israeli prime minister to an all-time high. As far as this administration is concerned, should it come to any future diplomatic efforts, Netanyahu may no longer be considered a trustworthy partner, she said.

Sounding more concerned than angry, the official added that this is not just a personal or personality issue. It reflects a powerful divergence between the administration and the prime minister on the approach to diplomacy, with two main facets to this divergence.

The first facet concerns strategic cooperation at large: While the Barack Obama administration tackles international crises from an effective collective diplomacy attitude, the prime minister is prone to resolve crises by force. Such an approach makes bilateral diplomatic cooperation almost impossible, especially on key strategic issues. It poses grave obstacles in the consultations regarding the potential deal with Iran.

The second layer relates to the rift between the administration and the current Israeli government over the Palestinian issue. President Obama still believes that a realistic negotiation process with Palestinian President Mahmoud Abbas, involving the Arab League, is possible; Netanyahu is looking for Palestinian surrender.

This brings the US-Israel relationship to an almost unprecedented low point, notably in terms of the all-important personal relationship and coordination between any US president and the Israeli premier at that time. Examining past Israeli premier-US president relationships, such as those of Golda Meir and Richard Nixon; Menachem Begin and Jimmy Carter; Yitzhak Rabin, Shimon Peres and Bill Clinton; or Ehud Olmert and George W. Bush, demonstrate their constructive and irreplaceable role in bilateral ties. These relationships were also instrumental in enhancing support for Israel.

The current crisis is not threatening the very strategic axis between the United States and Israel, or the US defense aid. But it does undermine the necessary strategic coordination. US support for Israel has always been of a bipartisan nature in Congress. With Netanyahu coordinating a March 3 speech to Congress with the Republican speaker of the house against the will of a Democratic president, he is putting this bipartisan support at risk.

Yet, Obama's Washington will not give up on Israel, its defense aid or its efforts to advance peace and stability in the region. According to the State Department source, debates over a post-election peace process now revolve around both regional and international collective approaches. Washington will attempt to coordinate these policies with the leader of the next Israeli government. But if it is again Netanyahu, then a cloud of mistrust will surely overshadow such talks.

Concerning the regional approach, Washington considers the involvement of Egypt, Jordan, Saudi Arabia and the Arab League paramount to any post-election process. In that respect, the source noted that coordination with Egyptian President Gen. Abdel Fattah al-Sisi has improved and intensified. Washington intends to work with him on regional peace and security policies.

The 2002 Arab Peace Initiative, while not fully endorsed by the United States, is viewed both by the State Department and the National Security Council as a potentially constructive umbrella under which Abbas could be more forthcoming (on top of bridging a gradual Arab-Israeli normalization).

The regional approach would also play a key role in relations to security and counterterrorism, namely by collaborating with the pragmatic Arab axis against the Islamic State, Hamas and Hezbollah. Such a collaboration could serve as the backbone for a future peace process.

As for a regional mechanism, the State Department source suggested that the role of the Quartet (the United States, Russia, the European Union and the United Nations) as mediator and coordinator could be revived. And indeed, it has already resumed internal consultations about future policies. In such a scenario, given his solid relationships with Jerusalem and with Ramallah, former UK Prime Minister Tony Blair would play a leading coordinating role.

Sources in Blair's entourage told Al-Monitor that a multi-dimensional approach to resolving the current stalemate is necessary. These multidimensional efforts should include increased economic assistance for the development of the West Bank — an issue on which Blair has coordinated with US Secretary of State John Kerry. Abbas should be strengthened vis-a-vis his constituency, for him to overcome Hamas' efforts to undermine him. Reducing youth unemployment is of crucial importance in this regard.

The conduit to facilitate Israeli flexibility, according to this view, is to find the middle ground between the US proposals on security arrangements and the Israeli security establishment's demands — without infringing on future Palestinian sovereignty. On the political front, the prevailing approach among the Quartet officials is to combine a collective approach to conflict resolution with bilateral negotiations. In other words, to announce a new set of Quartet terms of reference for negotiations, with a reference to the 1967 lines as a basis for future borders.

These internal consultations will continue into the aftermath of the Israeli elections. What should be clear to the regional parties is that the international community will be proactive come spring 2015, and not heed to Israeli or Palestinian domestic policy preferences.

To the Netanyahu government, none of these plans make sense. There, the focus is on the prime minister's upcoming speech to Congress about saving Israel from Iranian threats and Western naivete, and on coordinating with John Boehner & Co.