In an interview with Al-Monitor, Bilal Khatib of the Ghajar municipal council explains the unique situation of the village; located on the Israel-Lebanon-Syria border and residents' fear of being targeted. 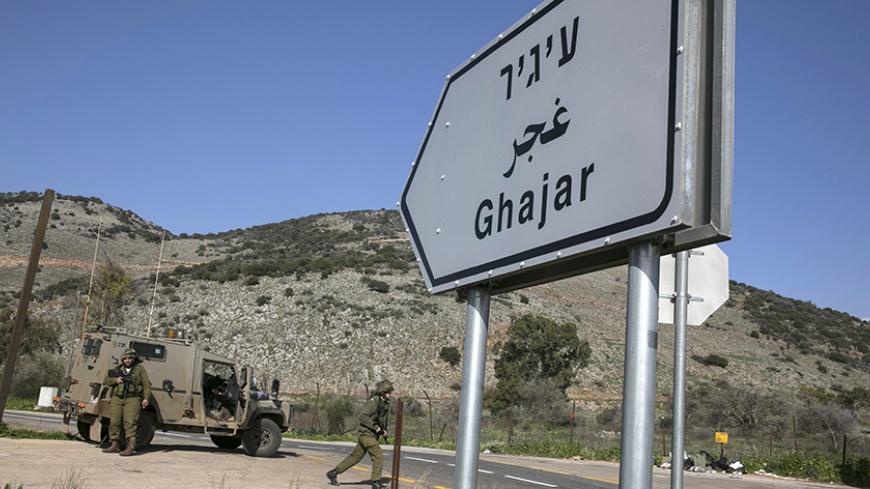 Israeli soldiers are seen next to a sign post pointing to the village of Ghajar near Israel's border with Lebanon, Jan. 28, 2015. - REUTERS/Baz Ratner

A day after the Jan. 28 Hezbollah attack on an Israel Defense Forces (IDF) convoy on Mount Dov, in which two soldiers were killed and seven injured, residents of Ghajar have yet to resume their routine. Some 2,400 people live in the small village straddling the Israel-Lebanon border, all members of the Alawite sect. Ever since the village was captured by Israel from Syria in the 1967 Six-Day War, the villagers have been defining themselves as Syrian nationals residing in Israel. In 1982, Israel designated the village a local council after annexing it under the Golan Heights Law.

Life in the village is one of perpetual, heavy concerns. Hezbollah Secretary-General Hassan Nasrallah claims Ghajar and the adjacent Shebaa Farms (Mount Dov) as occupied Lebanese territory. Ever since Israel’s withdrawal from Lebanon in May 2000 residents have been afraid that the village, or even part of it, will be handed over to Lebanon, given that UN representatives determined that the historic border runs right through the village — with part being Israeli territory and another part Lebanese.

In November 2010, the Israeli Ministerial Defense Committee adopted a proposal by the commander of UNIFIL to withdraw from the village, but the civil war in Syria and the chaos in the country halted Israel’s redeployment along the border. For their part, residents of Ghajar object to division of the village. This week, they received an additional threatening and violent reminder from Hezbollah, once again bringing the issue of Ghajar to public awareness.

The head of the local council, Ahmed Fatli, was busy this week rushing from meeting to meeting with Israeli defense officials and villagers in an effort to restore calm. In case of an escalation, he promised them that the IDF will ensure their safety and even evacuate them in an emergency. “I make sure to reassure my residents, this is now my most important task,” he said in a phone conversation before rushing off to another meeting.

“Everyone here is on edge. You can imagine what heavy pressure we’re under, especially the head of the council, who has to handle all civilian matters,” Bilal Khatib, a resident of Ghajar and an employee of the local council, told Al-Monitor.

“Today [Jan. 28], we were in a meeting and suddenly we heard a tremendous explosion,” he said, recalling the latest incident. “We went outside and saw a vehicle going up in flames in the distance. The sky above us was covered in thick smoke. We were told a house had taken a direct hit and a local team went, under fire, to check that no one was injured or trapped. Luckily, a mother and her two sons had left the house a short while before their house was hit.”

Al-Monitor:  How do you deal with the fact that Hezbollah has marked you as a target?

Khatib:  We don’t know if the shell that hit the house was [fired by] Hezbollah or the IDF, which returned fire. Everything is still under investigation.

Khatib:  All that talk about Nasrallah, Hezbollah and the disputes is way over my head. Let’s leave it aside.

Al-Monitor:  The UN has determined that part of Ghajar is Lebanese territory.

Khatib:  And we say that Israel is responsible for reaching an arrangement for us with Syria, not with Lebanon. Ghajar is a Syrian village conquered in 1967 like all the communities on the Golan [Heights]. The village was never under Lebanese control. Representatives of the UN, Terje Rød-Larsen and Staffan de Mistura visited us in the past. We showed them documents, building permits, land registration records, everything. According to maps from 1923, two-thirds of the village are located on Syrian territory and one-third on Israel’s side. In addition, in 1967 some residents who fled to Lebanon because of the war could not return when it was over and the village had been occupied. The Lebanese took them on trucks to Damascus. We hope for a peace agreement one of these days with Syria, and until then we live in peace with the Israelis.

Al-Monitor:  How does one describe your socio-economic situation compared to the other Arab communities in Israel?

Khatib:  We probably have the highest per capita number of college enrollments in the world. We have residents with undergraduate and graduate degrees and many medical doctors. We have cardiologists, specialists in internal medicine, trauma and orthopedics, dermatologists, general practitioners, dentists, as well as lawyers and education experts, and we’re talking about a village with only some 2,400 residents. The residents themselves forced the head of the council, himself an educator, to take on the job. We simply forced him, because education is at the top of our agenda.

Al-Monitor:  The data have been very surprising. How do you account for them?

Khatib:  We’re a minority trying to strengthen ourselves through education.

Khatib:  Exactly like you. This is the only way someone will hear us and listen to what we have to say.

Al-Monitor:  What did you study?

Khatib:  Accounting at Rupin College and I have a degree in auditing local authorities from Haifa University.

Al-Monitor:  Are the young village residents still going to study in Syria? Studying there is free and they give scholarships.

Khatib:  No, not now. Some went there and completed three years of study, and they’re stuck and cannot come back. Actually, parents don’t want to send their children to the dangerous areas, either.

Al-Monitor:  Who do you think will eventually win in Syria?

Khatib:  Justice. Only justice will win.

Al-Monitor:  And the Alawites will continue to be the ruling minority?

Khatib:  The Alawites in Syria are a minority that maintained calm with Israel for 40 years, until groups of terrorists showed up and things changed. Now the border is wide open. We are peace-loving people, we don’t hate anyone. We want brotherhood and unity, like brothers. People must not hate each other. Now everyone is praying for calm to be restored, for the children to go back to school, for the workers to go back to their jobs and for life to get back on track.