The US Congress must give diplomacy a real chance and not hinder nuclear negotiations with Iran. 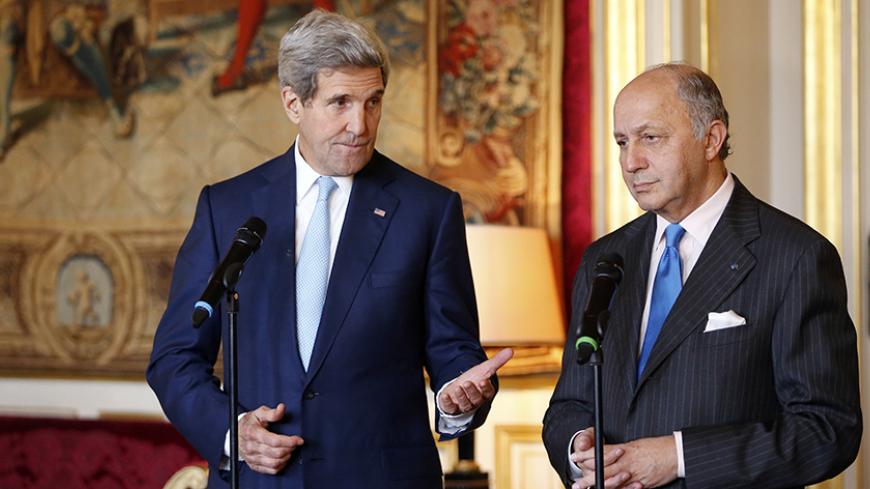 French Foreign Minister Laurent Fabius (R) and US Secretary of State John Kerry speak during a joint statement at the Quai d'Orsay Foreign Affairs Ministry in Paris, Nov. 20, 2014. Kerry was in Paris for talks with the French and Saudi foreign ministers as part of a last-minute push to secure a nuclear deal with Iran. - REUTERS/Charles Platiau

Iran and the P5+1 — the five permanent members of the UN Security Council plus Germany — failed to reach a final deal on Iran's nuclear program before the Nov. 24, 2014, deadline. However, they agreed in Vienna to a new March 2015 deadline for a political agreement and a final agreement (inclusive of annexes) by July 1. The next round of talks is scheduled for mid-January.

Informed European sources told me that the negotiators were on the verge of announcing a political agreement in Vienna, but it was blocked for apparently unknown reasons. US Secretary of State John Kerry said: "In recent weeks, we have seen new ideas surface, flexibility emerge, that could, I repeat, could help resolve some issues, that had been intractable." Interestingly enough, just a few days after the November marathon talks, Israeli Prime Minister Benjamin Netanyahu acknowledged that “Israel had a critical role in stopping a deal with Iran.”

Back in 2011, on the sidelines of a conference in Europe, a former Israeli official told an Iranian envoy — one of former President Mahmoud Ahmadinejad’s ambassadors — that in the absence of Israel’s consent, Iran would not be able to reach a deal with the world powers. The same was publicly stated by the Israeli prime minister in December 2014: "Even though Israel isn't part of the P5+1, our voice and our concerns played a critical role in preventing a bad deal."

In December 2013, Gary Samore, former adviser on the Iran nuclear issue under President Barack Obama and president of United Against Nuclear Iran, an American advocacy organization reflecting Israeli interests, told me at the Manama Dialogue in Bahrain that the most likely outcome of another six months of negotiations would be another “interim agreement,” not a final comprehensive agreement. Moreover, he predicted that a “process of rolling interim agreements” could last through the remainder of Obama’s second term.

Speaking at a December 2014 news conference alongside Netanyahu in Jerusalem, Sen. Lindsey Graham of South Carolina said: “But you, above all others, have said that sanctions are what got Iran to the table, and it will be the only thing that brings them to a deal that we can all live with. … I’m here to tell you, Mr. Prime Minister, that the Congress will follow your lead. … To those who believe the Iranians have not been trying to develop a nuclear weapon, if you come to America, you should not be allowed to drive on our highways.”

The US intelligence community has clearly stated in its National Intelligence Estimates over the past seven years that Iran has not made a decision to build a nuclear weapon. No one in Iran — and for that matter, anywhere — can stomach that a US congressional leader would so openly follow the leadership of a foreign leader, in total neglect of the stated will and wish of his own president and national security bodies. It is unfortunate that such Israel-pleasing pronouncements by senior American statesmen only serve to further buttress the prevalent Iranian mistrust — including at the level of the supreme leader — of Washington's serious interest in working out a mutually satisfactory deal with Iran.

Judging from my numerous recent exchanges with a wide range of informed, well-placed sources within the P5+1, I am confident that a comprehensive agreement is absolutely within reach, provided that the process is not torpedoed by the US Congress and Netanyahu. The good news is that Iran and the world powers already have a common understanding on the major elements of a final deal, which would assure the maximum level of transparency and the verification of the International Atomic Energy Agency on the Iranian nuclear program (all key objective guarantees related to no breakout), lift the sanctions and respect Iran’s legitimate rights on enrichment under the Non-Proliferation Treaty.

A diplomatic resolution of the nuclear issue, as underlined by Ali Shamkhani, secretary of Iran’s Supreme National Security Council, would make it possible for Tehran and Washington “not to waste their energy against each other.” Without sounding unrealistically euphoric, it could be said that a nuclear deal would, in all probability, serve as the beginning of the end to decades of tension and hostility between the two estranged countries.

Obama’s recent remarks, including on the possibility of reopening of embassies, even if far-fetched at this moment, point to the direction that has to be taken, which, under the current circumstances, might take the form of quiet collaboration on fighting Salafist extremism and terrorism in the region. Such actual cooperation, preferably without fanfare, carries the potential for further expansion to include other regional hotspots and crises. It’s not an empty claim: Iran has been — and will be — an anchor of regional stability.

A diplomatic solution to the nuclear issue — the sooner the better — will remove the threat of any future military conflagration in the Middle East, already in tumult with the ongoing ugly violence in Syria, Yemen and Iraq. An ultimate failure of the nuclear negotiations, whether torpedoed by the Israel-US Congress joint effort or other naysayers, would play in the hands of certain quarters in Iran to push for withdrawal from the Non-Proliferation Treaty — an eventuality that I presume few people would like to face after the North Korean affair.

With the stakes as high as they are, both with the nuclear dossier and the situation in the region, it is incumbent on the US Congress to act in a way to give diplomacy a real chance and regional stability a real boost. The bottom line is clear: Both sides need each other. The United States without Iran would continue to see its problems in the region remain unresolved or even aggravated, and Iran without the United States would continue to suffer in other ways.