Israel-Nigeria bilateral relations reached a peak last week, with the latter abstaining in the UN Security Council vote on the Palestinian statehood resolution. 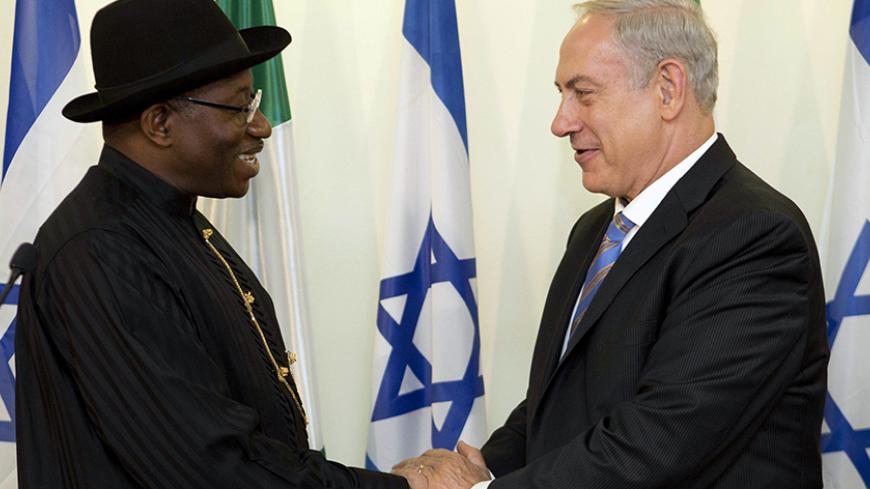 The abstention of Nigeria on Dec. 31 at the UN Security Council vote over the Palestinian statehood resolution sheds a new light on Israeli-Nigerian ties. Indeed, the two countries foster a strong relationship, but in certain aspects this relationship is still relatively young and quite surprising.

Back in the 1960s, Israel adopted a proactive African policy, trying to win over the diplomatic support of countries such as Ethiopia, Kenya and Ivory Coast. Israel was also active in Nigeria, where it began programs in the fields of agriculture, health, technology and water systems. But at that time, Nigeria was not considered by Jerusalem as a key African player. The 1973 Yom Kippur War provoked a rupture in Israeli-African relations, including Nigeria. Ties with Nigeria were renewed only in 1992, on the eve of the 1993 Oslo Accord.

On the trade front, Israel's perception of Africa at large, Nigeria in particular, has changed over the past decade, with the accent less on assistance programs and more on multilateral cooperation projects, with the participation of Israeli companies, in an attempt to boost Israeli trade and technologies.

From the political perspective, and with diplomatic isolation growing steadily, Israeli diplomacy rediscovers Africa. But this time around, the analysis of the African political forces is different, and relations with Nigeria are certainly at the forefront of Israeli diplomatic efforts.

Israeli Ambassador to the UN Ron Prosor was absent from the UN plenum at the time of the Palestinian initiative, when Nigeria, Rwanda and three other countries chose to abstain. Jerusalem explained that Prosor was taking part at the annual ambassadors' conference, deemed crucial for Israeli diplomacy at such turbulent times. But the fact that the Palestinian delegation expected an approval of their motion, and the undoubtedly pivotal importance of the vote in Israeli eyes, might suggest that the ambassador's absence was simply due to prior knowledge of the vote's result.

Indeed, an Israeli diplomatic source told Al-Monitor that the abstention of Nigeria and Rwanda came as no surprise to the ministry. The source explained that the African reluctance to support the Palestinian motion should not be attributed only to last-minute bilateral contacts at the highest levels, but be considered to a large degree as the fruit of diplomatic efforts by Israel over the past five years to restore and strengthen Israeli ties with Africa on all levels, especially with Nigeria and Rwanda.

Israeli-Nigerian ties have significantly grown ever since the election of Goodluck Jonathan to the position of president in 2010. Since his election, Jonathan came to Israel twice, with his latest visit in October 2014. This recent visit was qualified as a private pilgrimage tour to the holy land, but included a meeting with Prime Minister Benjamin Netanyahu. Following the meeting, the two men underlined the common goal of both Israel and Nigeria in fighting terrorism.

Israel has actually reached out to Nigeria this year on that issue exactly. Shortly after the kidnapping of more than 200 girls from their school in the northeastern part of the country on April 14, Netanyahu spoke by phone with the Nigerian president and offered to help. Jerusalem was not alone in offering assistance: The United States, France and Great Britain sent teams of intelligence experts to Abuja. These experts worked jointly in an effort to locate the missing girls and to identify military bases of the Boko Haram terrorist organization. But according to a French diplomatic source, the Israeli team that arrived in Abuja about the same time worked independently, communicating directly with senior elements of the Nigerian authorities.

The 10-day African tour of Foreign Minister Avigdor Liberman last June did not include Nigeria, though sources at the Foreign Ministry emphasized that this decision reflected in no way the exclusion of relations with Nigeria from the minister's agenda and priority list. On the contrary. The sources explain that the ongoing strong relations needed, according to assessments, less urgent ''encouragement'' compared with other African countries. These assessments stemmed also from existing frameworks of commercial and trade cooperation between the two countries, such as the unique trade agreement that was signed in 2009, focusing on tourism, trade and investment, and the principle agreement for direct flights between Abuja and Tel Aviv signed in 2013 during the visit of Jonathan to Israel.

Several elements play a role in this process of strengthening Israeli-Nigerian bilateral relations. Last year's economic indicators revealed that Nigeria has for the first time bypassed South Africa, the strongest African economy, in annual growth. This economic growth encouraged many Israeli companies to enter the Nigerian market, offering water treatment solutions, IT, smart agriculture, telecommunication expertise and more. On the Nigerian front, and according to Israeli official data, about 30,000 pilgrims arrived in 2012 to Israel from Nigeria, with the numbers growing constantly.

The growing wealth of Nigeria has placed international trade at the top of its national agenda. Moreover, trade in Nigeria has become an especially acute concern in view of the constant increase of its population — which has passed 170 million people, making it the seventh most-populated country in the world. Nigeria's population makeup — about half of the population Christians (50% according to a Pew survey) residing mostly in the industrial and petroleum-rich south, contrary to the Muslim sector, which lives in the poor north — favors certain political considerations. Thus, for instance, Nigeria's regional role within the Organization of Islamic Countries (OIC) might be considered by Christian politicians as secondary to issues of trade and to technology relations with the west, including with Israel.

To that, one might add that over the last two years, Christian Nigerian figures accused the OIC of supporting the Boko Haram terror organization. With elections in Nigeria due on Feb. 14, the president is hard-pressed to show tangible results in combating Boko Haram. Nigeria's ties with Israel, with its world reputation on the issue, mark at least one positive point on Jonathan's overall negative balance sheet on counterterrorism.

The upcoming elections in Nigeria might curb the rise of these bilateral relations, nurtured personally by Jonathan, a Christian. Until recently, Jonathan was considered a leading candidate for a second mandate, but is losing ground on the backdrop of increasing insecurity, corruption and widespread poverty. Another president (perhaps a Muslim) might view the relationship differently. On the Israeli side, the March 17 elections also might place at the forefront of Israeli diplomacy a less African-keen minister than Avigdor Liberman, who didn't hesitate to declare on the eve of his visit to the continent that ''Israel is back to Africa.''