Women in the health industry are looked down upon by Iraq's conservative society, but the need for nurses and for women to be employed are slowly liberalizing attitudes. 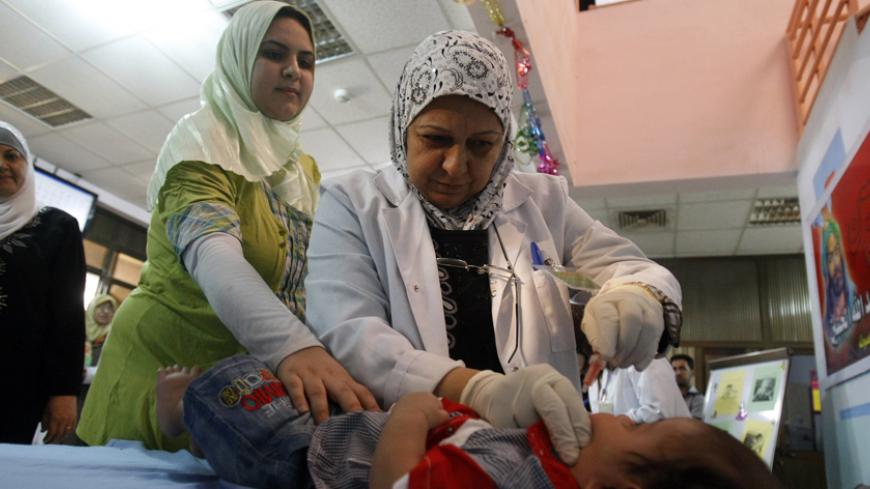 Nurses from a mobile team working for the Ministry of Health administer polio vaccinations to children under the age of five in a poor neighborhood of Baghdad, Oct. 4, 2011. - SABAH ARAR/AFP/Getty Images

Social media user Kamal Rahal expressed his wish for Iraqi nurses to “get married and have a happy life” on the "Iraq Nurse" Facebook page.

Rahal did not make this wish out of the blue. It was the automatic reaction of Iraqi society's harsh disapproval of female nurses and devaluation of their work.

Nurse Hassan Hatem, from Hilla in the center of Babil province, is looking for a woman to marry. It is only natural that he consider his colleagues at Hilla General Teaching Hospital, but, he told Al-Monitor in a Jan. 4 interview, “I was not able to marry a colleague who I used to love because my family refused our marriage.” He added, “I sought to persuade my father of the marriage but he categorically refused the idea of letting me marry a female nurse.”

Hatem attributed his father’s refusal to the fact that society still considers a woman who works as a nurse to be rebelling against moral values and the social customs that prohibit women from staying overnight outside the household or to have physical contact with men, even patients. This conservative social idea holds that a woman's work place is in the home, and Iraq's culture of shame classifies women as "weak" individuals who must be kept isolated. The reluctance of many Iraqi women to work despite widespread unemployment, especially among women, is causing a shortage in Iraqi hospitals and prompting the Iraqi Ministry of Health to recruit nurses from India.

Nursing was introduced in Iraq in 1933 and according to the Iraqi Ministry of Health records, there are currently no more than 40,000 Iraqi nurses, 75% of them men.

Rahima Hussein, also from Babil, has been working as a nurse since 1979. She told Al-Monitor that her job is one of the reasons she never got married. Hussein stressed that many of her colleagues stopped working due to the narrow societal view of the profession, saying, “Several became midwives working in houses.”

However, journalist Qasim Mozan, the editor of the society column in the Iraqi newspaper Al-Sabaah and a frequent investigator of social issues, told Al-Monitor, “Ever since women started working in this humanitarian profession, they have been looked down on and their honor has been questioned. Even their parents were criticized and described in demeaning terms.”

Mozan added, “The perception of women as inferior is old. After 2003, when Iraqi President Saddam Hussein's regime fell, the conservative movement dominated and strengthened the previous popular skepticism, thus discouraging Iraqis from working in the nursing profession. This led the Ministry of Health to recruit nurses from Asian countries to fill the shortage in medical staff.”

Anaam al-Zaidi, who has been working as a nurse in Al-Hussein Teaching Hospital in Dhi Qar for five years, is optimistic about the future of female nurses. She told Al-Monitor, “The perception of inferiority is gradually receding in society,” explaining, “This is due to the social openness to the world, the media and Iraqis traveling abroad to receive treatment.”

She added, “Families are encouraged to allow women to work in the health sector, given the tempting salary. Women receive around 500,000 Iraqi dinars [$437] upon their employment, and this salary increases with years of service.” Zaidi pointed out that nearly two decades ago, it was not common to see even the current number of female nurses in Iraqi hospitals, but over the last five years, women have been increasingly willing to work in this sector.

Zaidi’s opinion is in line with that of journalist Alaa Koliy. In an interview with Al-Monitor, Koliy said, “A lot of people are starting to understand the role of female nurses and how their work requires some activities that seem strange in a conservative society, such as touching men and staying overnight in the hospital.”

Koliy asserted, “The situation has changed and there is an improvement in the relationship between society and the female nurse, given the need for job opportunities and the spread of education and openness to other cultures.”

For his part, social researcher Sabah Kadhim points out the contradiction between the rejection of the nursing profession and society’s need for it. He told Al-Monitor, “The security situation, leading to casualties from war and terrorist attacks, calls for the qualification of medical and paramedical staff and for the development of the nursing sector to meet treatment needs.”

In the city of Diwaniya, medical assistant Alaa Najem told Al-Monitor, “Around 25 Indian nurses work in Iraq for a salary of about $500 to $600, which is less than the salary received by Iraqi nurses, which contributed to the improvement of health services in Diwaniya's hospital and health centers.”

Iraqi nurse Lamia Saleh told Al-Monitor that working with Indian nurses has increased her competence, stressing, “Nurses recruited from abroad have a high professionalism and extensive experience.” For her part, Indian nurse Kerala Mathu said that Iraqi nurses are eager to work, but lack expertise and need more qualifications.