US officials' united show of support for slain journalists hides bipartisan ambivalence over Western governments' role in standing up for unpopular speech. 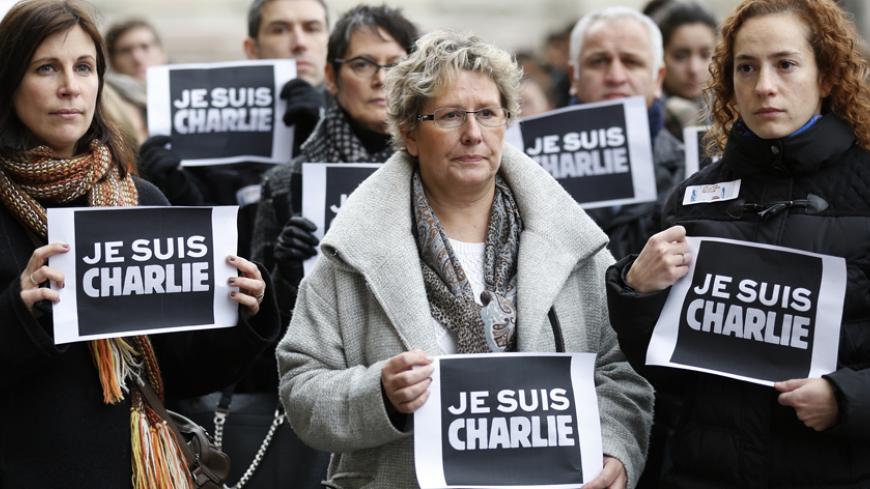 People holds placards reading "I am Charlie" during a minute of silence in Strasbourg Jan. 8, 2015, for victims of the shooting at the Paris offices of weekly satirical newspaper Charlie Hebdo. - REUTERS/Vincent Kessler

Those are some of the words US officials of both parties have used in the past to describe Charlie Hebdo and others that have taken aim at Muslims and their prophet over the past decade.

After Wednesday's deadly attack on the French satirical weekly, the slain French cartoonists have been eulogized as “martyrs for liberty” on both sides of the Atlantic. But the sudden change of tone masks a deeper ambivalence in both Europe and the United States over the proper role of Western governments in standing up for freedom of expression when it takes aim at religion — in particular Islam, which forbids representations of Muhammad.

“Free expression and a free press are core values; they are universal values, principles that can be attacked but never eradicated, because brave and decent people around the world will never give in to the intimidation and the terror that those seeking to destroy those values employ,” Secretary of State John Kerry vowed in a statement Wednesday. “I agree with the French imam [Hassen Chalghoumi of Drancy], who today called the slain journalists 'martyrs for liberty.' Today’s murders are part of a larger confrontation, not between civilizations — no — but between civilization itself and those who are opposed to a civilized world.”

President Barack Obama, for his part, promised that the “universal belief in the freedom of expression … can't be silenced because of the senseless violence of the few.”

“We know that these images will be deeply offensive to many and have the potential to be inflammatory,” Carney said at the time. “In other words, we don’t question the right of something like this to be published; we just question the judgment behind the decision to publish it.”

“To us, to me personally, this video is disgusting and reprehensible,” Clinton said at the time. “It appears to have a deeply cynical purpose: to denigrate a great religion and to provoke rage. But as I said yesterday, there is no justification, none at all, for responding to this video with violence.”

Asked on Wednesday if the US government believed in “red lines” regarding the publication of provocative material, State Department spokeswoman Jen Psaki said the agency's past stance — criticizing hateful speech while defending the right to express it — hasn't changed.

“Nothing justifies violence,” Psaki said. “You know our view on freedom of speech and freedom of the press, and we believe that that’s something that should be universal around the world. There have been occasions in the past over history where we have expressed concerns not about the legality, but about information that’s been shared.”

Conservative media outlets such as CNS News lost no time on Wednesday jumping on such statements to accuse Democrats of hypocrisy. Others quickly piled on.

“Shame on anyone who looks at these events and says we should have been more sensitive, or that we must limit what we say about Islam or those who profess to follow its teachings,” Move America Forward, a conservative national security organization said in a statement.

That narrow partisan lens, however, fails to take into account both parties' reluctance to stand up for provocative speech that could imperil US service members and diplomats stationed across the globe.
After Denmark's Jyllands-Posten and Charlie Hebdo published cartoons of the Prophet Muhammad in 2006, the George W. Bush administration slammed the decision as “unacceptable.”

“We find them offensive, and we certainly understand why Muslims would find these images offensive," State Department spokesman Sean McCormack said at the time. “Anti-Muslim images are as unacceptable as anti-Semitic images, as anti-Christian images, or any other religious belief.”

The issue made a brief appearance in the 2012 presidential campaign. Early on, Republican candidate Mitt Romney attacked Clinton and the US Embassy in Cairo for denouncing “Innocence of Muslims.”

“The Obama administration's first response was not to condemn attacks on our diplomatic missions, but to sympathize with those who waged the attacks,” Romney said in a statement hours after protesters breached the US Embassy in Cairo.

Romney quickly backtracked, however, telling ABC News days later that a Florida pastor who promoted the movie was “disrespectful to people of other faiths.” The shift came after Joint Chiefs of Staff Chairman Martin Dempsey personally called the pastor, Terry Jones, to ask him to withdraw his support for a movie that the Pentagon feared could endanger the lives of US troops in Afghanistan and other Muslim countries.

“I think people should have the common courtesy and judgment — the good judgment — not to offend other peoples’ faiths,” Romney told ABC News. “It’s a very bad thing, I think, this guy’s doing.”

Lawmakers of both parties expressed similar ambivalence on Wednesday. While all condemned the attack and defended Charlie Hebdo's right to publish whatever it wants, they disagreed on their own role in standing up for unpopular opinions.

“I think the American government needs to condemn attacks on anyone's religion,” Sen. Lindsey Graham, R-S.C., told Al-Monitor. “But at the end of the day, to suggest that the people of France brought them upon themselves would be ludicrous.”

Rep. Gerry Connolly, D-Va., said immigrants need to accept Western countries' position on freedom of expression. But he said politicians also have a role to play in defusing religious tensions. “I think showing respect and helping to raise awareness about the need for that respect, absolutely that's a role I play,” he said. “My role isn't to incite, I don't think. Some politicians may want to do that.”

“Artists and journalists should push the envelop. Everything is on the table — religion included,” said Rep. Ileana Ros-Lehtinen, R-Fla., the chairwoman of the House Foreign Affairs panel on the Middle East. “Why shouldn't religion be the subject of merriment and ridicule? We all are. That's freedom. If you're just going to be free to do what is accepted, that's not freedom.”

“It's the fundamentals of democracy,” he told Al-Monitor. “You guys [in the US media] say something every day that I don't like. Should I now decide that you're inciting my constituents? That is a slippery slope if we now decide that someone better curb their opinions because it's going to incite violence.”

That debate is also happening in France.

In the past, French officials from former President Jacques Chirac to Foreign Minister Laurent Fabius have accused Charlie Hebdo of pouring oil on the fire of religious tensions. On Wednesday, the French — Muslims and non-Muslims alike — were united in defense of freedom of expression, but deep-seated tensions over the issue continued to simmer under the surface.

“This barbaric act is also an attack against democracy and freedom of the press,” read a statement from Dalil Boubakeur of the Great Mosque of Paris, which unsuccessfully sued Charlie Hebdo in 2006 for printing the cartoons it deemed racist. “In an international political context of tensions fueled by the delusions of terrorist groups unjustly claiming to represent Islam, we call on those attached to the values of the French Republic and of democracy to avoid all provocations that serve only to feed the fire.”