While the Obama administration is reluctant to finalize its peace negotiations policy before Israeli elections, the European Union has already elaborated punitive measures in response to any future Israeli settlements. 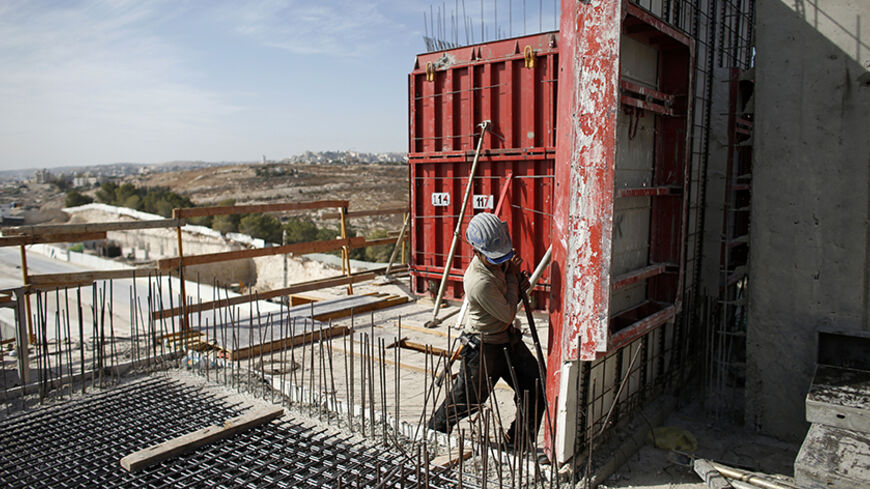 A laborer works on an apartment building under construction in a Jewish settlement known to Israelis as Har Homa and to Palestinians as Jabal Abu Ghneim in an area of the West Bank that Israel captured in 1967 and annexed to the city of Jerusalem, Oct. 28, 2014. - REUTERS/Ronen Zvulun

Speaking on condition of anonymity, a senior source in the Brussels European Union foreign policy team has shared with Al-Monitor their thinking over resuming the peace process once the next Israeli government is established: "Watching the Israeli election campaign, we are dismayed by the fact that all the parties seem to ignore the central issue concerning Israel's future — as we see it — namely, resolving the conflict with the Palestinians. Come May, Europe will not be able to ignore this anymore. We have on our hands a major strategic challenge in relation to the Arab and Muslim world. We are engaged in a fight against terror, both domestically and in the Middle East. And in this context, resolving the Palestinian predicament is of pivotal importance."

The source outlined the European alternatives as of spring 2015. It seems that several senior officials in EU capitals favor a policy initiative that would include a UN Security Council resolution calling to resume negotiations, with "flexible language" as to the outcome of those negotiations. This flexible language would allow Europe to convince the United States not to cast a veto over the resolution. The EU source was most adamant on one issue: "The European Union will do its utmost to prevent the type of settlement expansion that characterized the previous Israeli government." She even stipulated that a settlement freeze may very well be part of this Security Council resolution.

In Washington, a State Department source aware of the European thinking told Al-Monitor that, while the administration coordinates with the EU, the United States will not decide on its policy until after the Israeli elections. According to this source, whatever the scenario, the United States will make an effective effort to renew peace talks between the next Israeli government and Palestinian President Mahmoud Abbas. Nevertheless, the governments across the ocean see eye-to-eye on one issue: the need to freeze construction at the very least in settlements outside the settlement blocs. The Barack Obama administration, she said, considers the cooperation with the pragmatic Arab countries — Egypt, Jordan and Saudi Arabia — as a strategic need: "The fight against terror and the issue of Palestinian statehood go hand in hand."

Despite US reluctance, it seems that the Europeans at this point are more adamant than ever on coordinating policies on the Palestinian issue. The Brussels source raised the eventuality by which the next Israeli government would reject international peace initiatives and continue settlement expansion. In that case, the main EU member states, except for Germany and the Netherlands, will not hold back on punitive measures in response.

Some EU officials are even considering demanding Israel to compensate damages to EU projects located beyond the Green Line — damages caused by settlement expansion. In the words of the Brussels EU official: "If Israeli settlement policy continues to sabotage the two-state solution, some EU members even foresee sanctions against Israel all together. Yet it is in Israel's hands to prevent it."

When asked about these European positions, the US State Department source said that the United States is now urging the Europeans to refrain from such punitive measures. Yet, she claimed that after the election, if the settlement policy continues, it will be virtually impossible to block the Europeans (Paris and London in particular) from initiating such policies. The United States, she emphasized, will categorically impress upon the next Israeli government, irrespective of who heads it, that continued settlement expansion could have devastating consequences.

Within the Israeli government, these are considered empty threats. Prime Minister Benjamin Netanyahu is already coordinating with Economy and Trade Minister Naftali Bennett the continuation of settlement expansion, in case of Netanyahu's anticipated victory. In the outgoing government, Netanyahu has created a system of appropriating vast funds for settlement construction, in an almost clandestine way, through the Finance Committee of the Knesset. This was exposed and objected to by Labor Knesset member Stav Shaffir. On the issue of settlements, Netanyahu believes that he can fool "all of the people all of the time." It seems that the international community is determined to put an end to these practices. But even if President Obama and the EU object loudly, there is always the Republican Congress.