A new report on arms-producing companies offers insight into the Middle East, where military experts say the armament race is likely to continue at an increasing pace. 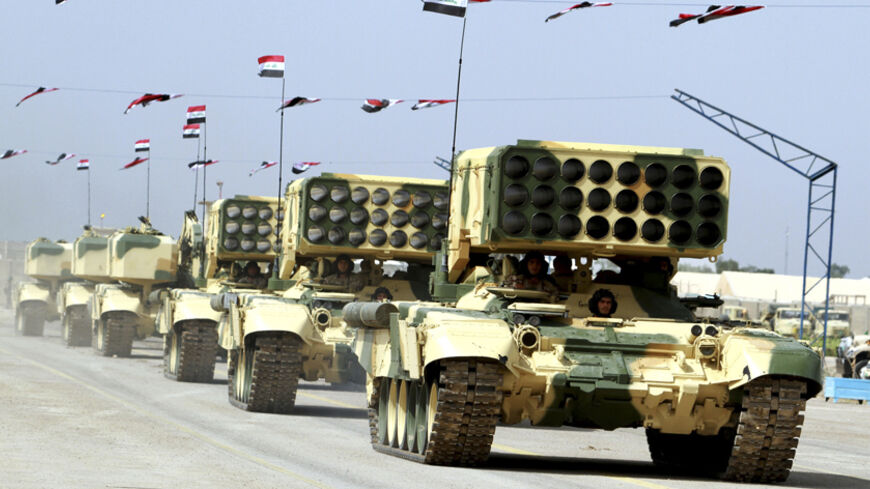 Iraqi soldiers ride in tanks with Russian rocket launchers as part of a parade marking the founding anniversary of the army's artillery section in Baghdad, Oct. 1, 2014.

On Dec. 15, the Stockholm International Peace Research Institute (SIPRI) released its report, “The SIPRI Top 100 Arms-Producing and Military Services Companies, 2013.” In addition to valuable data on global arms and military services sales, the report also offers interesting insight into the Middle East. At a glance, here are some of the facts:

The 2013 revenues of the 100 largest arms and military services companies totaled $402 billion. The primary customers of these companies were their own armies. The report, which does not cover China because of a lack of transparent data, notes that the decline in global arms sales that started in 2011 is continuing and the reductions in the US defense budget have played a prominent role in the trend.

In 2013, compared with 2011 and 2012, the global arms sales share of US and European companies registered a 5% decline. Despite this drop, 38 US and 21 Western European companies that were in the Top 100 list still realized 84.2% of global arms and military services sales. According to a projection by the British Defense Ministry, this pattern is not likely to change until 2045, as Brazil, Russia, India and China continue to expand their defense budgets.

Another interesting point is the ascent of 10 Russian companies to the Top 100 list and their $31 billion in sales, a 20% increase from the past year. The company that made the most sales, by a 118% increase compared with a year ago, is the Russian Tactical Missiles Corporation, No. 46 in the rankings. Experts say this increase is mainly due to Russian’s increasing spending on armaments in recent years. But it must be noted that the Russian companies may suffer losses in their weapons sales in 2014 because of US and European sanctions, the decrease in crude oil prices and the Ukrainian crisis.

For many years, SIPRI has classified the leading arms manufacturers in categories such as North American, European and Russian. This year, however, it introduced a new category: "emerging producers." For the first time, the report notes that India, Brazil, Singapore, South Korea and Turkey have shares in the global arms markets (3.6% of the total arms sales of the Top 100). Audi Fleurant, the director of the SIPRI Arms and Military Expenditures Program, says these companies have entered the Top 100 because of the decisions of their countries to increase the share of domestic production of armaments.

According to Fleurant, the lion’s share of the global arms sales belongs to the companies that produce war planes, missile systems, armored vehicles and warships, and side industries that manufacture components for those companies. Companies that offer training, logistics support, maintenance and technical services, as expected, rank lower.

Three Israeli companies and one Turkish corporation made the list. Israel’s Elbit Systems (35th), Israel Aerospace Industries (38th) and Rafael (51st) have total revenues of $7.5 billion. Turkey’s Aselsan had revenues of $1.1 billion. There is no other Middle Eastern country on the list.

What do these numbers mean for the Middle East? The answer can be found in another SIPRI report. According to its "Recent Trends in World Military Expenditure," Middle Eastern countries, including Turkey, spent about $170 billion on defense in 2013.

According to the defense and security experts of Jane’s Aerospace, until 2020, the defense market volume in the Middle East will be around $820 billion.

According to the list of highest defense spenders in 2013, Saudi Arabia ranked fourth with $67 billion. Turkey was 14th with $19.1 billion, and the United Arab Emirates 15th with $19 billion. Saudi Arabia, Oman and Bahrain doubled their defense expenditures between 2004 and 2014. The only country that increased its spending three times was Iraq. It should be noted, however, that because of a lack of transparency in their defense expenditures, Iran, Qatar, Syria and Yemen were not included in the report.

Military experts feel the armament race in the Middle East is likely to continue at an increasing pace. Although the decline in oil prices could negatively affect their defense expenditures, many Middle Eastern countries, led by the Gulf Cooperation Council states, could recoup lost oil revenues by shifting their budget surpluses to defense expenses.

The increasing Islamic State threat in the region, sharpening Shiite-Sunni rivalry, internal political turmoil and terrorism are also contributing to the increase in defense expenditures. Iran and Iraq appear to be the countries whose defense budgets will be most affected by the drop in oil prices.

What are the favorite weapons systems sought by Middle Eastern countries? Far ahead on the list are ballistic anti-missile systems and a new generation of warplanes. Also at the top of the list are military electronics and cyber systems, helicopters for special forces teams and light tactical armored vehicles with weapons systems. GBU-35 bunker-buster ammunition to be used against concrete-protected nuclear facilities and guided air-to-air and air-to-ground missiles are also popular.

Defense exhibits are being arranged in the region's major cities, where multimillion dollar contracts are signed. The defense exhibits and fairs season will open soon, with IDEX-2015 in Abu Dhabi scheduled for February.

Will the billions of dollars in regional defense budgets bring peace, calm and stability to Middle East? One can hope that the trend for increasing armaments will not create a security dilemma. Given the delicacy of negotiating on such crucial issues, it is not an exaggeration to say that military decision-makers will not find it easy to keep the arms race under control.