There are stark differences between the French and Arab UN Security Council draft resolutions on Palestine. 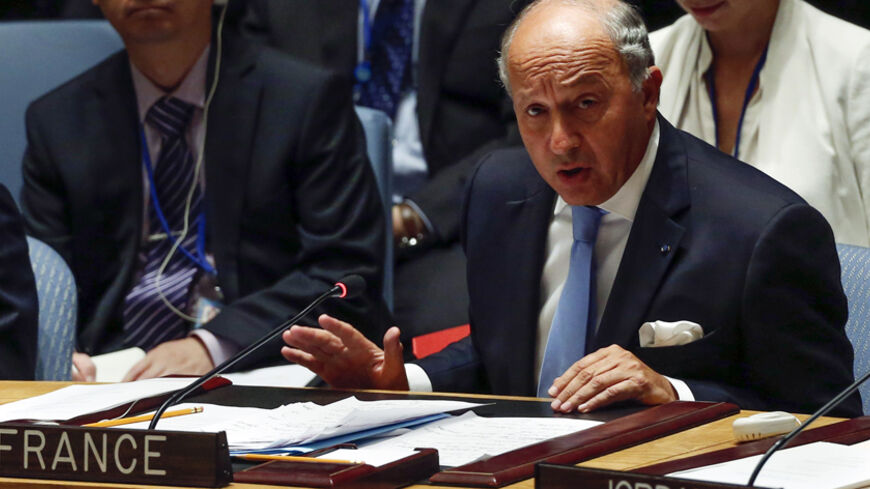 Two resolutions that on the surface appear similar have been presented to the UN Security Council on Palestinian statehood. Dina Kawar, Jordan’s UN representative, on Dec. 17 presented the Palestinian draft backed by the Arab League, while France presented what seems to be a European counter version, which has the tacit agreement of Washington. The Jordanian version will be the main focus of the discussions that will most probably begin after the Christmas and New Year’s holiday.

While in some ways the two versions are similar, a few clear differences are evident both in content and in operational language. In the preamble of the two drafts, five differences stand out.

Both drafts reaffirm the 1947 General Assembly Partition Plan, but the French version published by the Montreal-based Center for Research on Globalization clearly hints at Israeli Prime Minister Benjamin Netanyahu’s demand that Palestinians recognize Israel as a Jewish state. The French version added to the clause a line saying that the 1947 resolution recommendation on the question of Palestine was for the establishment of “the independence of the Arab and Jewish States.” In the paragraph on Gaza of the preamble, both versions call for a “sustainable solution to the situation in the Gaza Strip.” However, the French omitted the word "Palestinian" from the segment about the origins of Gaza, while the Jordanian version states that “the Gaza Strip constitutes an integral part of the Palestinian territory occupied in 1967.” The French also dropped the term "internationally" when reaffirming the rights of all states in the region to “live in peace within secure and internationally recognized borders.” And while the Arab version praised the United States for its efforts in 2013-14 to “facilitate and advance negotiations between the parties aimed at achieving a final peace settlement, the French version drops the word "peace," stating simply that the US aim was to “take forward negotiations aimed at final settlement.”

While the variations in the preamble are important, major differences occurred in the operating section of the two drafts. The Jordanian version suggests “no later than 12 months” of negotiations, while the French version doubles the period to 24 months.

In regard to settlements, the French appear to have a hard time accepting any reference to the “unilateral and illegal” Israeli settlement activities in the occupied territories. In the relevant Arab paragraph, the draft says that the UN Security Council calls on both parties to “abstain from any unilateral and illegal actions including settlement activities,” but the French simply rephrased the clause to state that the Security Council “urges both parties to engage seriously in the work of building trust and act together in the pursuit of peace.”

On the issue of Palestinian refugees, clear differences emerge. The draft presented by Jordan talks about a “just and agreed solution to the Palestine refugee question on the basis of the Arab Peace Initiative, international law and relevant United Nations resolutions, including resolution 194 (III).” The French added the term of a “fair and realistic” solution to the refugee question and dropped the Arab Peace Initiative, international law, relevant UN resolutions and Resolution 194 from their version.

The French did not include the Arab clause calling on “all parties to abide by their obligations under international humanitarian law, including the Geneva Convention relative to the Protection of Civilian Persons in Time of War of 12 August 1949.”

Also absent in the French draft is a detailed clause about the need to “redress the unsustainable situation” in the Gaza Strip through expanding the efforts of the United Nations Relief and Works Agency for Palestine Refugees in the Near East.

Failing to reach any common language behind the scenes, the French have clearly revealed the failure of the international community to take seriously the effort to end settlements and occupation. The vote in the French and European parliaments for Palestinian statehood, notwithstanding, the insistence of France to submit a different version rather than make changes to the Palestinian/Arab version is a sign that Paris is not serious about the pursuit of peace through binding forums such as the UN Security Council.

Until the last moment, some of the Arab states were advising Palestinians to wait before submitting their blue version for a vote at the Security Council. While UN sources denied a Jerusalem Post article that Kawar was “practically pushed” to submit the Palestinian draft in blue, it is clear that Jordan and other Arab states would have preferred to wait until an agreed-upon version would be formulated. The UN source told Al-Monitor that despite initial hesitation aimed at reaching international agreement, Jordan accepted the Arab consensus and submitted the Palestinian draft in blue to the UN Security Council.