The government’s task of reducing the deficit and turning the Egyptian economy around has grown more difficult with the predicted decline in Gulf aid. 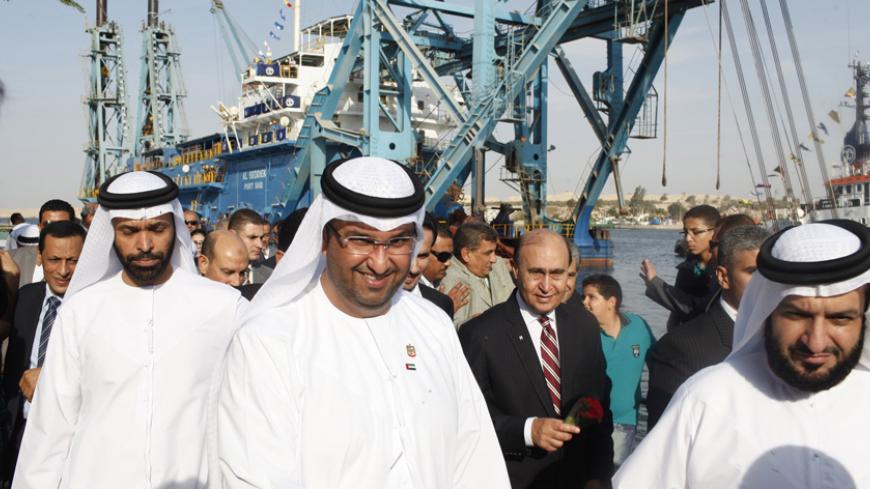 The regime of President Abdel Fattah al-Sisi is trying to unravel the economic crisis that has gripped Egypt since the overthrow of former President Mohammed Morsi in June 2013. Complicating matters, aid from the Gulf states has become less reliable than many had hoped.

It started with the Kingdom of Saudi Arabia, which announced an aid package as soon as Morsi was isolated on July 3, 2013. The Saudis offered Egypt $5 billion divided between a bank deposit of $2 billion, large quantities of oil products worth $2 billion and $1 billion in cash.

Abu Dhabi soon joined in, making a $1 billion grant, a deposit worth $2 billion and $4.9 billion to start a service project. Kuwait came in third, with aid amounting to $4 billion.

Prior to Sisi's election, aid was managed by the government of interim Prime Minister Hazem Beblawi. Politicians and economic analysts had expected the aid to continue for a long time. This expectation was clear in a Bank of America report, which read that the total Gulf pledge to Egypt amounted to $20.8 billion during the last fiscal year. However, Cairo received no more than $18 billion. The report also predicted that Gulf support would increase following the presidential elections to help stabilize the Egyptian economy, stating that during the fiscal year (2014-2015) Egypt needs $12 billion to preserve its foreign exchange reserves at the central bank.

Did the Gulf stop aid to Egypt?

"The financial support from the Gulf for Egypt did not stop, but aid decreased substantially," Omar al-Shaniti, the executive director of the Multi Plus investment group, told Al-Monitor. "This aid was primarily for political reasons. Back then, the Gulf States, except Qatar, provided aid for Egypt to get rid of the regime of the Muslim Brotherhood. However, Riyadh, Abu Dhabi and Kuwait did not make any grants during Morsi's time in office. In fact, it was clear that the funds would have not continued to flow in Cairo."

Amr Adly, a non-resident scholar at the Carnegie Middle East Center, told Al-Monitor, "The decrease in aid has been reflected in two phenomena: a lack of funds provided to Egypt and unfulfilled promises of support." He said that funding states cannot guarantee the proper channeling of the grants they make.

In March, for instance, the UAE announced that it would build 1 million housing units in Egypt as part of a $40 billion project it has yet to initiate.

The decline in aid from the Gulf did not come as a surprise to Cairo, as the UAE has openly stated. Minister of Foreign Affairs Mansour Bin Zayed Al Nahayan said in October 2013, "The Arab support for Egypt will not last long." Egypt, however, failed to tighten its belt and reduce the deficit.

"Beblawi's government was supposed to continue with the austerity plan to control the deficit, but it did not," Shaniti said. "The generous Gulf aid contributed to the government's expansionary policy, raising government spending so that citizens would feel economic improvement."

For its part, the UAE assigned the French Lazard Bank, which specializes in providing consulting and effective solutions to financial problems, to report on Egypt's financing needs and major economic problems. Lazard's report concluded that Egypt needed $30 billion a year for four years. In fact, $15 billion was needed to bridge the financing gap for the Central Bank and preserve a safe level of foreign exchange reserves covering three months' worth of imports. Another $15 billion in investments was needed to achieve an average growth rate of 5% over the next four years.

Shaniti said that following Sisi's taking power, everyone, including Sisi, anticipated significant aid from the Gulf states, which would fund giant national projects. Indeed, giant projects have begun, such as the new Suez channel. Nevertheless, the expected billions from the Gulf did not flow and the government had to resort to domestic financing. The government of Prime Minister Ibrahim Mahlab raised energy prices during the first stages of the austerity plan in July.

Immediately after the announcement of Sisi's victory, Saudi Arabia called for a conference of donors to help Egypt overcome its economic crisis. Saudi King Abdullah bin Abdulaziz demanded that the state extend a helping hand to Egypt, saying, "Egypt is in dire need from us to be able to get out of the tunnel of the unknown."

According to a government statement, the donors conference aims to finance projects exceeding $60 billion.

However, there are some steps the Egyptian government should take alleviate the situation and find other sources of money. Economists have differing opinions about the impact of the decline in oil prices on the Gulf support of Egypt's projects. According to Shaniti, the oil crisis will adversely affect the Gulf states and thus the investment projects they contribute to. According to Adly, it is too soon to talk about the repercussions of the oil crisis on Egypt's economy. In his opinion, the Gulf states' capital surpluses are too large (between $2 and $3 trillion) to be affected by the decline in oil prices.

According to Shaniti, "The Egyptian government ought to renege on launching the giant national projects that would dry up liquidity from the market but generate long-term returns. This would be the essential step on the road out of the economic crisis weighing heavily on the state."

He urged officials to expedite the agreement with the International Monetary Fund to obtain the financing and hard currency to defend the Egyptian pound and gain international confidence. The government also ought to realize that tourism and foreign investments depend on security stability, all factors to consider when revising the local management strategy.