No chance Turkey will be 'kicked out of NATO'

Turkey’s importance for the alliance remains despite differences while a former ambassador says NATO has no rules for “kicking anyone out.” 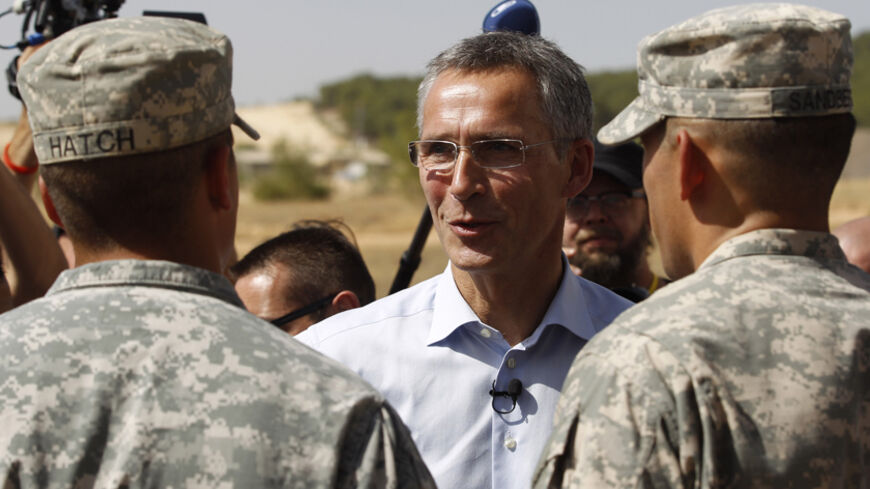 NATO Secretary-General Jens Stoltenberg of Norway meets with US soldiers during his visit to view the US Patriot missile system at a Turkish military base in Gaziantep, Turkey, Oct. 10, 2014. - REUTERS/Osman Orsal

The US-led fight against the Islamic State (IS), and in particular the battle for Kobani, the predominantly Kurdish town in northern Syria that is shouting distance from the Turkish border, has turned into a “stress test” for Turkey’s NATO membership, if one is to go by some Western opinion-makers.

These opinion-makers continue to push the theme that Ankara is not doing its share in fighting IS, if not aiding and abetting IS against the Kurds, and should therefore be given notice that its value as a member of the Western alliance is rapidly diminishing.

French philosopher-writer Bernard-Henri Levy is just one of the prominent Westerners who lent his weight to this view recently in a piece he penned for the New Republic on Oct. 12.

In his piece titled "Shame on Turkey for Choosing the Islamic State over the Kurds," Levy maintained that the battle against IS was “the moment of truth, the now or never, for the (NATO) alliance and the system of collective security that was established in the region in the aftermath of the Second World War.”

Levy went on to argue that Turkey — a NATO member since 1952 — had joined in operations to support the civilian population of northern Iraq in 1991 only reluctantly. He also recalled that the Turkish parliament, in March 2003, had voted against allowing US forces to pass through to Iraq.

“If Turkey stands down a third time — if Kobani becomes the name of yet another Turkish default, this one inexcusable — its future in NATO is in doubt,” Levy said.

One could of course question Levy’s intellectual honesty here since Turkey did come through in 1991 and played a crucial role in protecting northern Iraq Kurds against Saddam Hussein. If Kurdish northern Iraq is what it is today, it's hard to deny the Turkish contribution.

As for the US invasion of Iraq in 2003, Turkey was not the only NATO member that refused to be part of President George W. Bush's “coalition of the willing.”

These points, nevertheless, appear moot given that the view expressed by Levy is spreading in the West.

Writing in the National Review Online on Oct. 30, historian Conrad Black also maintained that the time has come to consider whether Turkey should be retained as a NATO member. Arguing that Turkey, in its opposition to the Assad regime, has effectively supported IS by tolerating the dispatch of some supplies to it and denying the United States and its allies the use of Turkish bases, Black did not mince his words.

“If threatening to expel or suspend Turkey from NATO and to encourage the unhappy Turkish Kurds … will help bring Erdogan to his senses, those steps should be taken. If they don’t bring him to his senses, the threats should be carried out,” Black wrote.

Jonathan Schanzer, the vice president for research at the Foundation for Defense of Democracies (whose executive team includes former CIA Director James Woolsey), maintained in a piece for Politico magazine on Oct. 9 that “Turkey under the AKP is a lost cause” and asked if it was “time to kick Turkey out of NATO.”

Western diplomats in Ankara sounded out by Al-Monitor admitted that there is frustration with Turkey among Western governments over the reluctant, almost standoffish, position Ankara has taken in the fight against IS. They pointed out that it's a long shot, however, to look at this and argue that Turkey should be expelled from NATO.

These diplomats underscored the fact that there is no risk of this happening given Turkey’s crucial geostrategic place on the map, and declared that security ties with Ankara will remain strong, despite differences.

“All the talk about kicking Turkey out of NATO reflects emotions more than facts. It shows there is public frustration. But the situation is a complex one,” said a Western diplomat who spoke on condition of anonymity because of his position. “No one will risk alienating Turkey at a time like this because it is geographically placed at the center of almost all the crises the West is closely concerned with.”

He pointed out that former NATO Secretary-General Anders Fogh Rasmussen, and new Secretary-General Jens Stoltenberg, had both underscored Turkey’s important contributions to the alliance, especially in Afghanistan. He said both men had also assured Ankara that NATO was committed to helping Turkey if its security was threatened by the crisis in Syria.

Despite such assurances, Turks are angered by remarks such as those coming from Levy, Black and Schanzer. NATO has never been popular with the Turkish public anyway for reasons explained by Metin Turcan in his Oct. 29 post for Al-Monitor.

The last Global Attitudes survey by the Pew Research Center also indicates that 70% of Turks are opposed to the alliance. So what do the Turks' sentiments and the negative publicity in the West represent for Turkey’s NATO membership? Is this membership under threat?

Unal Unsal, a former Turkish ambassador to NATO, agrees with Western diplomats who say there's no risk of Turkey’s being expelled from the alliance. “The world has changed since NATO was established but Turkey’s position is much the same. It was admitted as a member primarily due to its important geographic location and the importance of this location continues today,” Unsal told Al-Monitor.

“At any rate, talk of kicking Turkey out is idle because NATO does not have rules for this. It is only up to member states to leave if they want,” Unsal added, going on to underline that Ankara’s Western allies are aware that Turkey is undergoing a painful transformation process.

“Only 50% of the public supports Erdogan and the Justice and Development Party (AKP). There are also those within the AKP who question the government’s policies. These are things that Western governments are also noting,” Unsal said.

The bottom line: Both those in the West who say Turkey should be kicked out of NATO and Turks who argue that Turkey should ditch an alliance that has rarely done anything good for Turkey reflect emotional positions that are not accepted by Western governments, NATO officials or Turkish officials.

It seems that unless Turkey wants to leave NATO, it will remain a member as long as the alliance survives. Meanwhile, it's clear that NATO allies also have varying degrees of differences among themselves, a fact that is apparent in the present crisis between Ukraine and Russia, for example, and which was more than apparent during the second Gulf War.

Angry suggestions by opinion-makers to have Turkey expelled from NATO are likely to have little effect in real terms, except to increase public animosity and pose annoyances for the alliance’s policy planners.