Some believe the Turkish government is downplaying a measles outbreak compounded by the arrival of Syrian refugees despite warnings by World Health Organization and Turkish medical experts. 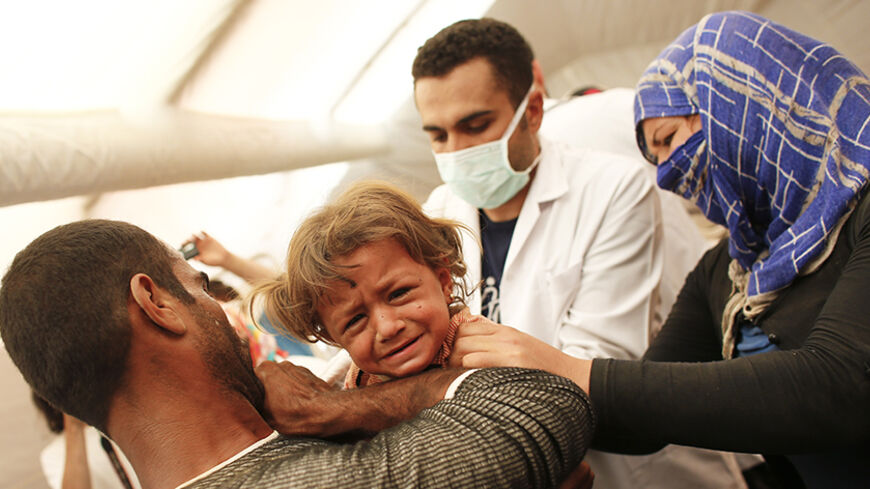 A medic examines a Kurdish Syrian refugee child inside a temporary medical facility for children on the Turkish-Syrian border near the southeastern town of Suruc in Sanliurfa province, Sept. 24, 2014 - REUTERS/Murad Sezer

Turkey has recently faced a number of challenges, including terrorism and unemployment, after being swamped by refugees fleeing the Syrian civil war. Now another problem has emerged in the form of measles. The Turkish Medical Association (TTB) claims that the refugees are contributing to an increase in measles cases in the country.

The World Health Organization (WHO) warned last year of measles, tuberculosis and contagious skin diseases spreading in Syrian refugee camps in Turkey, Jordan, Lebanon and Iraq. Despite WHO's warning, the Turkish government's response appears lymphatic. During a budget debate in parliament Nov. 20, Health Minister Mehmet Muezzinoglu claimed that the situation was “under control.”

Robert Perry of WHO said earlier this month that the global campaign to eliminate measles had stalled. Among other factors, he cited the lack of funding and large population movements in the Syrian conflict, which have hindered vaccinations. According to WHO statistics, the number of deaths from measles increased from an estimated 122,000 in 2012 to 145,700 in 2013, with the latter figure representing a 75% decline in mortality since 2000. The rate of decline is significantly below the target of a 95% reduction for the period 2000-2015. An inadequate rate of vaccination is considered the main reason for measles deaths.

The figures Muezzinoglu presented show that measles cases shot up in Turkey, from seven in 2010 to more than 7,000 in 2013, under the impact of the refugee wave. In the first nine months of 2013, Turkey reported 6,983 cases of measles, the highest in Europe and the third highest in the world, after China and Nigeria, according to WHO. To allay concerns, Muezzinoglu stressed the drop in 2014 cases compared to 2013. Although the figures speak of progress, they are still a far cry from the seven cases in 2010. Moreover, because of fighting in Aleppo, a fresh influx of Syrian refugees is feared and with it the possibility of a renewed measles outbreak. The risk is real.

Independent parliamentarian Levent Tuzel submitted a written parliamentary question to the health minister last year based on the TTB warning about the spread of the disease. In his response, Muezzinoglu acknowledged that Turkey faced the "risk of importation" because of its geographical position and population movements in the region. Yet, measles was not included on the list of contagious diseases requiring funding in the 2015 budget.

Aytug Atici, a lawmaker for the main opposition Republican People’s Party (CHP) and a pediatrician, slammed the government’s health care policies. “Measles does not figure among contagious diseases in the budget booklet the Health Ministry gave us. Why was it taken out? Because the cases are seen to be in decline. But measles is a killer disease. And when it doesn’t kill, it leads to brain inflammation known as SSPE. That’s why vaccination is a must for children,” Atici told Al-Monitor.

“The neo-liberal health policies currently implemented have changed the souls of physicians. They have ceased being public health doctors and become free market doctors. The architect of all this is the Justice and Development Party government and its health care transformation program,” Atici said. He also claimed that officials have distorted the statistics and that actual vaccination coverage is not as it appears.

“On paper, you see that vaccinations have been done. Then, you look at the measles cases. They have shot up. Why? Because the vaccinations are not real. … They don’t give the true figures of measles cases. We suspect that the number of measles cases is understated [in the statistics]. Many cases are not reported. There are many unreported cases in which fatalities occur without the disease being diagnosed. The Health Ministry conducted surveys in schools, asking mothers whether their children had been vaccinated. What kind of nonsense is this? Doesn’t the ministry have records? They are asking parents, teachers and children because they know their records are not reliable.”

Cavit Isik, head of the public health department at Ankara’s Hacettepe University, has also raised suspicions of inadequate vaccination coverage, arguing that the measles outbreak could not be the result only of importation.

“By saying that the virus came from abroad, the Health Ministry denies the outbreak. What difference does it make if the virus comes from abroad? The problem we are experiencing today is not a new one. The measles virus has been spreading across this country for the past three years. It may have come from abroad, but one has to look into why the cases are on the rise. It’s intriguing that the child vaccination rate is about 95%, but the number of cases among children is higher. With this vaccination rate, we should not have seen so many child cases. This leads to suspicions that the actual vaccination rate in Turkey is not as high as it is said to be,” Isik told an online medical journal.

Asked what measures should be taken to overcome the problem, Atici called for a fundamental overhaul of the existing health care system. “Health care is a constitutional duty for the state. Everybody must be vaccinated. This is not a profit-making service. If this profit-making mentality continues, not only measles but also polio and contagious diseases will re-emerge,” Atici said.

“The rise in infant mortality is the most important indication that the health care system has collapsed. Look, the infant mortality rate increased in 2013 for the first time since 1945, by 0.04%. This means 600 baby deaths per year. This does not include the Syrian babies. The arrivals from Syria may have led to an increase in measles cases, but if Turkish children had been vaccinated they would not have been affected. More babies die because they are not vaccinated. Maternal mortality has increased, too. This means the collapse of the health care transformation program. What needs to be done is [to overhaul] health services in line with the principle of a welfare state. Failing to do that will further worsen the small increases [in disease and mortality rates] that we are witnessing today.”