Congress lays groundwork for stepped-up US presence in Iraq

A look at the Middle East issues Congress will be addressing the week of Nov. 10. 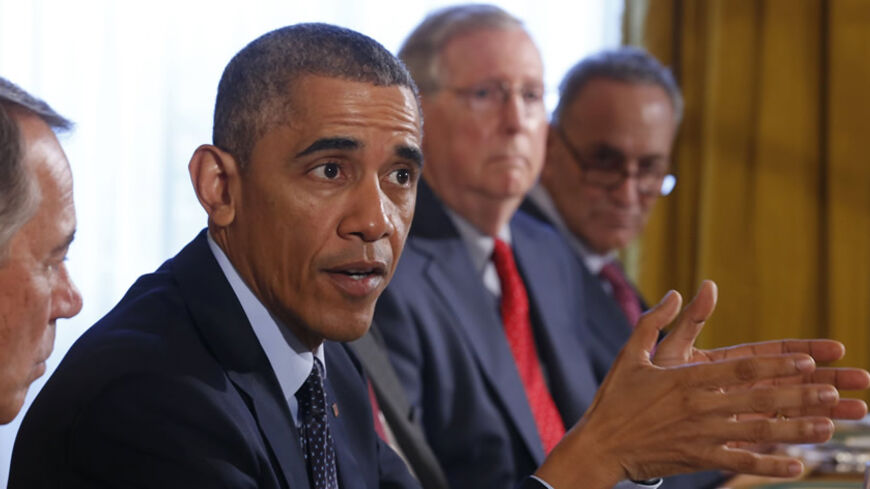 US President Barack Obama talks before a luncheon for bipartisan congressional leaders in the Old Family Dining Room at the White House in Washington, Nov. 7, 2014. - REUTERS/Larry Downing

US lawmakers return from the midterm elections this week determined to give President Barack Obama the money and authority he says he needs to battle the Islamic State (IS) in Iraq and Syria.

Congress is expected to quickly approve the president's request for an extra $5.6 billion, while beginning to lay the groundwork for a new Authorization for Use of Military Force (AUMF). While less divisive than the effort to oust Iraqi President Saddam Hussein a decade ago, the debate remains controversial on Capitol Hill, where lawmakers of both parties are deeply skeptical that the Obama administration has a plan for victory.

"I remain concerned that the President’s strategy to defeat [IS] is insufficient," House Armed Services Chairman Buck McKeon, R-Calif., said in a statement Nov. 7 following the administration's announcement that it was authorizing sending up to 1,500 more troops to Iraq. "I would urge the President to reconsider his strategy and clearly explain how this additional funding supports a new direction. Such clarity is more likely to find swift Congressional approval."

One of the chief concerns remains Obama's insistence on focusing on Iraq, even as the US Air Force has started to bomb IS targets in Syria. Critics say the two fronts are indistinguishable, with IS continuing to attract Sunni recruits the world over because of its willingness to confront Bashar al-Assad's Shiite-allied forces.

"Remember, our first focus … here is to drive [IS] out of Iraq," Obama reiterated at his press conference on Nov. 5. "And what we’re doing in Syria is, first and foremost, in service of reducing [IS'] capacity to resupply and send troops, and then run back over the Syrian border — to eventually re-establish a border between Iraq and Syria so that slowly Iraq regains control of its security and its territory. That is our number-one mission. That is our number-one focus."

The Senate Foreign Relations Committee is taking a lead role, with Chairman Robert Menendez, D-N.J., vowing to "work at once" to draft a new AUMF. The committee is holding a closed hearing on the evening of Nov. 12 with retired Gen. John Allen, Obama's special presidential envoy for the Global Coalition to Counter the Islamic State, Undersecretary of Defense for Policy Christine Wormuth and Vice Adm. Frank Craig Pandolfe, director for strategic plans and policy with the Joint Chiefs of Staff.

The new AUMF may find its way into a must-pass annual Defense Authorization bill in December if it doesn't pass as stand-alone legislation. Republicans, however, may want to delay action until January, when they'll be in charge of the Senate following the Democrats' midterm rout.

Behind the scenes, Republicans are also beginning to lay the groundwork for stepped-up sanctions against Iran as the Nov. 24 deadline for a nuclear deal approaches. A top lawmaker warned US and international negotiators ahead of talks in Oman next week that Congress would not abide by what it considers an unacceptable deal.

"As the P5+1 representatives meet today in Vienna to discuss the looming deadline for the Iran nuclear negotiations," House Middle East panel chairwoman Ileana Ros-Lehtinen, R-Fla., said in a statement Nov. 7, "it is imperative that they recognize that a Republican controlled Congress will not accept a weak deal that threatens U.S. national security interests."

This articl has been updated since its initial publication.