Theater returns to Aleppo amid war

Locals in rebel-held Aleppo defied air raids and artillery shells to see the first play to be held in the area since the Syrian uprising began. 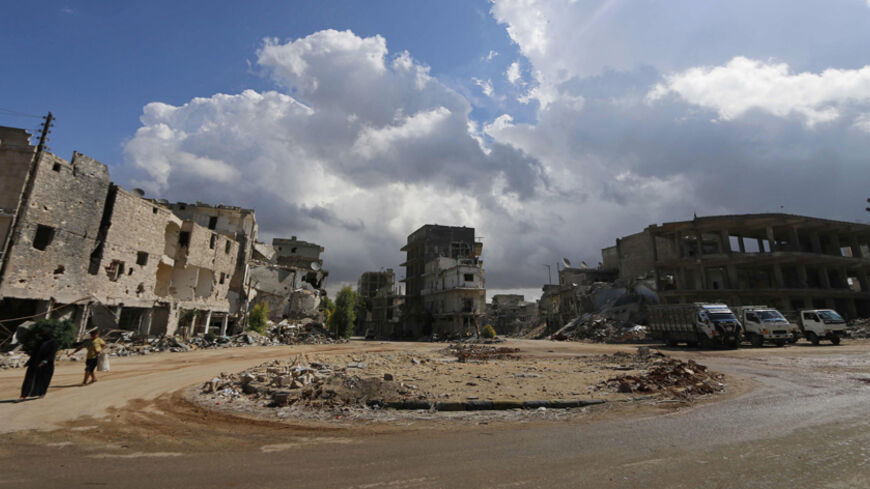 ALEPPO, Syria — When you hear that a theatrical show will be performed in a rebel-controlled area of Aleppo, one might be forgiven for assuming it was a joke in the wake of destruction, devastation and death.

You smile and laugh a bit. Then, you look at the invitation card … Yes, there is a theatrical show on stage … a real stage, with sound effects, lighting and actors.

As you get ready to go to the hall you try to forget that Aleppo is the most dangerous city in the world, where the air raids are carried out on a daily basis, and the streets are almost empty. As you enter the hall, you regain life.

Tariq el-Khebez (Arabic for Bread Way) is a troupe founded by Salman Muhammad, a Syrian-Palestinian youth. Its first work is titled “Dakakeen” (Arabic for “Shops”), and will be performed for four days in one of the eastern neighborhoods of Aleppo, in an abandoned wedding hall located on one of the fronts. The name of the Tariq el-Khebez is a direct reference to New York’s Broadway.

We entered the hall to discover more about “Dakakeen,” which was about to be performed on stage, and the reactions from the audience. We were surprised to find a large number of civilians, families, ladies, gentlemen and Aleppo’s opposition factions leaders present there. There were sentences scribbled on the theater’s walls, including “Give me a theater. Give me a people. We are doomed to hope, Syria is above everyone, and the theater is the mother of all art forms.”

Maarouf Sabsabi, who came to see the play, told Al-Monitor, “For at least two years we have needed someone who conveys the idea of ​​the nation, the revolution and the mistakes made to the whole community, in such a way as this. Unfortunately, time has been lost amid fragmentation and war, which has caused devastation, destruction and victims. Tears came to my eyes as I saw our struggle on stage tonight, through these creative youth. This message should help us save what remains of the revolution.”

Al-Monitor was able to speak with one of the actors, Fouad, who said the play was a rare treat for civilians suffering from war. “I cannot explain how it feels to perform the role as much as I can convey the happiness I feel at the joy of the audience watching the show. The civilians, tired of the displacement and of the principles being scattered, are the ones that need to be saluted, and we need to direct our attention to them and do everything that can be done,” he said.

Fouad explained his character in this politically charged play.

“In the show, I play a youth who was one of the protesters at the beginning of the Syrian revolution. My character then takes up arms alongside the Free Syrian Army to defend his family, city and the demonstrations. This rebelling youth has witnessed his colleagues dying as martyrs, and he suffers, just like the others; his principles are scattered, the revolution’s slogans are lost. Then, he takes the final decision to oppose every thief, enemy and exploiter of the revolution,” he said.

"Dakakeen" speaks of those with agendas; those who trade in violence; those who take advantage of the revolution; and those who shift their positions according to their interests and the interests of the countries that support them — at the expense of the Syrian people's revolution.

There were five tables on stage, changing according to scenes, starting with the Baath Party rule, to the first revolution, the international funding and the shift in slogans. The demonstrators and armed youth attempts to protect the revolution were strongly and painfully present in every scene. Then, the one character uncovers his face to the audience and says: “I am the dollar, I am the devil,” in a reference to Gulf financiers of militias.

The youth in charge of the troupe say more plays will follow, despite funding themselves with only some help from their close friends. The stage cost them less than 10,000 Syrian pounds ($62). They do not get support from any institutions and do not want to use any logos, or slogans of any institution, to ensure it remains for ordinary people and local theater enthusiasts.

"Dakakeen" is one of the first works of art to not be subject to any security or surveillance in more than four decades of rule by the Assad regime, and its content portrays a deep despair felt among ordinary Syrians.