Palestinians will wait until January to seek UN recognition

Despite reports to the contrary, the Palestinian leadership will most likely wait until January before asking the UN Security Council to vote on Palestinian state recognition. 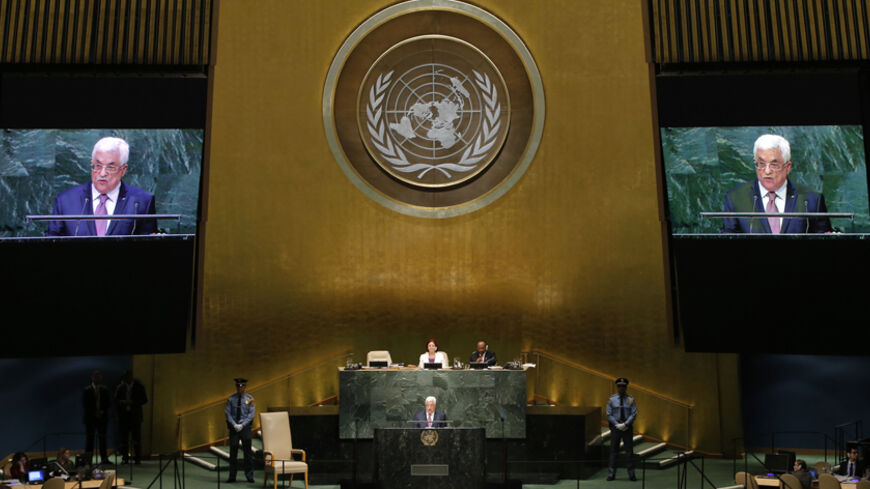 No official has said it bluntly, but the Palestinian threat to seek recognition of statehood again from the UN Security Council is likely to be postponed until the end of the year. US Secretary of State John Kerry has repeatedly asked for this postponement and without the needed nine votes to force the United States to veto a resolution, it makes little sense to go to the Security Council now.

However, as of Jan. 1, the Security Council will include countries that will easily secure the needed votes for Palestine: Venezuela, Angola, New Zealand, Spain and Malaysia are replacing Argentina, Australia, Luxembourg, South Korea and Rwanda.

Fatah leaders attending the Revolutionary Council told Al-Monitor that they have given President Mahmoud Abbas the freedom to delay until January, if needed, to fulfill the current road map of joining all UN agencies once the Security Council is given a chance to vote on the Palestinian demand.

Speaking on Palestine Today TV after the council’s 1½-day meeting on Oct, 23, Sabri Saidam, the deputy secretary-general of the Fatah Revolutionary Council, said that a number of steps were discussed in the Fatah meeting before any major break with the Oslo Accord and the security coordination with Israel that came with it. These steps include: seeking a vote in the Security Council; if the United States vetoes, then the consequent step would be to join all UN agencies, including the Rome Statues regarding the International Criminal Court; and then, clearly declaring the end of security coordination with the occupiers.

Saidam, however, said that even this last step of holding Israel responsible for the occupied territories does not mean the dissolution of the Palestinian government. The Fatah official said that much discussion went into ending security coordination, explaining that the leadership understood the grave financial and human costs that this would reflect on the everyday lives of Palestinians, the economy and the security situation. ”I don’t think we should veer from our agreed-upon phases.”

Saidam spoke passionately about the folly of jumping to phase three before going through phases one and two.

Raed Debiy, a Fatah youth leader and head of the International Affairs portfolio in Fatah, told Al-Monitor that Palestinian youth are sick and tired of delays and accommodating the occupiers. “Israel is a military and nuclear power and is playing with fire in Gaza, in Jerusalem and with the settlements issue.” Debiy, the vice president of the International Union of Socialist Youth, says that Fatah youth are willing to give the leadership some time but that they can’t wait forever while Israel is destroying the future of Palestinian independence. “The Shabiba [Fatah youth] wants the leadership to cancel the security coordination with Israel.”

The anger of Palestinian youth's anger, coupled with the interview given by Saidam, gave the impression that the Fatah Revolutionary Council, under pressure from Kerry, was diverting from its previous promises to go to the Security Council. This forced Amin Maqboul, the council's secretary-general, to give an interview to London-based Al-Quds al-Arabi, insisting, “The Revolutionary Council only gave the leadership freedom to choose the correct time for fulfilling the promise of ending political, economic and security coordination with the occupiers.”

Debiy acknowledged in the interview with Al-Monitor that Palestinians are not doing enough nonviolent resistance to help speed up the end of the occupation. “We have made some efforts in Area C to set up Palestinian villages like Ayn al-Shams, al-Karameh, Ayn Hiljeh and others in the Jordan valley, but a much more serious nonviolent movement is needed,” he conceded. He said new unified efforts will soon take place by Palestinian youth to help the Bedouin communities, especially around Jerusalem, to resist attempts to relocate them in order to make space for new Jewish settlements.

Debiy said that there is a great need for a unified Palestinian effort for such popular protests to be successful. “If we want to successfully do things similar to what Ghandi did or what South Africans did, we need to be united,” he argued.

Despite threats by senior Palestinian officials, such as Saeb Erekat, not to delay the move to the UN Security Council, the likelihood is that Abbas will delay this step until the change of the membership in the Security Council on Jan. 1. The delay could help a weak and divided leadership put more effort into rebuilding national unity, which has been severely damaged since 2007.

The threats in Jerusalem and the need for joint actions to rebuild the Gaza Strip can be a strong motive for such unity. The world is clearly focused now on the fight against Islamic radicalism and is not willing to spend any political capital on Palestine. Fatah leaders conceded to Al-Monitor that by January 2015 the situation might be better and the chances of a near unanimous vote in the Security Council will be much higher, making it even harder for the United States to cast a veto.