Netanyahu shows himself to be educational elitist

An argument between Negev and Galilee Development Minister Silvan Shalom and Prime Minister Benjamin Netanyahu stirred up the issue of pupils of Mizrahi origin discriminated against and sent unjustifiably to vocational schools. 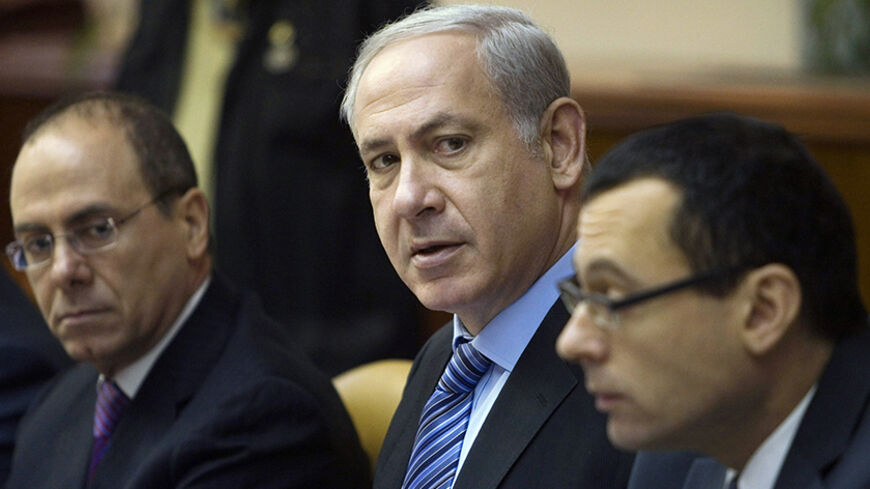 The dispute that erupted during the Cabinet meeting on Oct. 22 between Minister of Development of the Negev and Galilee Silvan Shalom and Prime Minister Benjamin Netanyahu will be remembered mainly for the way Shalom blasted Netanyahu. “Go send your son to be a welder!” he hurled at the prime minister, and his words immediately made the media headlines.

Pundits were quick to present this clash as yet another indication of the deteriorating relationship between Netanyahu and senior members of the Likud Party. While that is certainly true, it is hardly the main point. The conflict between the two men does have a political layer that goes back years, and this was undoubtedly another example of the tainted relationship between them. More importantly, however, it focused public attention on one of the most painful social issues facing Israel, an issue of the kind that has never really challenged or bothered Netanyahu in the past.

Whether the dispute was intentional on his part or whether it was personally motivated, Shalom opened up a serious discussion about vocational training in Israel. At the crux of the debate was a network of schools intended to train young people in various technical professions. In practice, the network actually kept students from the periphery — most of them of Mizrahi (Middle Eastern) origins — from pursuing a more academic track, from continuing on to a higher education and from becoming an integral part of the country’s cultural and economic elites. Social criticism of the phenomenon, coupled with economic and industrial developments, saw these vocational tracks gradually shut down since the 1980s, so that today there are significantly fewer programs of this kind.

Anyone who went through these schools in the country’s development towns is familiar with the random selection process. In this process, the class head teacher determined which students would pursue an academic track that would enable them to receive their matriculation certificate and increase their chances of integrating into Israeli society; which students would learn the skills to become a welder, a metalworker or a carpenter; and which students would learn how to sew. In most cases, students placed in a vocational track were destined to spend the rest of their lives branded as being somehow weaker and less talented. They were denied the opportunity to improve their social status. The same thing occurred for decades, generation after generation. The social distinctions that were perpetuated can still be felt today.

It was only natural that Minister of Welfare and Social Services Meir Cohen and Environmental Protection Minister Amir Peretz took Shalom’s side in this conflict — they are of Mizrahi origin, too. Like Shalom, they were not born in Israel, and like him they grew up in the country’s southern periphery in the 1960s. Shalom was born in Tunisia in 1958. He immigrated to Israel when he was 1 year old and was educated in Beersheba. Cohen was born in Morocco in 1955. He immigrated to Israel at the age of 6 and was educated in the towns of Yeruham and Dimona. Peretz was born in Morocco in 1952. He arrived in Israel at the age of 4, settled in Sderot and attended kibbutz schools in the region. All three men represent the handful of outliers from that period who managed to break through the glass ceiling.

When Netanyahu charged that Shalom was basing what he said on some “personal trauma,” an outraged Shalom responded that he actually studied in an academic-scientific high school track. The fact is that both men are right. Shalom is one of the most educated ministers in the current government, with degrees in both accounting and law. Nevertheless, he probably carries the baggage of having grown up in that era, too, and is intimately familiar with people his age who were sent to pursue a vocational track, even if they could have pursued academic studies if only coaxed in that direction.

Netanyahu, on the other hand, belongs to a sector of the population that never suffered from prejudice and discrimination. Born in 1949, he was the son of a history professor. He grew up and went to school in both the Rehavia neighborhood of Jerusalem, home to the country’s academic elite, and in the United States, where he also lived with his parents. While there, he attended Cheltenham High School on the outskirts of Philadelphia, considered one of the finest schools in the United States at the time. He and his classmates in both Jerusalem and the United States went on to pursue a higher education in some of the most prestigious universities in Israel and around the world. After having served in the Israel Defense Forces in Israel (1967-72), Netanyahu returned to the United States and studied architecture and business administration at the Massachusetts Institute of Technology and political science at Harvard University.

When Netanyahu called for the re-establishment of vocational tracks in the education system, Shalom’s response was only natural. Given that the prime minister would presumably never really consider sending one of his sons to study welding or metalwork in a vocational school, this looks like yet another attempt to exclude the weaker sectors of the population from positions of influence, rather than an attempt to make traditional technical professions, which have all but disappeared, fashionable again.

No one has ever accused Netanyahu of being socially conscious. He spent his childhood and youth living in an elitist bubble, and was only exposed to the “other Israel” when he entered politics. He never presented a clear social vision or set any specific targets when it came to reducing social gaps and promoting social justice. As finance minister (2003-05), he was deaf to the problems of the weakest sectors. He began by cutting the stipends the less fortunate received, and it was only when he realized that with so many of his voters coming from the periphery, his decisions were costing him politically that he expressed regret for his policies and apologized to them.

Rather than lashing out at Shalom and offering a condescending explanation as to how vocational training is the future, Netanyahu should have shown greater sensitivity. He should have remembered that this wasn't about a personal trauma of Shalom, but concerned a trauma of an entire generation. He should have redirected the discussion so that it would be more practical and constructive, instead of explaining to Shalom that he is living in the past. Netanyahu might have done better by demonstrating maturity and leadership, instructing a thorough study of the future employment market and tomorrow’s professions. This would enable the vocational schools to adapt to the future employment market, thus turning themselves into a place of social mobility. Furthermore, it is regrettable that the other, non-Mizrahi ministers didn’t speak up during this important discussion.

There is certainly a place to discuss the role of vocational schools in Israeli society. On the other hand, it is clear that even with all of the educational reforms introduced over the past three decades, perceptions that threaten to perpetuate social gaps, prejudice and discrimination still exist, even among the highest levels of the country’s leadership.