The Shiite authority in Iraq, led by Ali al-Sistani, has set out guidelines for social powers and responsibilities, ensuring it remains connected to Shiite communities. 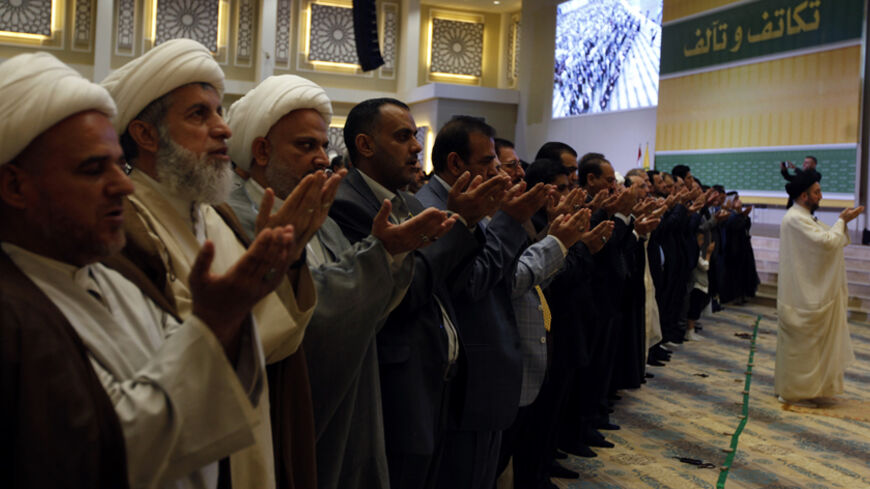 Shiites attend prayers for Eid al-Fitr as they mark the end of the fasting month of Ramadan at the headquarters of cleric Ammar al-Hakim, the leader of the Islamic Supreme Council of Iraq, in Baghdad, July 29, 2014. - REUTERS/Ahmed Saad

The Shiite community has much more religious coherence than its Sunni counterpart. This raises several questions for Sunni authorities, including the ones raised by prominent Iraqi Sunni cleric Sheikh Ahmad al-Qabisi in response to Ali al-Sistani’s fatwa regarding the need to defend Iraq against extremist Sunni attacks. “Shiites have a strong authority that orders and is obeyed. However, Sunnis do not and will not have a similar leadership or authority,” he said.

The religious Shiite institution has never had a clerical system such as the Catholic Church in the Vatican. However, it does have a strong bond with its popular base and can mobilize millions by issuing a single fatwa. The Shiite authority has a prominent historical role within Shiite communities through the social and spiritual power that the religious leadership has over its followers.

One can find several examples of Shiite clerics having prominent social roles in the region’s modern history. Sayyid Hassan al-Shirazi’s fatwa (1814-96) led the dissolution of one of the greatest trade contracts between the Kingdom of Iran and Great Britain in 1891. Shiite authorities played a decisive role in the constitutional revolution in Iran between 1905 and 1907. The entire Iraqi public rose up against the British when they occupied Iraq after World War I, in the Great Iraqi Revolution of 1920. There are plenty of other examples that can be seen throughout Sistani’s leadership in modern-day Iraq.

Despite all the social transformations of the modern era, Shiite authorities still have a broad social power over their followers in the various Shiites communities around the world, which gives great power and cohesion to Shiites compared with other denominations of Islam. Where does this power come from, how is it implemented and how do the religious authorities communicate with their followers in Shiite communities?

Shiite religious institutions have relative political and economic independence from governmental controls, which has given them major social influence, since these religious authorities have been seeking to exercise power outside politics. This has tied them to their social base, and created common interests between the two parties. In contrast, Sunni religious leaders are usually elected by governments and operate as part of a regime, as is the situation now in Saudi Arabia and Egypt.

The Shiite authority offices are split into four main departments: a department to study and issue fatwas and religious edicts, the Department of Social Relations, the Department of Social Assistance and a department for communication with political authorities. Each department communicates with its popular base, where authorities usually take into consideration the social pulse of all these fields. This system has evolved throughout the centuries and turned into a general office of authority for the management of affairs for Shiite religious power.

Communication between followers and religious institutions is done through a wide network of agents who are directly supervised by the office of authority. The process of selecting agents is done with great sensitivity so as not to be exploited by certain people. Sistani has developed a hierarchical network of licensed individuals that includes 350 personnel in various regions in Iraq. All licensed individuals are conditioned not to accept any political position and not to be biased toward any political party. In the event that any of them breaks this condition, they shall be dismissed and immediately replaced. This occurred when 15 licensed individuals were dismissed following the last Iraqi elections, for explicitly being biased toward certain political parties participating in the elections.

This is important for maintaining a general social power for the entire Shiite community. Sistani has been committed to this principle since 2003 without any major changes. He gave general instructions for clergy in Iraq following the overthrow of Saddam Hussein, as stated in the book "The Texts Issued by Sayyid Sistani" by Hamid al-Khafaf. It said, “Clerics should not be affiliated to administrative and executive matters. Their role should be limited to enlightenment and guidance.” He also stressed this during his last meeting with some students of Hawza, at the beginning of the current academic year in Najaf. He asked all students of Hawza to "avoid affiliation to any political or religious party, no matter the sanctity of its founder and stay away from political matters because this distracts students from their education and involves them in unnecessary mazes at this stage."

The Department of Political Communication is Sistani’s only form of participation in the political field. This is limited to helping various political parties work together, resolve their differences and get things done, as well as providing advice and general guidance. The imams of Friday prayers in the city of Karbala, Sheikh Abdul Mahdi Karbalai and Ahmed al-Safi, are the only licensed sheikhs who have the authorization to declare a political position on behalf of Sistani's office. Sistani’s shrewd political positioning led to an agreement between all Shiite parties around him, who recognized him as a religious authority with a broad social power involving the Shiites of Iraq and other parts of the world.

The Department of Social Assistance also plays a major role in linking the Shiite authority to the community. Al-Monitor was informed that this assistance amounts to $5 million a month in southern Iraq alone. For example, Najaf received 15,000 displaced persons during the recent Iraqi crisis, and they were not only Shiites but also included Sunni families. Sistani’s office contributed 150,000 Iraqi dinars ($130) for every displaced family, without taking into consideration their religion, with an additional 50,000 dinars ($40) for each member of the family, as well as a daily meal. In the same context, there is a wide network of services and economic support in various fields such as education, health and culture in other areas of Iraq and across the Shiite world. The sources of these funds are wealthy Shiites who provide their authorities with an annual liturgy in addition to gifts, endowments and other public charities.