The poor production quality of the Iraqi entertainment industry is the direct result of mismanagement made intractable by rampant corruption. 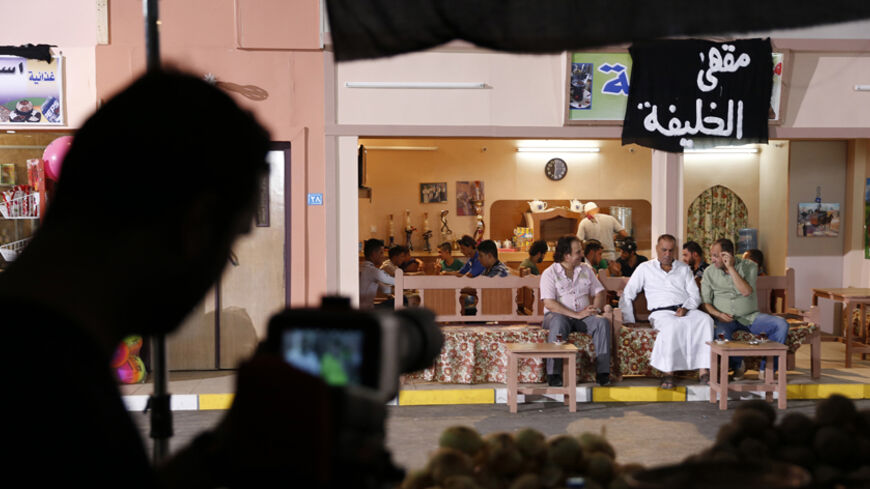 A view shows actors during the filming of the set of the television series, whose title is loosely translated as "State of Myths" in Baghdad, Oct. 10, 2014. - REUTERS/Thaier al-Sudani

Each year, Arab TV stations compete to buy and broadcast dramatic productions from Egypt, Syria and Gulf counties. Yet, there is no demand for Iraqi drama, which is limited to local TV channels. It is a bitter reality for the Iraqi TV and film industry, over which concerned parties are in constant disagreement.

The dilemma is complex enough to make it hard to determine the exact problem. The industry’s players blame each other for its deterioration and loss of identity, and the issue has been widely discussed in the media.

Some actors blame the producers and writers, while the writers hold the producers responsible and others blame the film directors. As for the directors, they distance themselves from this responsibility, and believe that the rest of the key parties in the TV and film industry should be held responsible for its deterioration. During a seminar on the condition of Iraqi drama held in Damascus March 20, 2010, film director Hassan Hosni identified six reasons for the deterioration of Iraqi TV and film production that did not include directing.

Although everyone agrees that poor production is a major problem, the Al-Iraqiya TV channel, the biggest producer of Iraqi drama, seems indifferent to what is being said. In fact, it celebrates what has been achieved so far.

A number of major artists have found themselves forced to withdraw from the scene in protest, to boycott the current industry. Others preferred to emigrate and some prominent screenwriters, such as Farooq Mohammed, Hamed al-Maliki and Ahmed Hatef, stopped writing. Maliki told Al-Monitor that he has been living off his personal savings since he made this decision.

These figures' withdrawal from the scene is not contributing to resolving the problem, but may instead exacerbate it by leaving only beginners and inexperienced people.

The situation must be addressed realistically, said actor Samar Qahtan. In a phone interview with Al-Monitor, Qahtan acknowledged that Iraqi drama is not up to par with general Arab drama, and that its situation is unstable.

According to Qahtan, Iraqi drama is still relatively new. He holds that one cannot compare current Iraqi drama to its period prior to 2003. Back then, the state was in control of production, there was a single TV channel and total production did not exceed two works per year, with all available resources tapped to make them successful. He noted that with production this scarce, Iraq could not be considered to support an important and influential industry.

Following 2003, a large number of TV channels were created and the demand for TV production increased. As qualified artists were limited, the new stations and producers were forced to resort to staff new to the industry.

Qahtan asked, “When they decided to produce 15 TV series per year, did the Iraqi TV channels’ supervisors ask where they could get technical staff to cover all of these works?” He said it was possible to address a large part of the problem by distributing the budget of these series over two or three works with a good story, competent producers and a well-paid technical staff.

It seems that the problem starts with policy. Qahtan did not deny that Iraqi TV channels were working to produce a large number of TV series. The latter are increasing and fill a great deal of air time. Qahtan confirmed this view. He said, “The producing channels care less about quality; rather, they are interested in filling up air time. This is why they do not mind hiring a non-specialist writer, or assigning the work to a greedy producer, who assigns the work to a weak producer agreeing to his own conditions. The final product ends up with amateur actors, so one can imagine the quality of the works offered to the audience.”

For others, this realistic perspective needs to be applied to the entire situation, which is broader and more complex, believes screenwriter Hamed al-Maliki, who stopped writing. In an interview with Al-Monitor via e-mail, Maliki cited technical and administrative problems in the industry.

Maliki said that in the absence of strong foundations and traditions, all of the branches of Iraq's TV and film industry are weak. A story is selected and produced by workers who have no clue how to run the project. “Some directors adopt old and boring directing techniques, while the actors are trained to present a theatrical performance. In addition, we have greedy producers that look for cheap scenarios regardless of how bad they are,” he said.

Although former leader Saddam Hussein's regime was once in total control of the industry, it is generally believed that Saddam's overthrow did not improve things. What was supposed to be freedom has turned into a mess. Maliki agreed. Al-Iraqiya, for example, shares the mindset of the former regime in asking its writers to write against that government. Maliki asked, “Didn’t the former regime ask writers to write texts condemning the era preceding the rise of the Baath party to power?”

According to Maliki, had the problem been limited to only this issue, it would have been easy to solve. There are other serious problems that he refused to address for personal security reasons.

Others, such as director Hafez Laibi, spoke of what Maliki refused to discuss, as namely the rampant corruption in Iraq. The Iraqi TV and film industry is one of its victims.

At a symposium held by the Iraqi Commission of Integrity on March 17, at the headquarters of the Iraqi Union of Writers in Baghdad, some called for the industry to join the fight against the rampant corruption in the country. A quarrel took place, as some of the audience members objected, saying that the industry itself is plagued by corruption.

The widespread corruption in the Iraqi TV and film industry forces its professionals to set specific priorities. Despite the importance of developing Iraqi technical staff’s skills and competencies and creating a production policy governed by sophisticated practices, the priority should be on the fight against corruption and holding those behind it accountable.