The Syrian Revolutionary Front has rejected media reports that it signed a nonaggression pact with the Islamic State, but there are efforts being made in south Damascus to reach a local truce. 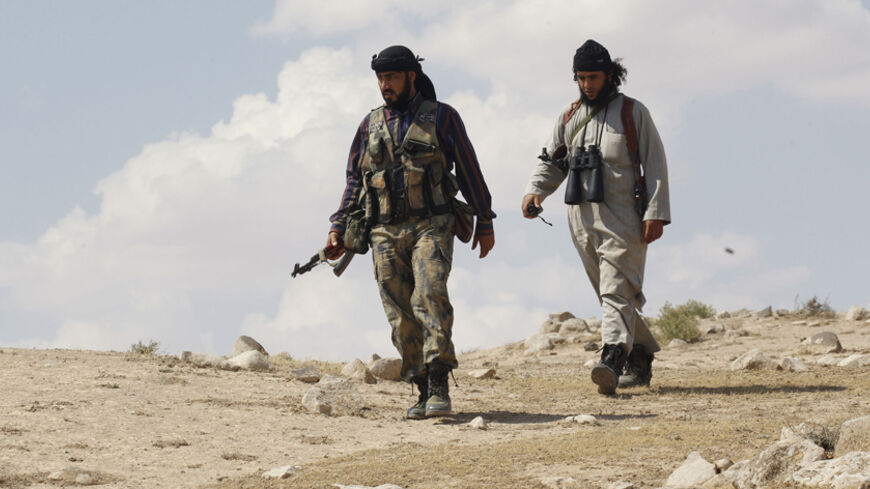 ALEPPO, Syria — News emerged Sept. 12 that Syrian rebel factions, including the Syrian Revolutionary Front (SRF), had signed a nonaggression pact with the Islamic State (IS). The claim, originally published by Agence France-Presse (AFP) and citing the Syrian Observatory for Human Rights, has been strenuously denied by Ibrahim Barakat, an SRF spokesman, in an interview with Al-Monitor.

“We are still fighting this organization, which is murdering our children, and more reinforcements are on the way to combat it,” said Barakat. On Sept. 13, the SRF, operating primarily in Idlib province, in Syria’s northeast, had sent military reinforcements to the northern Aleppo countryside, following an IS attack on the region.

A video posted online shows a convoy of dozens of vehicles transporting SRF fighters and heavy machine guns. The SRF media office said that they were heading to Marea, in the Aleppan countryside, after IS reached its outskirts.

In the same video, SRF leader Jamal Maarouf, standing with fighters and heavy weaponry as a backdrop, announced, “The first troops of the Syrian Revolutionary Front brigades arrived at Marea, in Aleppo, in response to our people’s calls there to deter Bashar al-Assad’s bloody militias and Abu Bakr al-Baghdadi’s [IS] mobs.” He added, “God willing, we promise God and our people that we will send hordes after hordes until the Aleppo countryside, Raqqa and Deir ez-Zor are freed from the evils of Assad’s and Baghdadi’s mobs.”

On Sept. 17, Al-Monitor visited a front line, adjacent to Marea, between rebel brigades and IS. Hundreds of SRF fighters had been deployed there with heavy ammunition. The SRF possesses large quantities of weapons compared to other opposition factions.

Pointing to locations on a map where the front’s men had been deployed, an SRF field officer told Al-Monitor, “We are still fighting IS, and there are new reinforcements coming from Idlib. We will continue our operations until IS is eliminated from Syria and our people are protected from its aggression.”

So, what happened? How did the rumors of a truce get started?

In south Damascus — to be specific, in the Hajar al-Aswad neighborhood, which has been under siege by the regime for months — word began to circulate that the opposition factions deployed there had signed a cease-fire agreement with IS. These factions allegedly included one of the brigades affiliated with the SRF.

The SRF denied this as soon as the news hit and posted a statement on Facebook: “The Syrian Revolutionary Front in south Damascus declares that it hasn’t made any agreement to stop fighting IS in south Damascus. Our stance is clear vis-a-vis this oppressive organization murdering our children.”

Efforts to reach a truce in south Damascus have, however, been made. A media activist in south Damascus told Al-Monitor via Skype, and on condition of anonymity, “There are attempts to sign a truce between the revolutionary brigades and IS, as the rebels have been drained in their battle against the regime for three months now, while the latter [IS] has [also] been imposing a blockade on the neighborhood.”

He further stated, “If the battles against IS persist, the rebels’ existence will be threatened, as they have been divided [between fighting] IS and the regime besieging the neighborhood.” He confirmed, “The agreement has not been made yet, as sporadic clashes continue between IS and the rebels.”

These developments were followed by an assassination attempt against Maarouf on Sept. 17, when aircraft from Assad's regime raided his hideout, killing Maarouf's daughter and one of his deputies. Commenting on the incident, with no apparent signs of injury, Maarouf said, “Five days ago, we were violently attacked by Baghdadi’s booby-trapped cars, … and yesterday Assad’s oppressive state raided us and claimed the life of my daughter and wounded several people.”

He challenged his opponents: “Assad and Baghdadi, stop lying. You are part of the same faction, but you are deluding people. We can see that you are one, and that you are coordinating together. We affirm that we will keep fighting every tyrant and oppressor.”

The SRF is considered one of the rebel opposition’s moderate factions. The attempt on Maarouf's life is a message from the regime to the United States that it will not hesitate to target US allies, after Washington snubbed the regime by deciding to fund the Syrian rebels in the fight against IS.