While denying accusations that it helped conduct air strikes in Libya, Cairo is seeking international support for an initiative to stabilize the country and disarm the militias. 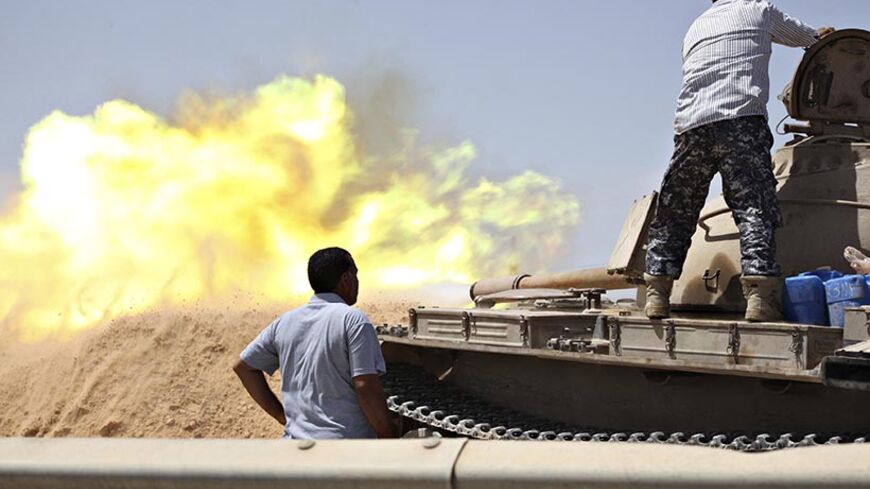 A tank belonging to the Western Shield, a branch of the Libya Shield forces, fires during a clash with rival militias west of Tripoli, Aug. 22, 2014. - REUTERS

CAIRO — Egypt was recently accused by the United States of carrying out airstrikes in Libya in alliance with the United Arab Emirates (UAE), a charge that was soon dropped.

Meanwhile, Cairo is seeking international support to guarantee the success of its initiative to restore stability in Libya and remove heavy weapons from the militias and tribes in return for their participation in political life. Egypt does not wish to interfere in Libyan affairs amid the lack of reliable institutions capable of completing the disarmament process. Thus, Cairo is seeking the help of international organizations such as the United Nations to ensure the success of the move, which it recently approved in ministerial-level meetings with Libya’s neighbors.

Maj. Gen. Zakaria Hussein, a strategy expert and the former head of the Nasser Military Academy, said in an interview with Al-Monitor that the doctrine and principles of the Egyptian armed forces does not allow any attack on a neighboring country that has not infringed on Egyptian territory.

Hussein asked: “How can the success of the Egyptian initiative be ensured? Who will ensure the disarmament of militias in the absence of a state in Libya? Who will adopt the law? Egypt will not enter Libya for disarmament purposes. The fact is that in order to succeed, its initiative primarily relies on the existence of international support. The international institutions ought to play their role in order to restore the needed stability to Libyan territories.”

The assistant foreign minister for neighboring countries, Ambassador Mohammad Badr al-Din Zayed, told Al-Monitor in a telephone interview, “Cairo is awaiting the issuance of international resolutions as well as actual steps to legitimize the Egyptian initiative.”

He added, “We welcome the draft resolution issued by the UN on Libya, but we find it insufficient as there needs to be concrete steps to dry up the sources of terrorism, and all the institutions of the international community have to start activating the initiative aimed at disarming the militias in Libya.”

Zayed went on: “Implementation can be done through the establishment of a fund for the collection of weapons from all of the militias under international supervision. This is an Egyptian proposal that has been put forward in advance, and this proposal currently enjoys support from the neighboring countries of Libya. Moreover, there should be a system of international sanctions against countries that provide these militias with arms and money and against these very militias that receive the arms and financial support to sabotage Libya.”

He stressed there are other parties interested in distorting the Egyptian role in restoring stability to Libya by promoting rumors that the Egyptian army has hit Libyan sites. Zayed added that there are also countries that help extremist elements that are speeding up the complete collapse of Libya.

As for the role of Libyan tribes in the Egyptian initiative, Zayed explained, “We have no problem with the Libyan tribes, as the danger does not emanate from the tribes, and the goal is not to disarm the tribes as these are historically known to have weapons in the region, but not heavy ones. These tribes are not a partner in these confrontations, but they strive for stability. There is currently a risk extending outside the boundaries of Libya with the existence of more than 400 militias.

“Cairo is currently working on new moves to put the initiative into effect, and the next stage will be an intensive program of new meetings to establish a new consultation with neighboring countries to declare actual steps to implement the initiative.”

Cairo confirmed its nonparticipation in the recent airstrikes on Libya, but Egyptian Foreign Minister Sameh Shoukry hinted that Egypt and Libya’s neighbors may carry out acts deemed interference in Libyan affairs. However, he did not specify the nature of such intervention. However, he did say: “The continuation of the current situation within Libyan territory and the resulting security breach in neighboring countries may lead to undesirable intervention in Libyan affairs.