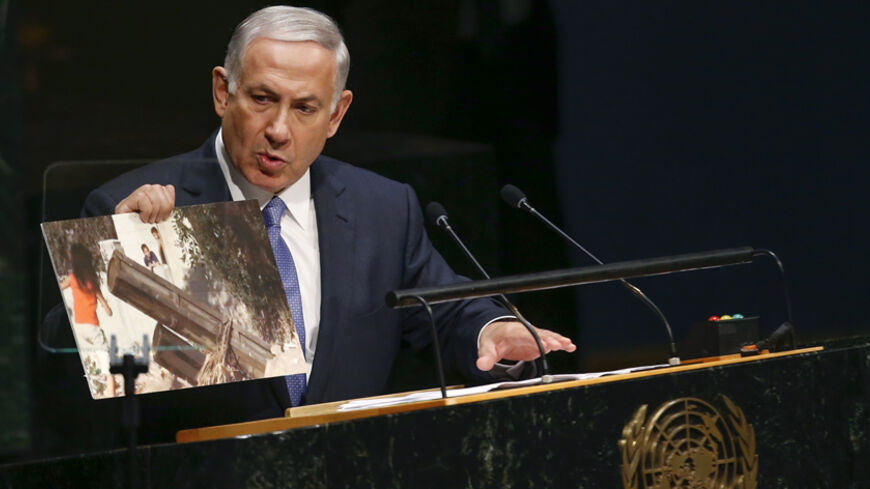 Israel's Prime Minister Benjamin Netanyahu holds up a photograph as he addresses the UN General Assembly at the UN headquarters in New York, Sept. 29, 2014. - REUTERS/Shannon Stapleton

“We don’t believe that Prime Minister Netanyahu or anyone else from Israel is suggesting that the United States launch a military campaign against Hamas,” came the first response of State Department spokeswoman Jen Psaki to Prime Minister Benjamin Netanyahu's comparison of the Islamic State (IS) and Hamas movement in his address to the UN General Assembly Sept. 29.

Most world leaders who addressed the UN General Assembly in the last few days have voiced outrage at the actions of IS and concern over the organization's takeover of territories in Syria and Iraq. Netanyahu, who arrived in New York about a month after the end of Operation Protective Edge, sought to include Hamas in the same package.

“Last week, many of the countries represented here rightly applauded President [Barack] Obama for leading the effort to confront ISIS,” Netanyahu said. “And yet weeks before, some of these same countries, the same countries that now support confronting ISIS, opposed Israel for confronting Hamas. They evidently don’t understand that ISIS and Hamas are branches of the same poisonous tree,” said Netanyahu.

Netanyahu's address was designed not only to mobilize the world against the organization that rules the Gaza Strip, but also to fend off international criticism of Israel following Operation Protective Edge, which led to the appointment of a UN commission of inquiry to investigate allegations of Israeli war crimes.

During the operation, the prime minister’s office started a Twitter campaign proclaiming “Hamas is ISIS and ISIS is Hamas” following the public execution of Palestinians suspected of collaboration with Israel by members of Hamas’ military wing on the streets of Gaza.

American Orthodox Rabbi Shmuley Boteach drew similar analogy in a full-page ad in The New York Times, comparing an IS execution to those perpetrated by Hamas, and pointing an accusatory finger at UN Secretary-General Ban Ki-moon. According to the rabbi, who wields a great deal of influence in the US Jewish community, the UN leader is biased against Israel. “This is the face of radical Islam,” the ad’s banner headline charges. “If the UN is looking for a genocide to investigate, here it is. Not in Israel.”

The history of the Hamas movement is strewn with violence. And that’s why it has been labeled a terrorist organization by the United States, the European Union and other countries in the free world. Yet, while Hamas is an Islamic fundamentalist movement, controlled at times by its armed militants, it is by no means the equal of IS. Its ideology and goals are quite different from those of the organization that is threatening the stability of the Middle East and liable to launch terror attacks on the European countries of origin of some of its brutal members.

The initially proclaimed goal of IS was the establishment of an Islamic caliphate in Iraq and Syria, hence the name by which the organization first called itself: the Islamic State of Iraq and al-Sham (ISIS).

However, as the organization became ever more successful, gaining a foothold in parts of Iraq and Syria within just a few months, its appetite has grown and its ultimate goal has expanded. From now on, the organization known simply as the “Islamic State” no longer limits the borders of its caliphate to the territories of Syria and Iraq. In fact, as far as the organization is concerned, the entire planet is a legitimate target for its aspirations of expansion and it seeks to establish the Islamic caliphate all over the world — a borderless empire in which no other nationalities or religions would have a place.

According to the organization's vision, all subjects of its rule will be devout Muslims living in keeping with the commandments of Allah; or, to put it more precisely, in line with the ideology of its leader, Abu Bakr al-Baghdadi, who has proclaimed himself a caliph.

Iraqi journalist Ali Mamouri explained July 29 why IS opposed — even looked down on — the goals of Hamas in Gaza, and why it had no intention to assist the Palestinians in their struggle against Israel. As far as IS is concerned, Hamas is a movement of heretics whose actions by no means constitute jihad, but rather aim to uphold democracy, contrary to the laws and commandments of Allah.

Hamas is a Palestinian national religious movement. Its methods are deemed controversial, even among the Palestinians themselves; however, its proclaimed goal of fighting the Israeli occupation is widely accepted. According to the Hamas charter, published in August 1988, its ultimate goal is the establishment of a Palestinian state extending over the entire Israeli area. This goal has never been modified. At the same time, even the most radical of the Hamas leaders, including Hamas' political bureau chief Khaled Meshaal, have stated that Hamas would accept a Palestinian state along the 1967 borders, in case Hamas and Israel reached a long-term truce. They have realized that since the desirable cannot be attained, they should settle for what’s within reach.

True, the Hamas charter stipulates that Palestine is a "waqf" land (holy land not open to compromise), and its leaders declare that they will never recognize Israel. Still, the mere fact that negotiations are being conducted between the parties and understandings and agreements have been reached constitutes a de facto recognition of Israel.

The negotiations between Israel and Hamas on a long-term arrangement have resumed in Cairo, mediated by Egypt. Essentially, the arrangement under discussion calls for removing or significantly easing the closure imposed on the Gaza Strip some eight years ago, and for a commitment to a long-term cease-fire.

If Netanyahu really believes that IS and Hamas are branches of the same “poisonous tree,” then such belief is not only self-contradictory but also quite puzzling. After all, how is it that Israel would risk negotiating and reaching agreements with a “satellite branch” of an organization that seeks global domination?

It would be interesting to hear what Netanyahu would have said, had the world leaders — those who “don’t understand” — been negotiating a cease-fire and long-term arrangements with Baghdadi.