Held by IS for 40 days, a Turkish photographer tells his story

A Turkish photojournalist relays his harrowing saga and offers insight into what the Islamic State is planning. 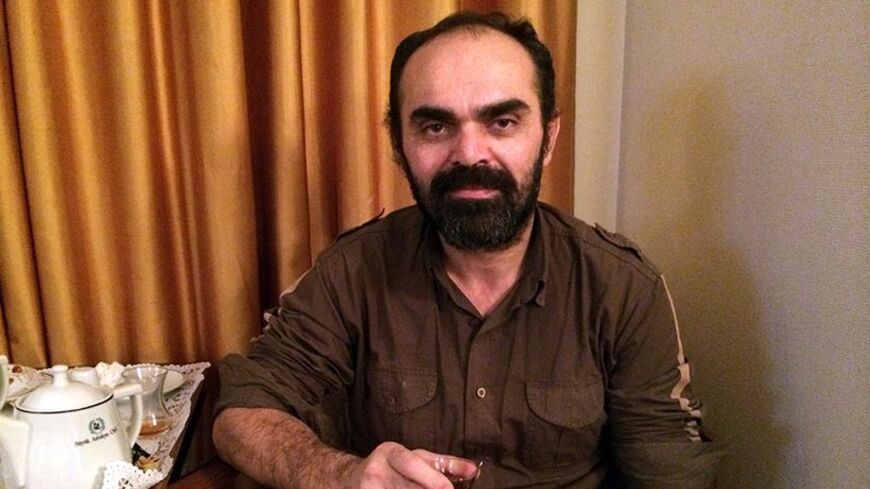 Bunyamin Aygun, a Turkish photographer kidnapped in Syria, poses in Hatay after he was freed, Jan. 5, 2014.

Bunyamin Aygun, an award-winning Turkish photojournalist who was captured by Islamic State (IS) militants last November and held for 40 days, is the first and only journalist held by IS to go public with his ordeal. Aygun’s account, which ran for five days in his newspaper, Milliyet, offers a rare and nuanced glimpse into the murky world of IS. Published in January, the series revealed the heavy presence of Turks in the group and the glaring threat that they pose to their own country. “Turkey is next,” IS fighters repeatedly told the veteran journalist. But the story received scant attention.

In Turkey, a massive corruption scandal implicating Recep Tayyip Erdogan and his close circle held the nation in thrall. The few stories that appeared in Western outlets were short and dry. Aygun had not revealed that his captors were IS at the time. But would it have made much of a difference? Probably not, because Aygun is not a Westerner. He is a Muslim and a Turk. Besides, Mosul had not yet been overrun, nor had all 49 members of the Turkish consulate there been taken hostage by IS. And James Foley’s brutal execution had not yet taken place.

The public's thirst for information about IS in the aftermath of this barbaric act is seemingly unquenchable. And Aygun’s story is a gold mine. I decided to contact Aygun to hear it firsthand. (I was unable to do so at the time of his release because I was in hospital.) We met on a recent evening in a cafe facing Gezi Park, where Aygun had shot powerful images of the mass demonstrations that rocked Istanbul the summer before. Aygun is square-jawed and wiry with dark, soulful eyes. “I’ll only be drinking coffee, lots of it,” he announces.

Aygun was among the first Turkish journalists to start covering the Syrian conflict when it erupted in mid-2011. “Being Turkish was a real advantage,” he recalls. “The people loved us, the Free Syrian Army (FSA) loved us.” Syria became his regular beat and Aygun would doggedly record the violence and suffering that unfolded before his eyes. Like many journalists, Aygun romanticized the rebels in the early days of the war. “Ordinary people sold everything they owned to keep the revolution going, I believed in it, too,” he says.

Undaunted by news of journalist kidnappings, Aygun kept going in. On Nov. 25, Aygun slipped across the border to report on IS massacres in a string of Turkmen villages. He was seized together with an FSA commander while he was planning to interview IS militants near Salkin, a small town facing the Turkish province of Hatay. The early days of Aygun’s captivity were similar to those described by Peter Schrier, an American photojournalist who swapped hands between Jabhat al-Nusra and Ahrar al-Sham (a jihadist group mentored by Turkey).

Aygun was hooded and blindfolded, his hands and legs bound nearly the entire time. Like Schrier, he was moved from one dank cell to another. Fighters in black tunics, baggy trousers and matching balaclavas would interrogate him day after day. “Are you Muslim, Sunni, Alevi? Recite a prayer. Give us all your passwords. Who are those women on your Facebook page? Do you drink? Who are you working for? Give us some names. What is your real name?” his tormentors would bark. “It went on for so long I could no longer keep track, those 40 days felt like 40 years,” Aygun said. Was he tortured and beaten like the American was? Aygun stiffens and refuses to comment. By Aygun’s own telling, IS has a strong network in Turkey. Perhaps, he fears that they might come after him again. I decide not to ask.

His narrative (lasting six hours) resumes. "We were forced to take ablutions and pray five times a day. I didn’t really know how, but Heysem Topalca [his fellow hostage and FSA commander] taught me what to do," he says. "It was the only time they would unbind my eyes and hands."

“If you are a Muslim you have nothing to fear, but if you are lying we will kill you,” the militants would warn.

On the 17th day of their captivity Aygun and Topalca were separated. Aygun was moved to another safe house, this time full of Turks. “'This is it. They are going to kill me,' I thought.” His depiction of his 12 days there is morbid yet fascinating. It sheds light on the mindset of the IS fighters. It also reflects the complexity of Aygun’s relations with them. Aygun gives his captors a human face: He is aware that this may be upsetting especially for families whose loved ones are still being held by IS. But he has “no agenda” he insists. What of IS atrocities, I ask. “What of American atrocities in Guantanamo, in Iraq?” he responds. “We need to understand the circumstances that led these people to choose this path.”

The following is a summary of Aygun’s days with the Turkish brigade.

“The fighters were mostly Turks from Turkey and from Germany. Their faces were covered. You could only see their eyes. It was clear from their voices that they were young. Some were university-educated. All they did was fight and pray. They said they went into battle praying to be martyred. This is what they lived for, to die as martyrs and to establish an Islamic state in which all citizens would live as the Prophet Muhammad did, to live by the rules of the Book. They asked me if I wanted to become a suicide bomber or go to battle with them. They gave me a Turkish language Quran to read and a book about the jihad. There was no singing, no whistling, no women, no cigarettes. They rained curses on Erdogan, and Davutoglu, saying they were ‘infidels.’ They claimed that if Turkey sealed the border gates that were under IS control they would hit one Turkish village after the other and trigger a civil war inside Turkey. I was told that a qadi [an Islamic jurist] was reviewing my case. One of them said that my slaughter would avenge their brothers who were rotting in Turkish prisons. I was mentally and physically drained.”

These scenes were repeated until, as Aygun put it, his “guardian angel” appeared.

“It was a cold, dark night. A pair of men entered my cell. One of them sat next to me and began to talk. He said he knew what I was going through. He had fought with al-Qaeda in Afghanistan for 10 years where he had been held and tortured in an American detention facility for six months. I could tell he was older than the others. He told me to call him ‘Dayi’ (the Turkish word for maternal uncle). He said Turkey had strayed from Islam. He would loosen my handcuffs and bring me tea. We chatted normally, he was very kind. He said he was very saddened by my plight, because he knew I was a good person and that he had told the others to treat me well. Sure enough they did. One of the fighters brought me honey and bananas. He asked me if I wanted him to erase my Facebook conversations with women. He brought me extra socks so I could keep warm. He even stroked my cheek.”

But Aygun’s “good” days were short-lived.

“It was around my third day there. Dayi told me that the qadi had ruled in favor of my execution because I was working for a newspaper that was working against the interests of Muslims. He was very upset. Had the decision been left to him he would have pardoned me, he said. To spare me the dishonor of being killed by a firing squad he would cut my throat himself. I was a good Muslim, he said. I was paralyzed with fear. I needed to find a way to be shot dead rather than be beheaded. I would feign to escape; this would do it, I thought. ”

On the day Aygun was meant to be executed none of his captors showed up, not even to take him for his ablutions for prayers.

“Had they left me to starve to death? Had they all died in battle? The silence was unbearable.”

The silence was finally broken by a cat.

“It was meowing at the door. I wanted nothing more than to be able to touch that cat, to have it at my side.”

Some three days later, the fighters returned. They had been battling a rival militia. “One of the fighters asked me whether I wanted to see Dayi. I said I did. They [took] me to a room where they made their explosives. Dayi was lying on the floor in a pool of blood. I saw his face for the first time. He had a bullet mark on his forehead. He was dead. They asked me if I wanted to smell his blood. The blood of martyrs smells good, they said. I knelt by his side. I smelled his blood and stroked his beard. I was devastated. My only friend was gone. They moved to a new place. Now I would be killed for sure.”

Aygun says he owes his survival to the Turkish government. The national spy agency MIT had been working quietly behind the scenes to secure his release. It remains unclear whether IS had been demanding ransom money. In the end Ahrar al-Sham fighters rescued him from IS and handed him over to the Turkish authorities. But not before staging a trial of their own. Their qadi deemed Aygun to be “innocent.” “When I heard Davutoglu’s voice on the telephone [telling] me, that is when I knew I was finally free.”

Aygun is back at Milliyet. He has stopped drinking and continues to pray. Three months ago, he adopted a cat. “It’s a Siamese,” he says, smiling for the first time.