Erdogan out, Davutoglu in as AKP leader

After 13 years as Justice and Development Party chairman, President-elect Recep Tayyip Erdogan has handed over the post to his foreign minister, Ahmet Davutoglu. 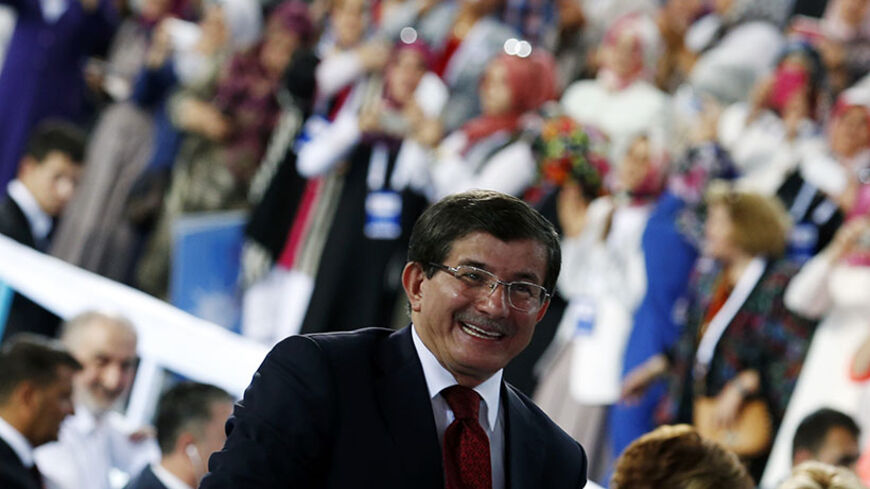 Ahmet Davutoglu greets his supporters in Ankara after being elected leader of the ruling Justice and Development Party (AKP), Aug. 27, 2014. - REUTERS/Umit Bektas

After serving for 13 years as chairman of the ruling Justice and Development Party (AKP) since its foundation, Turkish Prime Minister Recep Tayyip Erdogan handed over on Aug. 27 his chairmanship and premiership to his foreign minister, Ahmet Davutoglu.

Although presenting the party's congress with multiple candidates before announcing a successor to Erdogan might have been more befitting a democratic selection style, such a scenario was not even up for discussion. Erdogan choreographed the transition from his premiership to the presidency in such a way that the country will only spend one night without a government in place.

"God willing, we will give Davutoglu the mandate to form the government tomorrow [Aug. 28], and the new Cabinet will be announced on Friday [Aug. 29]," Erdogan told a crowd of 40,000 AKP supporters bused in from Turkey’s 81 provinces. People were visibly emotional, and many tears were shed as Erdogan took the podium for his last speech as party chairman and prime minister; he becomes president Aug. 28. “This is not a change in the mission, or in the spirit of our cause or in our ideals. Today, we are only changing the names,” Erdogan said, strongly emphasizing that Davutoglu will be a figure of real stature and power as prime minister. "I would like to especially stress this: Davutoglu is not a caretaker. Everyone should know that."

Both Erdogan and Davutoglu colored their speeches with numerous references to the country’s historic inheritance going back nearly a millennium, and noted that they are the descendants of those who defended Medina, Palestine, Egypt, Syria and Iraq at the cost of their lives. “We are not a movement or a party that has cut its ties with its past, its roots or its spirit,” Erdogan said, stressing that they carry the same spirit of those who founded the republic on Oct. 29, 1923. Still, Erdogan crystallized his critique of the early stages of the republic, arguing that it had gotten off track early on from its core theme of democratization and pluralism. “While the nation would have led the state, the state drew the road map for the nation to follow. The state intervened in everything about the people; it tried to order them, from their clothing to the music they listen to. … They denied all differences.”

Erdogan explained that the reason he has brought up this element of the past again is to draw the attention of people with differing political views or lifestyles, and for them to empathize with the long suffering of others over the decades. Davutoglu also echoed the same kind of historic references in his speech dating back as far as a millennium while even extending greetings to the rivers in the Balkans and North Africa, once Ottoman Empire territory.

Erdogan’s emotional dissent with the republic’s early era creates new set of questions about the path ahead. For instance, Faruk Kose, a columnist at the pro-AKP daily paper Akit, wrote Aug. 26, “Davutoglu should take concrete rebellious actions against the international system that is not producing happiness and security for Muslims.” According to Kose, Davutoglu should revive the caliphate. “A Turkey under Davutoglu should immediately end the treason of 1924 and take its historic responsibility by reviving the caliphate.”

There is certainly not even the slightest chance that Davutoglu will do that, but his claim of extending the country’s influence in the old Ottoman hemisphere is allowing such speculation to take place in the public domain. And as people grow distrustful of each other in this political atmosphere, those on the opposite side of the ruling party only become more suspicious about the limits of change that can take place in the country. “I will continue the restoration movement that we have been committed to for 12 years,” Davutoglu said. “No seeds of discord can be planted between us.”

However, Davutoglu’s foreign policy — summarized as “zero problems with neighbors” — has suffered setbacks since the revolutionary developments took over in some Arab states, putting Turkey in difficult spots in conflicts involving its Syrian and Iraqi neighbors. Still, Davutoglu spoke less as a minister in charge of foreign policy, and more as a politician who promised his party’s outgoing strongman that he will make sure the AKP wins enough of a majority in the next general election (scheduled for 2015) to assure a constitutional change. This would give Erdogan the opportunity to write a completely new constitution). If the AKP does win big, it will be only then that people will know for certain what kind of a constitution that the AKP desires.