With the Islamic State (IS) out to change the regional order, Gulf states ought to establish a security alliance to prevent this from happening. 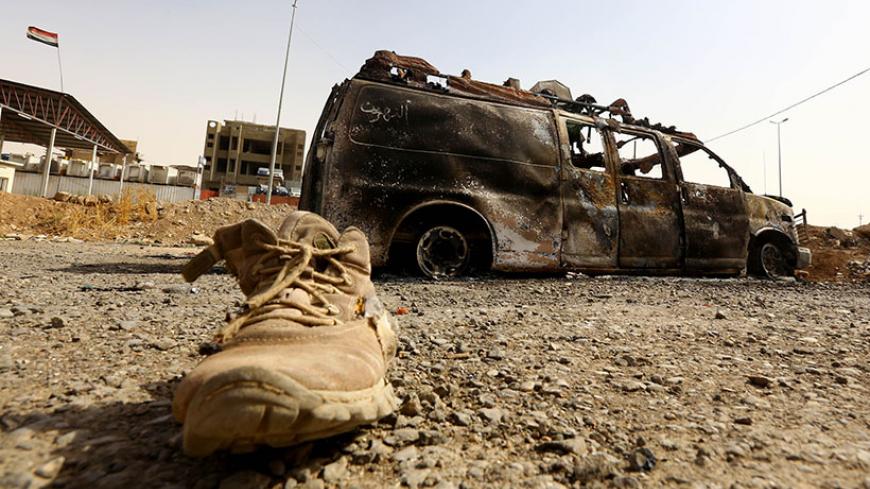 A burnt vehicle belonging to Iraqi security forces is pictured at a checkpoint in east Mosul, one day after radical Sunni Muslim insurgents seized control of the city, June 11, 2014. - REUTERS

Islamic State (IS) militants have killed more than 600 Yazidi Kurds in recent weeks. Over 100 women and children have been kidnapped and tens of thousands displaced from their homes. World powers have shown some sympathy and military transport planes dropped several tons of food and water in areas where Yazidis are stranded in the Sinjar Mountains in northern Iraq. The United States also used drones to carry out limited strikes on IS troops in the region. This is yet another chapter of the IS assault on minorities that had included the persecution of Christians in Mosul, who were forced to choose between paying Jizia tribute — a sign of submission to IS and its roles that does not regard non-Muslims as citizens of the state — and leaving their homes.

But this story is not limited to Iraq and Syria. Supporters of the al-Qaeda spinoff exist in every country in the region; in fact, in every country where Muslims reside. Beyond mere support, the extremist ideology has become a franchise where volunteers can simply subscribe to the cause of al-Qaeda and decide to carry out attacks to advance its agenda.

The rising influence of Islamist militants comes almost a century after the Sykes-Picot Agreement and other colonial arrangements and promises that has shaped Middle Eastern states since then. Islamists claim that the regional orders — including current Arab (and Muslim) states, borders, economic, social and educational systems, alliances and allegiances — were installed and are being artificially sustained to serve the interests of world powers through controlling natural resources of the region and keep Muslims in bondage, preventing them from reaching their true potential and the word of Allah from reaching the hearts of the rest of humanity.

There are elements of truth in the injustices of a world order that has manipulated the region and used its own political regimes to serve global powers. But many argue that the Islamist militant ideology could also be seen as yet another control mechanism, one that this time uses sectarian sentiments to weaken the unifying threads holding together the fabric of societies with the resulting conflict knocking down pillars of existing states and sending the entire region into chaos and turmoil for decades to come. In any case, the Islamist discourse is evidently unsuited to help Arabs or Muslims advance or alleviate the suffering of the people, because it breaks their societies at their core.

Out of self-preservation, the ruling families of Saudi Arabia and other Gulf states have realized the importance of preventing the collapse of the regional order. They stood up to face the militant groups for which they once were benefactors and may have provided support out of piety as good Muslims or in cold pragmatism for political purposes against socialists and progressives. King Abdullah bin Abdulaziz and rulers of the United Arab Emirates (UAE) recognized that IS and al-Qaeda pose an existential threat to their reign and to the Arab states at large. This is why their support to the Egyptian army and to Abdel Fattah al-Sisi was deep and financially generous, beyond any level of aid previously given.

But as cooperation between militants is global, it follows that to face their challenge effectively requires a regional approach and a higher level of cooperation between armies as well as counterterrorism and intelligence agencies. The Gulf states once relied, almost entirely, on the United States to lead security and anti-terrorism efforts guaranteeing regional order and their continued rule. But for many reasons, the United States now seems unsuited to continue playing that role, which means Saudis will have to work alone or find other partners. In fact, the United States, by malice, incompetence or differing interests, bears a large part of the responsibility of the collapse of the regional order.

This situation gives rise to a dire demand for the emergence of a regional security alliance where Egypt, Saudi Arabia, UAE and possibly Algeria’s armies and intelligence communities would cooperate, through a formal institution, NATO-style, to fill the vacuum that is gifting IS and the like with room for quick unopposed advances. Russia could become an important partner to this alliance. Egypt’s military thinks that while such alliance is important, it requires legislative approval to ratify a host of arrangements and details ranging from command structure and sovereignty issues to logistics and budgetary appropriations. Does this mean waiting until Egypt has a parliament? Since time is of the essence, Sisi can, if willing, use his temporary legislative powers, or use existing Arab defense frameworks. The Gulf already has the security alliance Peninsula Shield Force. Qatar continues to pose unresolved problems and may soon be forced out as it persistently fails to meet set ultimatums.

But while this emerging alliance is vitally necessary for the survival of these states, it may alone be insufficient. The chart of relationships, with green and red lines representing support or animosity between militant groups such as IS, al-Qaeda, Jabhat al-Nusra, Hamas, Hezbollah and regimes in Syria, Iran, Saudi Arabia, Egypt as well as other countries and blocs (United States, Russia and the European Union), is very complex. It shows that even among allies, one partner could be supporting a certain militant group or regime, while another partner of the alliance could consider the very same entity as a sworn enemy.

These conflicting intersections and confused relationships are not merely circumstantial. In fact, they represent different priorities and paradigms that must be addressed and resolved at this stage, if the proposed alliance is to work in the long term. At least conflicting priorities must be sorted even if conflicts cannot be resolved in the short term. I would argue that one of the main reasons behind this complexity, which prevents long-term survival of a pan-Arab cooperation, is the Saudi’s overemphasis on the Sunni-Shiite division. This division is certainly sectarian. One cannot wage an effective war against IS and al-Qaeda, which use sectarian sentiments as a motivational tool to garner support among populations and recruit fighters and franchisees, while using the same sectarian sentiment.

This is a historic moment of evolution for Saudi Arabia, to discard the Sunni-Shiite division as a basis for its national identity and alliances and adopt a “citizenship” approach, more or less similar to what binds Egyptians. It was this national feeling of citizenship, rather than sectarian identification, which provided Egyptians with a sense of comradeship allowing Muslims to denounce Muslim Brotherhood attacks on Christian churches after former President Mohammed Morsi’s removal and Christians to withstand the assaults as they felt they were political in nature rather than an assault on the faith. This was the bond that, perhaps once, unified Syria, Libya, Iraq and Sudan before the sectarian division broke those countries into pieces.

If Saudi Arabia can now make that paradigm shift, everything could be possible, including cooperation with Hezbollah, even Iran.